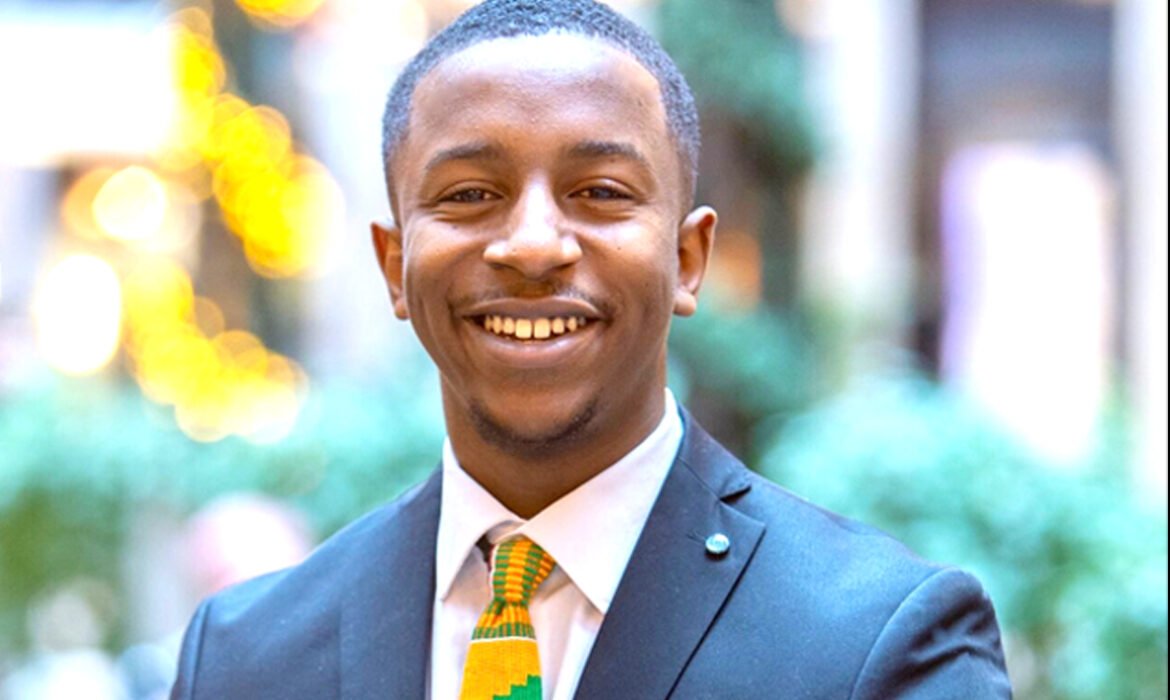 “To tackle issues faced by the global Black/African community, I refer to the quote by Kwame Nkrumah: “The forces that unite us are intrinsic and greater than the superimposed influences that keep us apart….” so it’s important for us to realize that liberating ourselves depends on recognizing, in the words of Dr. King, that ‘we are caught in an inescapable network of mutuality, tied in a single garment of destiny. Whatever affects one directly, affects all indirectly.’

As a humble student of our wise ancestors, I’m a fervent believer in recognizing the unity of struggle and the crucial need to build strong networks of solidarity and empathy that will help us tackle those issues on a common front.”
Meet Abdel Aziz Dicko. He is likely the first Black recipient of the prestigious Rhodes scholarship out of McGill University and possibly out of Quebec.

He stands among a select group of 11 Canadian scholars to snag the most sought-after scholarship in academia, which will take him to the University of Oxford in Oxford, England for post-graduate work in Development Studies and Public Policy and ultimately to a career in international law and diplomacy.
As a professed Pan-Africanist and self-described “global citizen,” the 21-year-old, says his education must be a vehicle towards “dismantle(ing) global systems of oppression and injustice.”

That’s why much of his work in the classroom and in the field are in areas of international relations, human rights and sustainable development, aimed at empowering vulnerable groups around the world, especially on the African continent.

In a wide-ranging telephone interview, Abdel told the CONTACT he intends to parlay the experiences he acquires as a Rhodes scholar to the benefit of generations of people who were subjugated by the virulent racist colonizer and misogynist who established the scholarships in his will about 103 years ago.

“Even before I began the quite extensive application process, I had to come to terms with the legacy of the scholarship, recognizing the negative impact Cecil Rhodes had on Africa and Africans,” he says. “But I knew that my commitment would not be to his name but to the people he disenfranchised. Most importantly, I knew that accepting it doesn’t mean compromising my values”

Abdel said his motivations to go after the scholarship was intensified after meeting and speaking with Prof. Arthur Mutambara, a past recipient who holds a Ph.D. in Robotics and Mechatronics and an MSc in Computer Engineering and who was part of the initial leadership of Zimbabwe’s National Unity Government together with Robert Mugabe and Morgan Tsvangirai.

He found a mentor in Prof. Mutambara who today, continues to distinguish himself by his achievements and contributions to Africa.

Abdel who moved to Montreal as a child with his parents from Cote d’Ivoire has been on a path of academic excellence since he started at St. Pascal-Baylon Elementary School in Cote des Neiges.
He also attended elementary school in Longueuil before moving to Ottawa with his mom, dad, and siblings where he completed high school as an honor roll student.

He was identified as an Ontario Scholar before enrolling at McGill in Political Science, where he continued to excel in academics as well as in campus life. He served on the executive of the Black Students’ Network, the African Studies Students’ Association and other campus groups.

Among the many awards earned was the Golden Key International Honor Society for Academic Achievement as well as a laundry list of honors for his prowess as a debater and his various youth leadership involvements.
Last year, he led a team of 25 McGill students to a first-ever victory at the inter-university Canadian francophone Political Science Games.

In the summer of 2019, he served as a research and human rights intern at the Commission on Human Rights and Administrative Justice in Accra, Ghana, a valued experience, he says, that heightened his awareness of the issue in that country and on the continent.

This past summer he interned with the United Nations High Commissioner for Refugees (UNHCR), working with the Protection Unit and gaining keen insights on Canada’s refugee policies as well as supporting the UNHCR’s anti-racism advocacy campaign in this country.

“It was a sublime opportunity to be able to participate in this initiative and a chance to speak truth to power on issues of anti-Black racism and social justice,” says Abdel, who was identified as a “global shaper” by the World Economic Forum.

He said it was a combination of those experiences that boosted his confidence of success. He also pointed to the months of preparations that he invested in the application process
He successfully moved past the first step, the internal selection process at McGill, when he became one of the university’s three finalists.

Then took his place among the ten provincial finalists, all top Quebec students attending universities across North America, shortlisted for the 11 spots that are awarded to Canada each year.
Abdel remembers Saturday, November 21, the day of the final interviews in front of a panel of eight, all leaders of industry, academia, and former Rhodes scholars.

“The questions were wide-ranging from politics, local and international to social issues. I found it to be quite a stimulating opportunity to share my ideas with the panel.”

The interview took place around midday. Later that evening, around 6:00 PM, he had another call from the panel under the guise that they wanted to conduct a follow-up.

“The question they had me for was: “if we were to offer you the Rhodes scholarship, would you accept it…?” It was pure joy. I hugged my mom. And we said a prayer.”

Abdel said he had to wait until the following day to tell his dad, who was out of the country at the time.
Up to today, the emotions are real.

“I’m grateful to my family for their support and their belief in me. My dad always believed that I would get the scholarship from Day One,” he says. “This achievement is very important not only for me, my family, friends, and McGill University but for the next generation of Black students, who know that they too can (strive) towards getting a Rhodes scholarship… because I did it.”