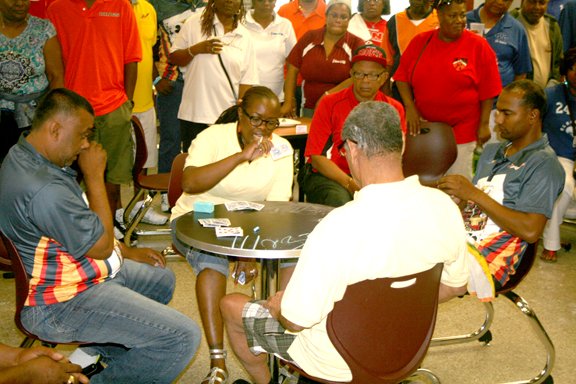 Hundreds will gather in LaSalle for a weekend of All Fours

It might be just a card game, but All Fours comes with a lot of over-blown emotion, so expect a lot of screaming and other expressions of joy, agony and defeat when hundreds of players gather at CEGEP Andre Laurendeau on Saturday, August 11 and Sunday, August 12 for the 2018 Montreal Invitational All Fours Round Robin Tournament.
According to organizer Henry Antoine, 20 teams from across North America, mostly Toronto, New York, Boston and Florida have already registered to compete in this year’s tournament.
They will be going after the more than $14,000 in prize money with the winning team going home with $8000 and the runners’ up $3000 and $1500 respectively. There will be more than a thousand dollars in consolation prizes.
The tournament, now in its 8th year, continues to grow in popularity and now has an added element with dozens of Domino players also competing for prizes.
All Fours is an old English card game that’s wildly popular in the Caribbean and most North American and European cities with large Caribbean Diaspora populations.
Two pairs of players representing two teams sit at a table and are dealt hands of six cards, which increase to up to 12 if a player, due to the lack of trump, begs for more.
They earn their 14 points towards a bull-eyes getting 1 Point for playing the highest trump, the lowest trump, or for winning Game or three points for hanging a Jack.
The game is extremely popular in many Caribbean islands and draws a lot of spectators who come solely for the excitement and talk about hanging jacks, begging, cross trumping, reneging, under-trumping, game and bulls-eyes, as well as a full compliment of funny chants.
The tournament is being staged by the Montreal United Sports and Cultural Association.
Registration cost is $850 per team which comes with free breakfast for the two days, as well as coffee and tea all day.
For information call 514-487-8953.