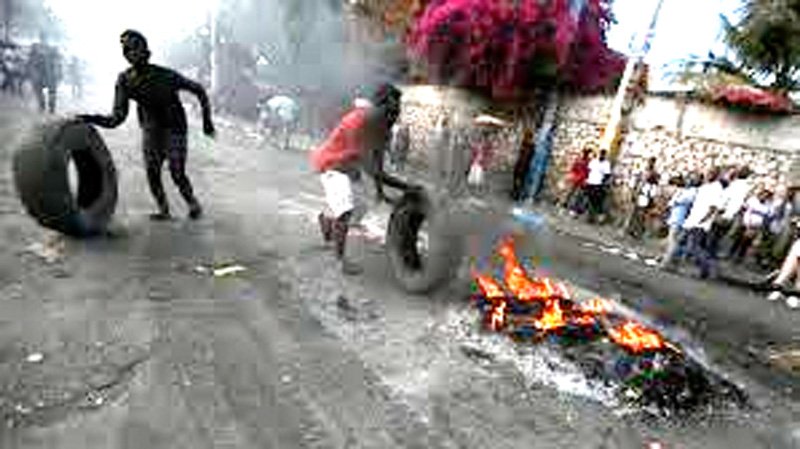 Demonstrators on the streets protesting shortages and crumbling infrastructure

“Where is the Petrocabe money?”
This is the question that protestors are asking as they take to the streets in Port au Prince, Haiti.
The Petrocabe, was money from a Venezuelan sponsored oil assistance program in which the oil-rich country gave money to Haiti to improve public services and infrastructure.
The protests, which started in 2018, have recently flared up again and have become increasingly violent with demonstrators  burning tyres on the roads and throwing stones demanding that President Jovenel  Moise, step down.
So far six people, including an 18-year-old protester were killed when police fire  lived rounds to disperse crowds.
Many Haitians accuse Mr. Moise and other  government officials of corruption.
But there’re claims that a large percentage of the demonstrators are supporting the opposition.
Moise, who has been in power since 2017 – has called for talks with the opposition, to no avail so far.
But he  reiterated his commitment to rooting out corruption. In early February he tweeted that his government would investigate the alleged misuse of funds and hold all those responsible accountable.
“No one will escape justice. It’s a moral and judicial duty,” he is quoted as saying.
Adding to this the serious crime unit of Haiti’s national police is also investigating several foreign nationals, including Americans, who were arrested in possession of semi-automatic weapons. Their intentions are still being investigated.
Adding fuel to the proverbial fire, on Wednesday February 13, as police were trying to manage the protests, there was a mass prison breakout where 78 inmates escaped.
Many of the schools have been closed out of concern for safety of students. Concerns are growing the new wave of protests that are being fueled by Haitians’ frustrations over the rising costs of living and an economy in shambles.
The mayors of Port-au-Prince and Petionville have cancelled the pre carnival festivities because of the troubling situation.
Haiti is the poorest country in the western hemisphere as 60% of the population live on less than $2 a day, according to the World Bank. And the situation is predicted to get worse with roads being blocked, trucks have been unable to provide diesel to stations outside Port au Prince.