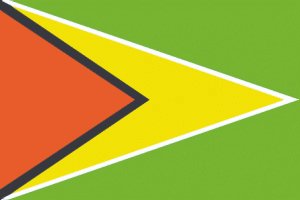 Throughout the month of May and well into June, friends and supporters in a jubilee celebration at home and in the Diaspora will join Guyanese as the nation marks it 50th Anniversary of Independence.
Today, the Caribbean country of 750,000 a founding member (2008) of Union of South American Nations and a cornerstone of the Caribbean Community Common Market (CARICOM), whose headquarters is based in its capital city, Georgetown, distinguishes itself as the only English speaking nation on the South American land mass.
As such, in the 50 years since it acquired its Independence from the United Kingdom, and 46 years as a republic within the British Commonwealth of Nations, Guyana has entrenched itself as a fundamental part of the Caribbean region.
And in the face of its ma

ny drawbacks politically and economically over the decades, the nation stands strong today anchored by a population that has been made resilient following repeated incidents of foreign intervention and global market fluctuations.
Guyana’s population prides itself on its exceptional diversity with people coming from India, Africa, Portugal and China to share living space with the largest Amerindian community in the Caribbean.
As stated in one of its promotional documents, the roots of diversity run deep and serve as a source of empowerment to them.
Guyanese were clearly living the word ‘diversity’ long before it became a favorite ‘shism’ of the West. There was also great pride in being part of a diverse, multi-talented, multi-cultural, multi-racial heritage of historical cultural significance, with people noted for their high achievements, excellent education, creativity, joy and endurance. A deeper take on this was: We are “a people, with many peoples, who survived centuries of abuse, slavery, indentured servitude, racism, oppression, colonialism and failed statehood – and still rise.”
So although there were times when racial divisions threatened to tear them apart, especially in the early post-independent years when political heavyweights such as Cheddi Jagan and Forbes Burnham harnessed votes from East Indians and Africans respectively by playing on the volatile emotions of race, the Guyanese people have been able to elevate those emotions to build a society that is slowly taking its rightful place in the community of nations.
And in so doing has produced several outstanding individuals who have been exemplary in their contribution to the progress of mankind.  High on that list stands people like Sir Shridath Ramphal, former Commonwealth Secretary General, and two world-renowned jurists: Madam Desiree Bernard, first female Chief Justice and Chancellor of Guyana, also the first female judge at the Caribbean Court of Justice, and Justice Mohammed Shahabuddin who serves at the International Court of Justice.
Other notables include respected trade unionist Nathaniel Critchlow, former cricket legends Rohan Khanai, Clive Lloyd, Basil Butcher, Roy Fredricks, Alvin Kalliecharran and Colin Croft, as well as renowned novelists the late Jan Carew and Edgar Mitellholzer and David Babydeen, and famous actor Sean Patrick Thomas, and the famed Tradewinds Band.
On Thursday May 26, 1966, Guyana secured its Independence, wrestling itself from the grips of colonial kingpin, the United Kingdom and other overseas powerhouses that were sucking the country dry of its resources such as bauxite, gold, sugar and rice.
With independence came the name change from British Guiana to Guyana, as it became the third smallest nation in South America flying the golden arrowhead, with narrow white and black strips along its sides, set on a green and red background with narrow white and black strips along the sides of the arrowhead.
It was born in political turmoil with a state of emergency in place, which then Prime Minister Forbes Burnham chose to extend well after Independence Day, forcing then opposition leader Cheddi Jagan to accuse the government of fear-mongering.
Because of suspicions about Jagan’s communist inclinations, the United States and Britain were never far out of Guyana’s political business.
And in the decades that followed, the country inched forward under various regimes, never fully capable of generating real wealth from its over-abundance of extractive resources to the benefit of its people.
Along the way the eyes of the world was cast on Guyana. In 1978, when 918 members of the American cult, the Peoples Temple, led by Jim Jones in Jonestown, died in a mass murder/suicide. Jones’s bodyguards also killed Leo Ryan, the only U.S. congressman ever killed in the line of duty.
Then on June 13, 1980, a bomb killed Walter Rodney, one of Guyana’s most illustrious historians and political activists, in his car at the age of 38.
Rodney, who earned a PhD in African History from the School of Oriental and African Studies in London, England, at the age of 24 was the author A History of the Upper Guinea Coast 1545-1800 and the seminal How Europe Under-Developed Africa.
In 1992, Guyana freed itself of the perception of fixed election when former United States President Jimmy Carter declared the vote “free and fair.” It elected the People’s Progressive Party (PPP), which led the country for the next 23 years. The party benefitted from the support of the majority East Indian population who makes up about 43 percent of the population.
Change came on May 11, 2015, when Army General (retired) David A. Granger lead a multi-ethnic, multi-party coalition, A Partnership For National Unity-Alliance For Change (APNU-AFC), to victory in a general elections with a majority, 33 of 65 seats in the National Assembly. He became the eighth president of Guyana. The prime minister is Moses Nagamootoo.
Today, 50 years after Independence, Guyana hobbles forward trying to free itself from the social blight of crime and corruption that has been described as “endemic.”
However, undoubtedly  the way into the future  will be fueled by the passion of the Guyana people at home and in the Diaspora who, like their fellow English Caribbean peeps, never miss an opportunity to have a good time.
They are described as straightforward, hardworking, cordial and nice to a fault.
At home, Chutney music and nice drinks flow for Mashramani (carnival) and other festivals; overseas they’re in everything.”
Notable Guyanese among us in Montreal are: Dr. Dindial Ramoutar, oncologist at Hopital Maisonneuve Rosemon; Dr. Keith Matthews, urologist, St. Mary’s Hospita; Dr. Rory Wills, professor, Concordia University; Archdeacon James Bennett, St. Paul’s Church; Dr. Ivan Harding, Retired School Teacher, Riverside School Board; Dr. Ian Gorin, family doctor; Yvonne Sam, columnist, secondary school teacher and charge nurse; Babita and Dan Parsram, owners, Caribbean Paradise Restaurant; Herby Innis at Samail Image; Bunty Bikari at Auto-Tronic, Mr. Sidney Sharper, Sidney Reliable Shipping Service; Brahma Melaram, certified real estate broker; DJ Calm; DJ Tony; and of course Joy Bishop, a lifelong member of the Montreal Community CONTACT family.