Eight years of “faith and works” 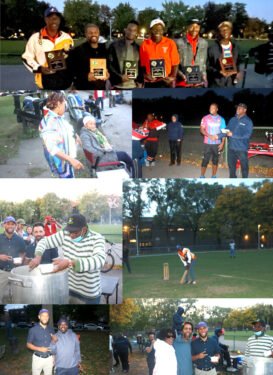 Every November for much of the past three- or four-decades members of Hilltoppers Sports and Cultural Club gather with hundreds of friends and supporters for their annual banquet.
One of the highlight of the evening has always been the recognition and presentation of awards to deserving members who participate in their competitive and non-competitive sports and other activities.
In 2020, the COVID-19 outbreak put a stop to the annual celebration, as it did again this year.
But the pandemic could cramp Hilltoppers celebratory style completely so on the afternoon of October 9, members along with dozens of friends and supporters gathered at Confederation Park in western NDG for make up for cheated opportunities.

They had ample supply of food and beverages, including an over-sized mega pot of corn-soup on a camping stove tenderly prepared and served piping hot by Gilligan Elias , who answers only to the name “Crash.”
Old talk and nostalgic ruminations were in free flow.
Groups of players participating in games of dominos or card were hunch under trees in one section of the park.
Two teams of the more daring softball cricketers squared off for a match to establish some bragging rights.
And a table-full of trophies and awards were on hand to reward those who served the club well on and off the field for 2021.
In the crowd were several politicians, hoping to score in the upcoming municipal elections and enjoying the soup.

Believe it or not, in the midst of the ruckshion, the loud talk, boasting and even some politicking, the formal part of the evening flowed nicely into the presentation of the awards.
The formalities were handled by the club’s communication frontman Adlai Caesar.
And the awards went to: