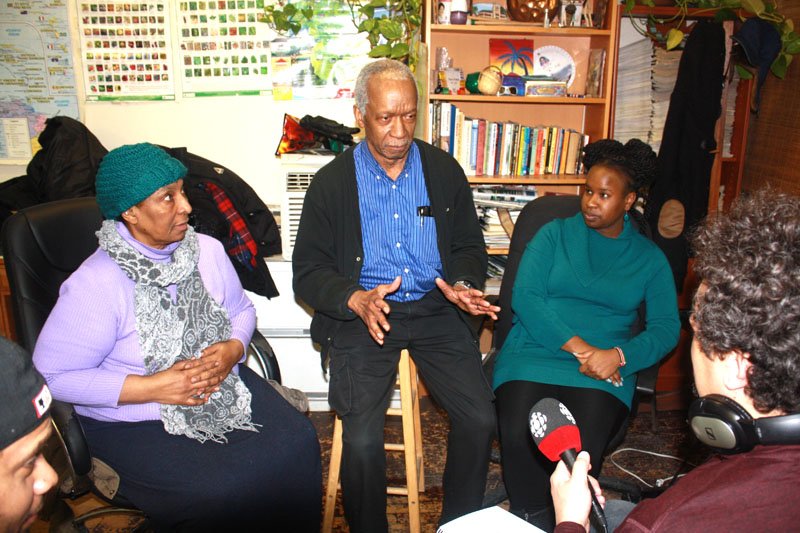 Black History Month celebrations took a special turn this year with the return of one of its alumni, Duke Eatmon, to the offices of the CONTACT on Monday, February 4.

Instead of his usual reams of paper profiling personalities or documenting events on the cultural scene, Duke was toting the big microphone of Canada’s national broadcaster, CBC, in this instance Home Run, the station’s drive-home show, where he serves as a music/entertainment columnist.
Duke was at the CONTACT to kick off a series of on-location broadcasts he’ll be doing throughout February to mark Black History in Montreal.
It turned out to be a special three-hour stay with intermittent on-air “hits” with managing editor Egbert Gaye, editorial assistant and columnist Novel Thomas, graphic designer and layout specialist, Emar Mitchell, columnist and office manager Rosie Awori, as well as longtime advertisers and supporters, real-estate agent Kenwyn Smart, and Pastor Beverly Deroy of Montreal Deliverance Church of God 7th Day.
It included conversations about the newspaper and its service to Quebec’s Black and Caribbean community for the past 27 years, as well as Black History.
Eatmon started writing with the CONTACT in 1998, and his “on The Record” column became big-time popular with readers who couldn’t get enough of his encyclopedic knowledge of musical aspects of arts and culture.
He started at the CBC 15 years ago as a freelancer and today serves in various capacities, including as a fill-in host.