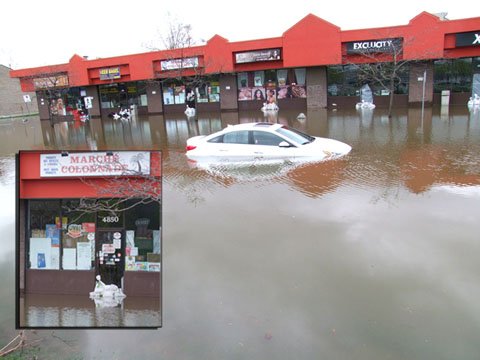 That Wednesday morning, May 3, the water was rising steadily outside of Tim Sobers’ store, Marché Colonnade, at the corner of Rene Emard Street and Pierrefonds Boulevard in the West Island.
He had just returned from the market and was about to stock the shelves of the busy little outlet that carries a variety of fresh vegetables, meats, fish, spices and other foodstuff popular with people from the Caribbean, Latin America and Africa, when the authorities came and advised him to leave.
The steady rain and overflowing sewer system had brought the water up to dangerous levels and the City of Pierrefonds thought it best to order an evacuation of the area and shut down the surrounding streets.
Sobers told The CONTACT it was the last he saw of the inside of his store for the next 10 days.
When on Saturday, May 13, he was allowed to go back into the store he was faced with two days of cleaning and getting rid of the fridge loads of perishables that resulted from Hydro Quebec cutting the electricity at the height of the disaster.
“It took us two days of non-stop cleaning to get the store ready to reopen on Monday (May 15), and we know that we were among the lucky ones because some of the other businesses were hit much worse than us. At one point there was over six feet of water not too far from the store near to the loading docks of  Mourelatos Grocery, so we count our blessings.”
When The CONTACT visited the area, Pierrefonds Boulevard was a lake between Fredmir and St. Jean Boulevard. At the front of Marché Colonnade, much of Rene Emard Avenue was also under water, with what appeared to be a brand new white car abandoned and left floating in the four to five feet of water.
At the time we spoke, Sobers said he had not been able to assess his losses, but like so many other residents and businesses, his insurance will not be covering any of it.
“It’s very difficult to have flood coverage with business insurance,” he says.  “Also,  my broker was very forthright in telling me that they couldn’t do anything for us because even if there was some sort of coverage, the extremely high deductible meant that we still wouldn’t receive any thing.
I can’t say that it was totally unexpected because we had a similar situation with the ice storm (1998). Even with the city back then, we went through the compensation process: providing invoices, pictures and everything; we still didn’t get a cent.”
Sobers said he expected that he might have been able to get at least some “loss of wages” insurance coverage for himself and one other fulltime and two part-time employees, but that too was quickly  denied by his broker.
The federal, provincial and municipal governments have all promised  financial assistance to home and business owners who have suffered losses but Sobers has been there before and he is not holding his breath.
“So just as we did after the ice storm, we have to count our losses and move forward.”
The historic floods that inundated the area during the first two weeks of May forced the City of Montreal and other municipalities to issue a State of Emergency that lasted for seven days, caused the closure of dozens of businesses, and drove hundreds of residents from their homes.
Sobers said although the water reached the front door, it was kept from flooding his store and wreaking additional damage by a small mountain of  sand bags, old carpets and whatever other material he was able to put his hands on, before evacuating the store.
His challenge now that he has reopened is to restock his shelves and continue to provide customers with high quality fresh produce that they have become accustomed to.
“Ever since we opened our doors in 1993, I made it my business to have good quality products in the store…if I can’t sell it, I should be able to eat it,” he says. “We have to continue to do that as much as we can.”
Working 16 hours a day, sometimes seven days a week, Sobers built Marché Colonnade into a haven for West Islanders shopping for products that have been part of their culinary heritage. Many come from as far off as Vaudreuil and outlying communities who find joy shopping at a place that’s always sparkling clean, and where top quality goods  are guaranteed.
After more than 24 years, Sobers is banking on the loyalty of his customers who have brought him this far, to help see him through the high waters of   the flood of 2017