Damien Sneed’s We Shall Overcome coming to Place des Arts 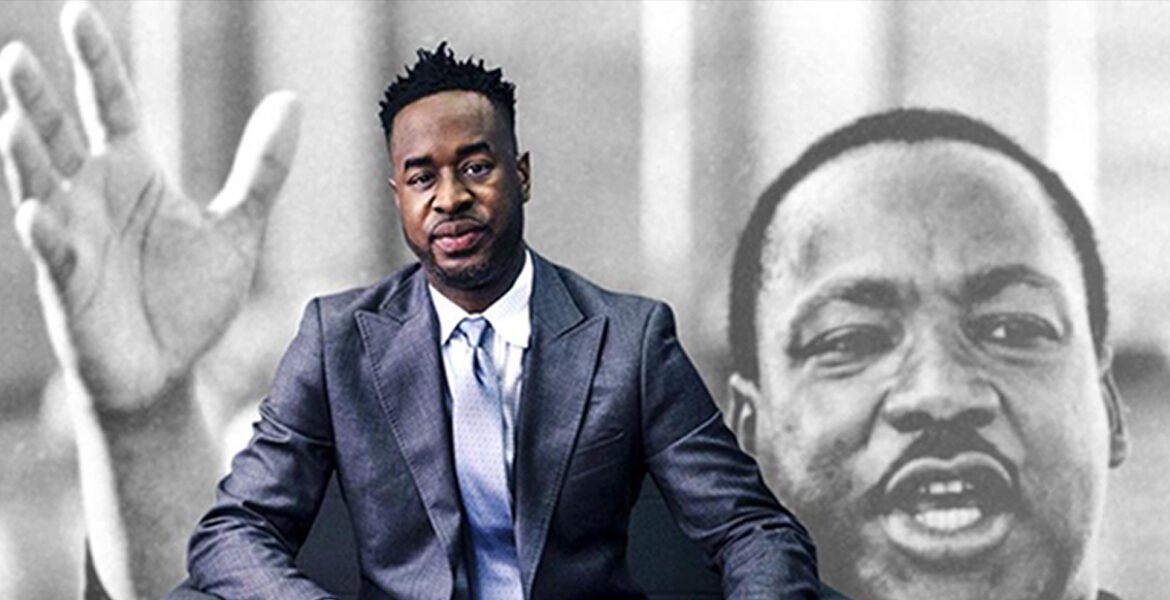 As a young boy growing up in Augusta, Georgia, Damien Sneed felt a strong connection to Martin Luther King Jr., the civil rights icon who was born about two hours and 15 minutes away in Atlanta.
“I’ve always seen Martin Luther King Jr., as a genius that was a global voice for justice,” says Sneed, who wrote more than his fair share of reports and features on his idol in the classroom and in churches as a young man. “I’m not sure that people value what he did for the world.”
It’s not surprising then that Sneed—who himself is recognized as something of a genius, a musical prodigy that mastered the piano at five years-old and directing his church choir at eight—has written a defining musical tribute to the life of Dr. King, titled “We Shall Overcome.”
In a telephone conversation with The CONTACT, Sneed, who is recognized as one of today’s most gifted musicians said he drew inspiration from the words and action of Dr. Martin Luther King Jr., to fashion a musical production, which weaves together a multiplicity of genres that include traditional gospel, modern gospel, classical, jazz, Broadway and spirituals from the song books of such greats as Aretha Franklin, Wynton Marsalis, Duke Ellington, Stevie Wonder, Nina Simone and Donny Hathaway.
The production is described as a musical “interwoven with recordings from Dr. King’s speeches.”
As a highly talented pianist, organist, vocalist, conductor, composer, producer, arranger and arts educator, Sneed, who has evolved into what has been described as a multi-genre recording artist, brought significant musical heft to “We Shall Overcome.”
A long ways from his prodigious beginnings at the Augusta Good Shepherd Baptist Church, and John S. Davidson Fine Arts School, Sneed honed his extraordinary talent at some of the most prestigious institutions in the US, including Howard University where he earned a Bachelor of Music – Piano Performance and at the Peabody Conservatory of Johns Hopkins University.
He also went on to earn a Master of Music in Music Technology at New York University and added Scoring for Film and Multimedia, and the Manhattan School of Music.
His resume also include working and collaborations with greats such as Wynton Marsalis who he counts as a long-standing friend, Jessye Norman, his godmother, as well as Stevie Wonder and Ashford & Simpson.
He also toured extensively with Aretha Franklin, whom he credits for teaching him a lot about music, business and life, and with Diana Ross, whom he describes as the ultimate diva because of style and extraordinary talent.
In the Gospel arena he served as musical director for heavyweights such as Donnie McClurkin, Hezekiah Walker, Marvin Sapp, Karen Clark Sheard, Dorinda Clark-Cole and Kierra Sheard among a laundry list of others.
He also served as music director in season four of BET’s popular singing competition show, Sunday Best.
In a still blossoming career, Sneed has already placed his musical stamp on multiple genres from Gospel to Jazz to Classics to Contemporary American Music to Musical Theatre.
Even before he’s asked he answers the question: “I get bored easily playing one particular style of music, and I find it so much more rewarding to explore the various genres.”
And he has a laundry list of awards and commendations to show for his spectacular versatility, which was recognized in several New York Times feature articles.
In 2014 he received the prestigious Sphinx Medal of Excellence honor, which is presented annually to emerging Black and Latino leaders in classical music. It came with a $50,000 endowment.
Sneed told the CONTACT that he put together the musical framework “We Shall Overcome” in 2017 and launched it at Jenny’s lounge in New York.
Then he took the production with its five singers and three musicians on a 36-city tour last year, which included a stopover in Toronto.
This year’s tour will include performances in Montreal, Calgary and Vancouver.
Sneed says he’s super excited about playing in this city.
“I’ve been looking forward to visit Montreal, the birthplace of the great Oscar Peterson. For a long time I’ve heard a lot of its beauty as a city and the warmth of the people.”
Sneed will be performing at Théâtre Maisonneuve, Place des Arts on Thursday, January 16, at 8:00PM.