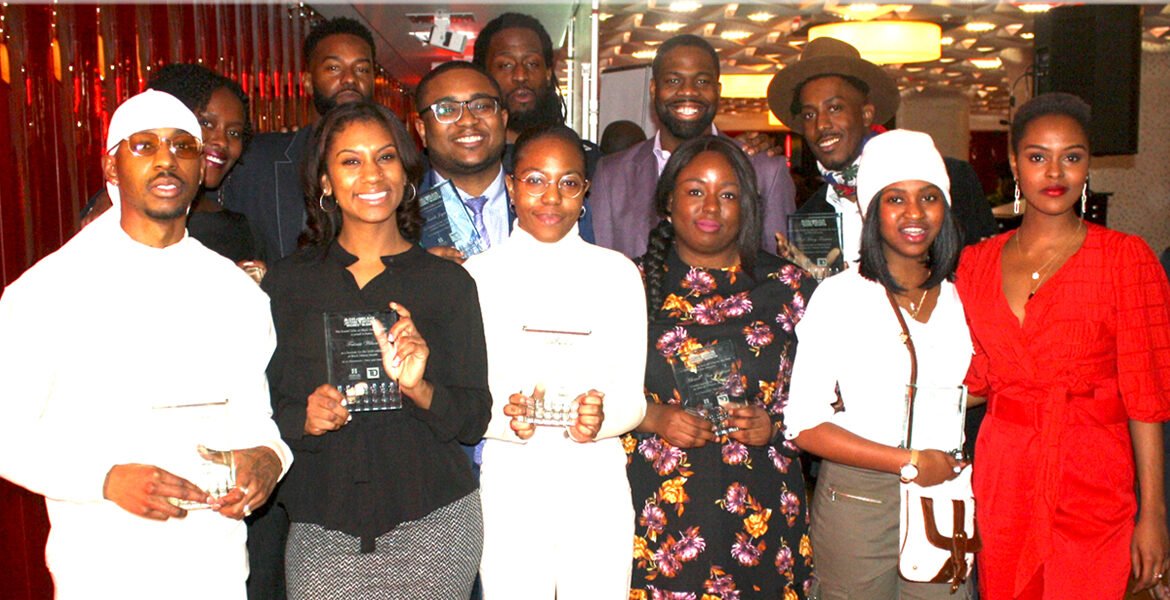 On January 29, a cross-section of Montrealers gathered at Salon Urbain, Place des Arts for the launch of Black History Month 2020. at the Place des Arts.
It was organized by The Round Table on Black History Month and kicks off with events and activities showcasing the presence, contributions and achievements of Blacks in Montreal, across Canada and around the world.
Those gathered for the launch heard messages from Michael Farkas, president of the Round Table and from Deputy Mayor of Montreal Sterling Downey on behalf of Mayor Valerie Plante.
The theme of this year’s celebration is Here and Now and shines a spotlight on the role of our youth in helping to shape the future of the Black community in Montreal and beyond.
Farkas spoke directly to them saying:
Your expertise and contributions are as vital and essential as the equality of rights, justice and the law, which must protect all people of African descent and allow them to live in a well-preserved environment, and contribute to science and digital technologies, here and now.
And he challenged them continue clearing a road that set for us by other generation pathfinders:
If the ‘60s were the beginning of an awakening of our consciousness, here and now 50 years later, it’s you—this year’s young laureates—who are the inheritors of the struggle for civil rights.
Downey who first gained notoriety for his work with vulnerable communities in the southwest districts of Montreal, told the gathering that Blacks have been repeated failed by governments and acknowledged the resilience of our community and those who advocate on behalf of it.
Another highlight of the launch was the introduction of the youthful Laureates of 2020, who are:

Hanna Che & Harry Julmice : co-founders, leaders and curators of Never Was Average. The duo has a long history as entrepreneurs in the fashion world and were former owners of Boutique 363. They launched Never Was Average in 2017. With their team of Montreal-based creatives, Hanna and Harry create and showcase community-based cultural and artistic projects that have a strong social impact.

Paul Harry Toussaint: who is an emerging celebrity chef. Has accumulated wide-ranging experience in some of the best cuisines in town, including the famous Toque . In 2017, he joined the team at Agrikol as its executive chef. A favorite among locals and international celebrities alike, Agrikol is a tribute to Haitian gastronomy and homage to the country’s rich culture. Then in 2019, Chef Paul added his name to the list of well-known Montreal chefs at the new Time Out Market in order to showcase the epicurean delights of his country of origin.

Oumar Diallo: is the director, Fintech and Innovation at Quebec’s financial markets authority (AMF). He is perfectly trilingual (English, French and German) and has more than 11 years of experience in strategic and regulatory analysis, risk management and financial technology. He held senior positions with PricewaterhouseCoopers (PwC), the Laurentian Bank of Canada, the United Nations Industrial Development Organization and The Economist. He has served on several boards and selection committees, including that of Concertation Montréal’s Group of Thirty. He is president of the African Business Network in Canada (REPAF).

Shanice Nicole: is a Black feminist educator, facilitator, writer, and (out)spoken word artist. Her writing and work intimately explore oppression, freedom, and the many layers of her Black womanhood. She is the curator of free community resources, such as Jobs & Things, the Black Foundation of Community Networks (BFCN) Scholarship Directory, and All Black Everything in Montreal—and is also the author of children’s book Dear Black Girls, scheduled for release in 2020 via Metonymy Press.

Fatima Wilson – grew up in a musical family and it was inevitable that one of the Wilson children would continue what their father, Salah Wilson, started 30 years ago. Fatima with 26 years experience, has been fortunate enough to continue his legacy and see it grow into something beautiful that touches the lives of so many. She has been teaching at several EMSB schools for the last 14 years. To her, music is already a beautiful art, but the opportunity to also serve as a model for the younger generation has given her more than she could have ever asked for.

Rito Joseph – A self-taught guest speaker and tour guide. His approach, which seeks to gather culture, history, the arts, and music on a single platform, provides a fun way for people to deepen their knowledge of the African-Canadian community and learn more about our ancestors. Rito uses his presentations, workshops and tours to educate those interested in learning about history and those who wish to bring about change in their communities.

Fatima Bah: is a young student of Guinean origin from Louis-Joseph-Papineau High School in Saint-Michel. She has overcome judgment and prejudice to follow her passion and inspire young people in her neighborhood to get involved in the world around them. Fifteen year old Fatima has had a passion for getting young people into civics and has campaigned for them to be active, responsible and involved, while also fighting for equality for all and against social biases and prejudice, particularly those directed toward refugees and women.

Isaiah Joyner: is a soon-to-be-graduate of Concordia’s Finance Co-op program through which he has completed internships at Bombardier, Pratt & Whitney Canada, and Sun Life Financial—and was chosen out of more than 3,000 students for the 2018 Co-op Student of the Year Award. Isaiah is currently the External Affairs & Mobilization Coordinator at the Concordia Student Union, where he works daily to support and represent over 30,000 students. In addition to maintaining great academic standing, Isaiah is an active ambassador within the Co-op community. He serves a mentor and volunteers to promote the Co-op at open houses, and was one of the actors in the new Co-op admissions video.

Paul Evra: is a graduate of Université de Sherbrooke in International Relations and Applied Political Studies, with a background in communications, and has been involved since his youth with the population of Saint-Michel, where he grew up. His journey, filled with experiences that are a testament to his dedication to the community there, have made him a real driver of change. He sits on the roundtable on diversity at the City of Montreal. As executive director of the Centre Lasallien de Saint-Michel, his efforts are directed at education and the fight against social inequalities.

Kharoll-Ann Souffrant: is a PhD student in social work at the University of Ottawa and a Vanier Scholar. Her thesis deals with the #MeToo and #BeenRapedNeverReported movements, as they relate to sexual assaults experienced by racialized women in Quebec. In addition, since 2015, she’s been giving talks on mental health. She was notably invited to speak at TEDxQuébec, WE Day Montreal, and the opening panel of the Quebec government’s Jeunes et Santé mentale (“Youth and Mental Health”) forum. Kharoll-Ann has received several awards, including Young Woman of Distinction (Montreal Women’s Y), the Relève Prize (OTSTCFQ) and the Terry Fox Humanitarian Award. In 2019, CIBWE included her on a list of the top 100 Black women to watch in Canada.

Svens Télémaque: ranks as one of the most inspiring speakers touching youth empowerment. After multiple arrests and brushes with death, he gave up a life of drug trafficking. In 2007, he relocated to Montreal and co-founded L’art Selah, a poetry collective that provides hope to listeners. As a social entrepreneur, Svens has been recognized as a regional finalist for Startup Canada, and has received the Community Leadership Award, among other honors.

Mariana Baldé : has a passion for art, culture and entrepreneurship. She wants to provide the new generation with other models of success and freedom. Women’s issues are very important to her, so in 2017 she founded CRI, a committee dedicated to studying and taking action against banned social practices. She also coordinates several initiatives including FITAF; the Handi Festival; and FED, a forum for diverse women entrepreneurs. Mariana’s social involvement has already won her recognition, including by RECOPAC; Montreal’s African Fashion Show; and Nuit de l’Excellence afro-antillaise (“Night of Afro-Caribbean Excellence”). She’s an exceptionally creative host, storyteller and speaker who addresses topics like growth, capacity building and empowerment.