A refuge for growth and reconnection 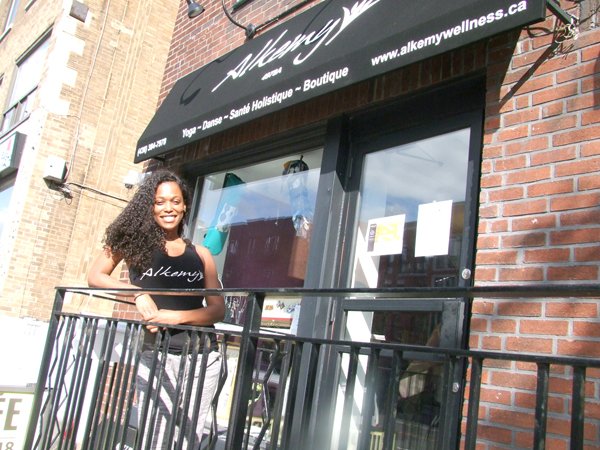 Kassandra Kernisan is unwavering in her belief in the practice of Kemetic Yoga, described as a healing and regenerative system that combines physical movements with controlled deep-breathing and meditation.
She says this practice, which has its roots in ancient Egypt, and is said to have “fueled the creation of the Kemetic civilization that spawned western science, philosophy and religion” holds the key to rejuvenation in our community individually and collectively.
“Our community is most in need of yoga and its many benefits,” she told the CONTACT in a recent interview at her newly opened Studio Alkemy Yoga & Wellness, 4978A Queen Mary, Montreal. “But sadly we are the least likely to seek the healing and growth that come with yoga.
She said one of the reasons for that, is the fact that we never really had our own space and many Blacks tend to feel ill-at-ease practicing yoga outside of their comfort zone.
A few months ago she opened the doors of her Studio Alkemy and says she will do her best to make it a place that is welcoming to our community and to other Montrealers.
Part of her immediate focus is to reach out to a segment of our community that stands to benefit most from the primary offering of Studio Alkemy. She says more than most groups in society, young Blacks are under a lot of stress in almost every aspect of their lives.
“My hope is that I’ll be able to attract a steady flow of Black youth because I think they especially are in need to know that Kemetic Yoga can help them physically and mentally.
Also, I truly believe that not only are they going to know themselves and achieve more, but it can also heal their bodies and protect them from disease. It can make them feel invincible.”
Kernisan holds a Marketing degree from McGill University, and a certification as a Naturopath from one of Quebec’s leading institutions.
She spent six years as a product manager at Avon before launching two businesses

EnVie Natural Health offering naturopathic consultancy and educational workshops and Pure Violet Natural Cosmetics, “a line of 100% natural cosmetics made with raw butters, essential oils, healing herbs and vitamins.”
Her all-encompassing belief in Kemetic Yoga has led her into this, her newest venture, which she says is an avenue to holistic and spiritual satisfaction for us as a community.
Kemetic Yoga was part of the balance that dictated the lives of our ancestors.
We are at a point today where we have become disconnected from our history; this is a path to reconnect and help erase the stress of today.
Studio Alkemy offers regular courses in Kemetic Yoga together with a range of other yoga practices, including gentle hatha yoga and ashtanga yoga and vinyasa flow yoga, piyo life fitness. They also offer dance courses such as kizumba, soca fitness and nu djanm dance.
Kernisan’s promise us that Studio Alkemy will stand as a refuge where lives can be changed.
Info.: (438) 384-7978