They weathered THE STORM Now they are Here 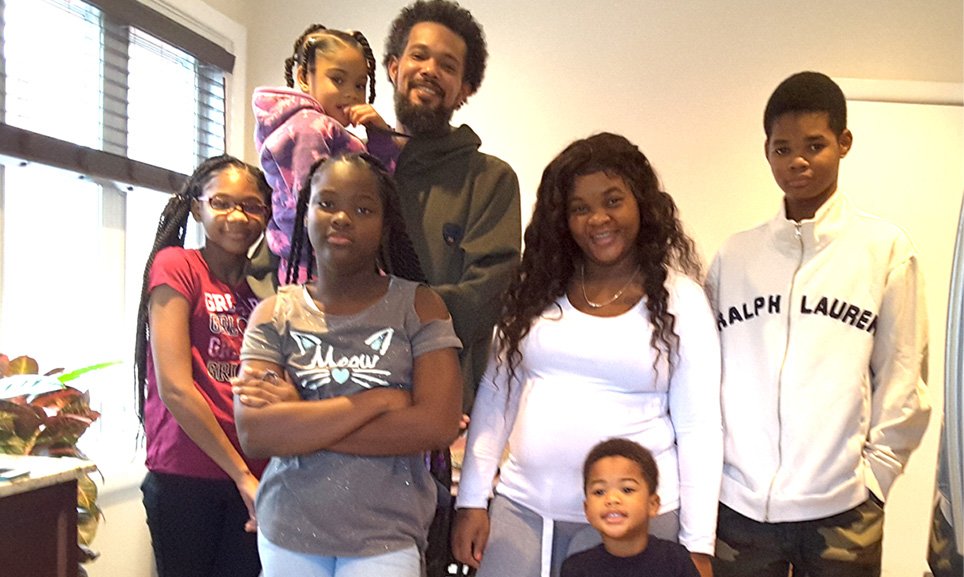 Family of seven is seeking help

Hurricane Dorian was the most powerful storm on record to hit the Bahamas. Between September 1st and 3rd, it parked itself over part of the country for nearly two days as a Category 5 storm with wind gusts topping 320 kph (200 mph), pounding and pounding.
According to the United Nations 76,000 people in Grand Bahama and the Abaco islands have been left homeless by the hurricane and are in need of help.
Survivors describe the hard-hit Abaco Islands as unsafe and uninhabitable, tens of thousands forced to flee.
“It seemed like a giant was taking a big broom and sweeping all the water into the land, the water just wouldn’t stop.” Howard ‘LJ’ Carey and his family of six were those fortunate enough to survive the hurricane. The Freeport Grand Bahama resident recounted the harrowing event to the CONTACT.
He, his pregnant wife and their five children, “by God’s grace,” made it to Montreal with just the clothes on their back.
After a day virtually homeless and hopeless on the streets of Montreal, they found refuge at the home of someone they now call their “guardian angel.”

Today, penniless and uncertain, they’re hope Montrealers will extend a hand to help them start a new life.
The experience that drove them here from a broken down family home to a shelter and eventually to the streets of Montreal is a long and frightening one:
“ When the storm started we shut ourselves in the house, the water started coming and when we opened the front door we knew we couldn’t make it if we stayed inside. My wife and I had to tie the children to us and keep close and start swimming outside the house to where a friend of ours was waiting with his truck.”
“It wasn’t easy,” his wife, says, “ we were swimming and the waters were murky full of filth we could barely see and the winds had blown in fish and sharks from the sea. Some parents watched as their children were eaten by the sharks. ”

She stops as her eyes wander away as she recalls the horrors.

“ Its only thanks to God that we managed,”

They went to his wife’s sister’s house and ten minutes after that her sister’s house was soon flooded. They called back the same friend, and ended up staying at his house alongside five other families until the storm passed.

When they went back to their home they were horrified by the sight that greeted them.
“My car was completely submerged under water. Half the roof was gone everything was gone. We had nothing, there was nothing,” LJ says.

Their children all term the hurricane as ‘traumatizing.’ “We wanted to live and we were scared. When the water was coming and daddy had to tie us with the rope.” Their daughter Jade narrates.
They finally went to a shelter in New Providence while there, the stark realization that they had nothing begun hitting them.
“Even when this is over, we still have nothing.” It was at this point they decided to come to Canada as refugees hoping their lives can change.
Their Canadian chapter was not as easy as they thought. When they arrived in Montreal they were denied accommodation at the YMCA reason being that they did not demand for refugee status at their initial point of entry, which was Toronto. However, they weren’t aware of this as their ticket indicated their final destination was Montreal and they were only in Toronto for a lay over.
With only $250 to their name the Howard family spent their first night in a hotel and by the next day after taking taxis back and forth they were out of money and also still with no place to stay.
“ We knew no one here and have no where to go I was so frustrated I just broke down and cried. We had no warm clothes and no food.”

He remembered a cousin he had in the Bahamas who had once told him that his girlfriend lived in Montreal. Now at his wits end, LJ called his cousin to see if his girlfriend could be of help.
The girlfriend called her mother who took it upon herself to bring the family of seven, soon to be eight, into her home.
“She was like a guardian angel. She picked us up and has housed us since then.”
Sonovia is seven months pregnant and she is in dire need of items for the baby on the way. They have a meeting with immigration Canada on the first of November and will hopefully get their refugee status and hopefully soon start working.

“I like being able to provide for my family and as a carpenter and painter I know I can find a job and start working,”
LJ states.

The family is optimistic about their life in Canada. The children already say they don’t miss the sounds of the sirens that once filled their old neighborhood and the sense of insecurity that they once had is gone.

“I can walk around the block here, before it was impossible because it wasn’t safe where we were,” their oldest child, Jayden says.

The Howard family with children aged, from 14-2 years old are looking to Montrealers to help them as they settle into their new lives in Canada.
Donations can be coordinated through Shania Thornhill -514-883-9498