The Earth Centre provides a philosophical framework for social activism 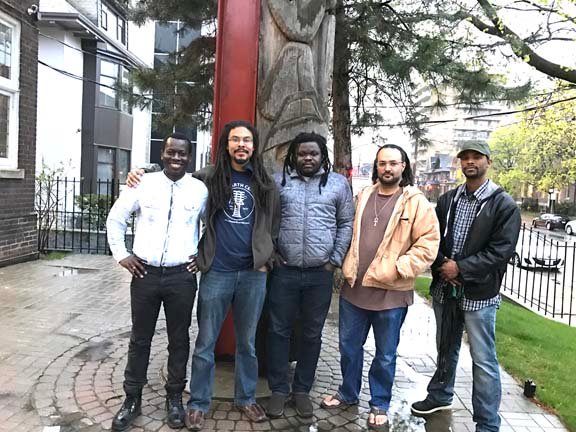 “It’s what colonized people who need to re-conquer their roots have been praying for centuries.”

Here in Montreal and around the world, the call of Kemetic culture and African spirituality is still faint, but persistent, especially among many people of African descent who harbor an enduring quest to reconnect with source in these days of spiritual uncertainty.
That search is leading a small but growing group of Blacks in cities around the world to look within the walls of an institution called The Earth Centre for the knowledge and guidance that will make their lives meaningful.
The Centre is an emerging international organization described as a place “dedicated to preserving traditional culture.”
It was established in North America by a high priest out of Burkina Faso by the name of Neb Naba Lamoussa Morodenibig, who is recognized as a Dogon, a group of individuals whose way of life traces back to the time of the Pharaohs in Eygpt.
They are also recognized as an elite group of knowledge-keepers with a duty to preserve the principles and values of those timeless traditions and culture.
Prophet Naba died on July 21 2008.
In Montreal, Guy-Olivier Musafiri is at the vanguard of the drive to establish the movement here.
Born in a refugee centre in Kigali, Rwanda, he moved to Canada with his parents as a seven year old.
Throughout his life’s journey, first as a student, then as what he describes as an African-centred adult, his search for spiritual fulfillment has lead him to the Earth Centre.
He says, “It represents a bridge between Canada and real Africa, and it also provides an alternative to the theory of the Indo-European-Greek cradle of civilization.”
And he is about to set up the institution here. He draws a lot of inspiration from his peer, Nekhitem Kamenthu, who is the head scribe and financial officer of the New York Earth Center.
As one of the earliest adherents in the U.S., he is excited about the prospects of the Earth Centre taking root in North America and what it means for Black spirituality.
“It’s an authentic and complete initiation back into the culture (and) what colonized people who need to re-conquer their roots have been praying for centuries.”
And because studying and traveling to Africa are significant phases in their reconnection journey, he says      it allows those who are initiated into the Centre “to evolve past the political approach and into the practical one.”
Kamenthu made a recent fact-finding visit to Montreal, together with another member of the Earth Centre, Nehez, who is affiliated to the Chicago branch, and Master Naba, from Burkina Faso, who is the son of the founding Dogon.
While here they met with several community organizations and laid the groundwork for establishing the institution in Montreal.
For Musafiri, it will be a milestone for those who are involved at all levels of social activism in the city and are looking for a philosophical framework such as it was for him when he began his search for spiritual enlightenment many years ago.
On the weekends of July 21-23 and July 28-29, The Earth Centre will conduct its  introductory lecture series and orientation in Montreal, themed Kemetic Culture & African Spirituality.
Discussions will feature topics ranging from Reincarnation to Kemetic Spiritualty and held at various locations across the city.
They include Reincarnation: Friday July 21 from 8:00pm to 9:00pm at the Two Brothers Barber Shop, 3174 Rue Legendre E.
Ancestral Spirit: Saturday July 22, from 5:00 pm to 7:00 pm at DESTA Black Youth Network, 1950 St. Antoine W., a discussion on Kemetic Spirituality.
Back at DESTA from 4:00 pm to 6:00 pm on Sunday July 23.
Dogon Knowledge: Friday, July 28, at Université de Montreal 6:00 pm to 9:00 pm.
M’Tam Orientation: Saturday, July 29, from 4:00 pm to 7:00 pm at DESTA.
Info. 514 965 1458 or theearthcentre.org