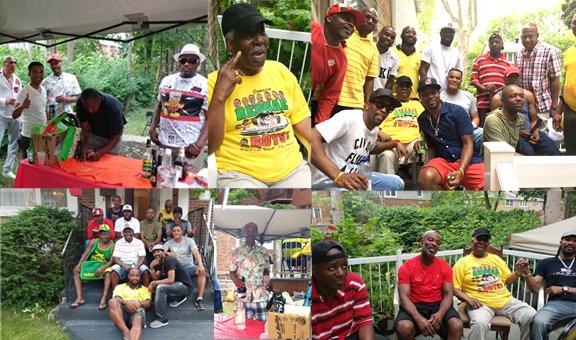 A group of former players of the West End Recreation Soccer League made their way to the home of Mr. Earl Gordon in NDG on June 30, to pay a special tribute to the man they call “Mr. G”, who was the driving force behind the league, and who played an instrumental role in their development as young adults.
The day was flavored by a tasty Caribbean BBQ together with appropriate choices of refreshments, lots of “old soccer talk”, and highlighted by the presentation of a plaque to the man who ran the league almost single-handedly for close to three decades.
The wording on the plaque conveyed the high esteem in which the guys held “Mr. G”:
You have been instrumental in their overall development, achievement and well being by facilitating a service through the vehicle of sports (soccer) to immigrants and Montrealers.
It was through this avenue, they found solace, comfort and camaraderie with their peers…
This was a lifeline to many troubled youth, who could have channeled their energies and vitality into (…) self-destructive endeavors. Had it not been for you there would have been many sad outcomes…
The tribute was the idea of Terryne Cleghorne, a former player with Bombers Soccer Club, and he was assisted by his former teammates and individual efforts from “Beenie” Greene, Gillian “Crash” Elias, Adlai Caesar and many others