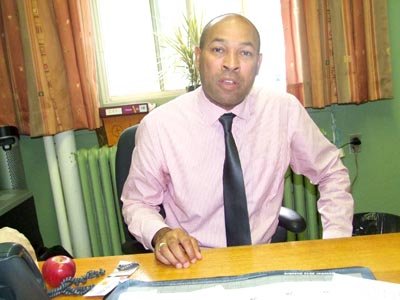 Attempting to describe the cultural make-up of his student population at Elizabeth Ballantyne Elementary School (EBS), Otis Delaney, the principal, says: “Think of the United Nations.”
“We’re proud of that diversity and we think that all the students benefit from it, because it’s reality… it’s the real world.”
Also, according to Delaney, within that mass of diversity are a world of social issues that accompany the students everyday they leave their home in neighborhoods such as Cote St. Luc, Montreal West and the Walkley Street area, all of which border the school.

That’s what makes the school special for him: the broad diversity of children, including a core of international students and staff that is committed to serving the multiplicity of cultures that make Elizabeth Ballantyne a true community school.
So part of his pleasure in coming to work every day is helping students, and sometimes their parents, work through whatever obstacles that may stand in the way of learning.
“ I believe in a holistic approach to education… I believe in developing the whole child,” he says. “And that is what we try to do at this school.”
“We make it our duty to look at whatever special challenges that our students might be facing, and try to meet those challenges.” He says with all the authority vested in him as principal. “So, if they are not getting enough love or being nurtured at home, they will receive love and nurturing here at school.”
In the seven months that he has been on the job as principal, he has seen enough to be able to tell parents far and wide about the crew of dedicated teachers and support staff on hand to prepare students for their educational journey.
That’s why he is able to boast about the school’s academic and extra curricular programs, which are helping many of his students snag much coveted places in prestigious high schools across Montreal.
As one of the handful of schools in the Montreal area that offers an English Core program, EBS equips its students with the strongest fundamentals in the English language to go with the 32 percent training in French as a second language that makes up the curriculum.
Delaney also boasts about the school’s academic enrichment program in English, Math, History, Geography and French that allow students to work in “a smaller, more challenging classroom environment on an average two times a week.”
Administrators and staff at EBS ensure that students benefit from new teaching tools and technology at their revamped computer lab that’s now equipped with dozens of desktops, Smartboards and wireless access.
But as it should be, good old-fashioned reading remains a vital part of the educational development; so all EBS students have two weekly visits to the Montreal West Children’s Library, conveniently housed in the school building.
Over the past several years, the school has also established itself as a dominating force in Robotics with an extensive program that involves about 50 students building and programming robots to compete against other schools in categories such as dance, search and rescue, soccer and Beatles competitions.
For three years in a row (2012, 2013, and 2014), the EBS teams won gold medal in the 2-on-2 Soccer Competition.
Delaney says just as students flourish in the fertile learning environment at EBS, he too finds growth in the school’s multicultural mix and dedicated staff.
Delaney, who was born in New Brunswick, took a roundabout route to Montreal. He studied Sociology at St. Francis Xavier University where he was a standout basketball player. Then he moved to the University of Windsor where he earned his teaching diploma.
He has been an educator in Montreal since 2002, when he landed his first job at Centennial High and moved soon thereafter to St. Thomas High. Two years later, he elevated to an administrative position when he was named Vice-principal and then principal at LaSalle Elementary School.
He assures parents that at EBS with its exemplary Core English and academic enrichment programs, their children’s well being, educational and otherwise, is of paramount interest to him and his staff.