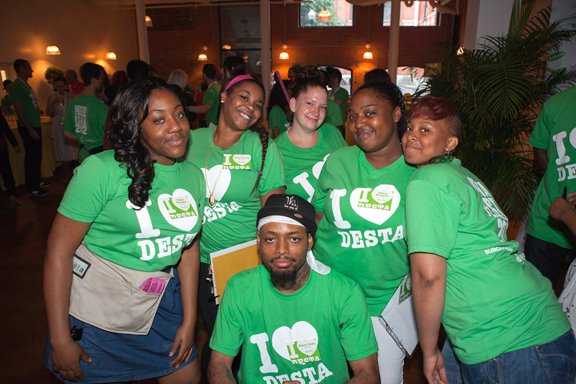 For much of the past year or two, DESTA Black Youth Network has been public in their struggle to keep their doors open as some of their funding sources dried up.
However, they have never wavered in their continuing efforts to raise the necessary funds to continue their work of serving marginalized youth across Montreal.
So in maintaining that zest, on Saturday, December 10, Desta is going all out to mobilize Montrealers to be part of a massive and innovative fundraising effort.
Their Stream-A- Thon is one of the first of its kind in the city, and it calls on supporters from near and far to log on to facebook destabyn and make a donation to the cause while enjoying performances from what is probably the largest gathering of local artists in recent times.
They will be streaming from 11 AM to 11 PM and the performances will be nonstop.
Executive director, Pharoah Hamid Freeman says the immediate goal is to raise about $10,000, but in the long-term DESTA wants to establish partnerships with like-minded individuals and organizations from across Canada and around the world in the effort to salvage the lives of the many who are existing on the margins of society.
“The funds will go directly to the services that we’re now offering to a growing number of these young people from across Montreal,” he says. “For example, our continuing education program is really important to get some of them back on track. We offer a free tutor and pay for 75% of their study material, now we’re seeing a lot of youth who need help with transportation and food.”
He also points to the recently initiated justice program that provides support to young people who are incarcerated.
“We try to establish a relationship with them while they’re inside and build on that relationship when they get out by helping them to get back to school, find employment, and at times advocate on their behalf with half-way houses.”
Pharaoh Freeman says a growing source of concern at DESTA is the increasing number of young people who are dealing with mental illness in our community.
“We have to try to help them and we’re looking at art-therapy as a way to do so. It’s very expensive, but from all accounts it can be effective.”
Pharaoh and his team at DESTA have put together an exciting day of on-line fund raising, including nonstop entertainment, a free flow of food and refreshments for volunteers, together with the recognition of two community stalwarts, including the DESTA Sounds of Life Community Impact Award to Malik Shaheed. And Sounds of Life Living Legend Award to Ethel Bruneau.
To nice up the day, there will also be a soca workout class, a silent auction, a monologue presented by Black Theater Workshop, and volunteers, staff and participants speaking on their experiences at DESTA.  The line-up of performers includes big names like M-City Solo, Charlie Biddles Jr. and Veronique, Mikey Dangerous, Sampaloo, Skipper Dean, West Can Folk Performing juniors and seniors, SerenI and Sam-I-Am, Strange Froots
Goofy JaVinchii , Jonathan J-Style Mukoma, Svens Telemaque, Starbuds, Nicole Marshall, Susan Chato,
C-Money Dg, Chanda T Holmes, Richeus, Gytana Theobrun, TShimba, Magda & Roots, Caribbean Voices
ACD Drummer, Mr Flip Star and Rayana Speede.
Deejays include: Dj Le Backspin, Dj Overdose, Dj Blaster and Dj Marvelous.
Masters Of Ceremony For The Day include Pat Dillon, Audley Coley, Bryan Smith, Malik Shaheed and Yvonne Jacobs.
Info: 514-651-4545