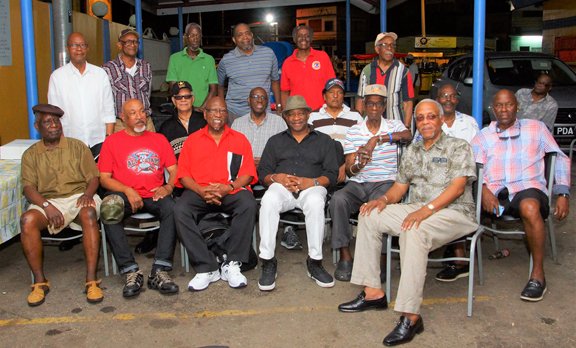 Trinidad All Stars’ Minuet In G at the 1958 Bomb competition

Martin Albino’s involvement in the steelpan movement reaches back to well over six and a half decades and still he continues to be relevant and make a difference.
This year, the Montreal-based composer, arranger and player extraordinaire celebrated a special milestone in his native Trinidad and Tobago by organizing the 60th Anniversary of Trinidad All Stars performance of Minuet In G for the inaugural Bomb Competition in the 1958 carnival.
Needless to say, the ‘tune’ arranged by the legendary Neville Jules, 30 years old at the time, totally captivated steelpan aficionados and J’Ouvert revelers and earned All Stars the coveted Bomb title.
Martin, who at the time was barely into his teens, remembered the many nights of practice for the 40 or so members holed up in what was then called “the garret” (attic) of a building in downtown Port of Spain practicing the Beethoven’s classic in total secrecy playing the instruments with their fingers.
Several of the players who were part of the band 60 years ago were on hand on February 5, for the celebration of that memorable moment in steelband history, hosted at All Stars pan theatre on Duke Street, Port of Spain.
Among the steelband bards on hand for the celebration were Ruthven Bailey, Andrew Laugunal, Roy Regis, Winston Gordon, Eddie Hart, Clyde Henry, Robert Taylor, Thomas Regis and St. Clair Plouden, “the Book man, who wrote down the names of late comers and transgressors.”