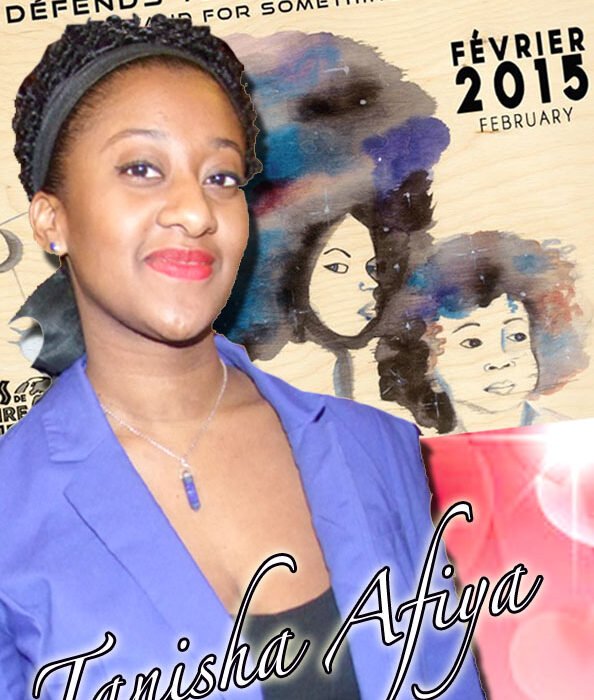 r Black History Month – Stand For Something – is one that resonates for artist Tanisha Afiya Mapp.
A woman whose finger painting days evolved into a lifelong passion for art in all its forms, Mapp’s creations fall into, and draw upon, a genre she calls Black art, which draws on our past, present and future to tell the stories of our people.
“It gives us a voice without actually speaking about sensitive subjects – racism, Ebola… art is this one outlet that you can create something and people can interpret it how they want,” she said.
Mapp’s painting, “Afro Stars”, was the winning entry in the official poster contest for the city’s Black History Month celebrations this year.
The painting shows a woman and a boy sporting Afros made of stars. The woman looks to the past while the boy gazes into the future.
“It is a painting meant to show the importance of knowing our history and of passing on those stories and lessons from generation to generation,” she said. It’s about knowing our past so we can work toward a better future, she explained, citing the popular Malcolm X adage: “A man who stands for nothing will fall for anything.”
Coming off a year when Ebola killed thousands of people in Africa and when justice eluded the family of Michael Brown, Mapp said she felt Black people needed to focus on positives, hence the stars, a symbol of brightness and hope.
“I always have something symbolic in the piece. There’s always a message in my work,” she explained.
Mapp, 30, has been painting her entire life, but it was at age 10 that she began to pursue it seriously, going on to study visual art at Dawson College.
But she considers herself adept in all forms of art – an ease she says, which comes in large part from weekends spent at NDG’s Black Community Centre years ago, where she and others would spend the day dancing, painting, acting, singing, writing, laughing and developing a passion for creativity.
A self-proclaimed “poor student” who eventually committed to applying herself in all subjects, not just the artsy ones, she had a teacher at Wagar High School who casually mentioned she should consider teaching.
She took that suggestion to heart. After graduating from Dawson, she completed a degree in art education at Concordia and now teaches art at Bancroft Elementary School.
As her interests lie with what can be referred to as the more traditional form of art, she knew it would be hard to make a living as an artist alone, so teaching helps her combine her passions for art, teaching and children.
She said she tries to find the time to paint and write and create when she’s not working, but that it is a challenge.
Mapp did find the time to contribute a painting and two sculptures to The Fourth Wall: Making the Invisible Visible, an exhibit that opened last year at the Montreal Museum of Fine Arts that featured a host of Montreal’s Black artists and attracted hundreds of visitors, she said.
Her next exhibition is Saturday, Feb. 7, and will feature portraits painted in red, black and green in the tradition of the Pan-African flag, as conceived by Jamaican activist/journalist Marcus Garvey.
Despite her love for all art forms, visual art forms are Mapp’s first and greatest love. The way paintings, for example, can ignite discussion and evoke feelings in people is unique, she said.
“With art, it becomes history. As long as it doesn’t get damaged, it’s always there. And I find there’s something special about it,” she said.