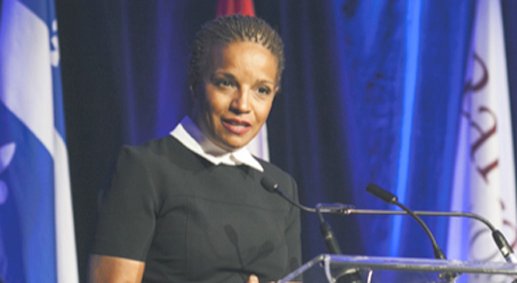 On Tuesday, February 7, Tamara Thermitus was named head of the Quebec Human Rights and Youth Rights Commission, becoming the first person of African descent to hold the position.
Her appointment came after weeks of wrangling by politicians at the National Assembly, with opposition politicians led by Parti Quebecois’ Jean-Francois Lisée claiming that she was “too multicultural” for the position, while others accused her of being too close to Dominique Anglade who is the minister of Economy, Science and Innovation. Both women were born in Haiti.
After many in the public voiced their concerns, her recent nomination received unanimous consent at the National Assembly.
Thermitus, a civil litigation lawyer carved out a brilliant career on her way to becoming only the second woman to hold the mantle of leadership at the commission.
The 51 year-old moved to Sept Iles from Haiti in 1967 with her parents where her eyes were opened to the injustices of race and was reportedly highly consumed by the plight of the First Nations community in the area.
At CÉGEP de Sept-Îles, she began putting in place the fundamentals of what is evolving into a spectacular career as a jurist.
The McGill University graduate served as director of Policy and Strategic Planning for the Office of Indian Residential Schools Resolution Canada at the Ministry of Justice.
As one of the lead negotiator in the process, she helped define the mandate of the Truth and Reconciliation Commission of Canada and was key to the historic settlement that ensued.
In 2011, she became the first Black woman and the first Ministry of Justice Canada lawyer to receive a Prix Mérite from the Quebec Bar.
Her life of activism reaches far back into her career when she took a vocal stand against racism in the legal profession.