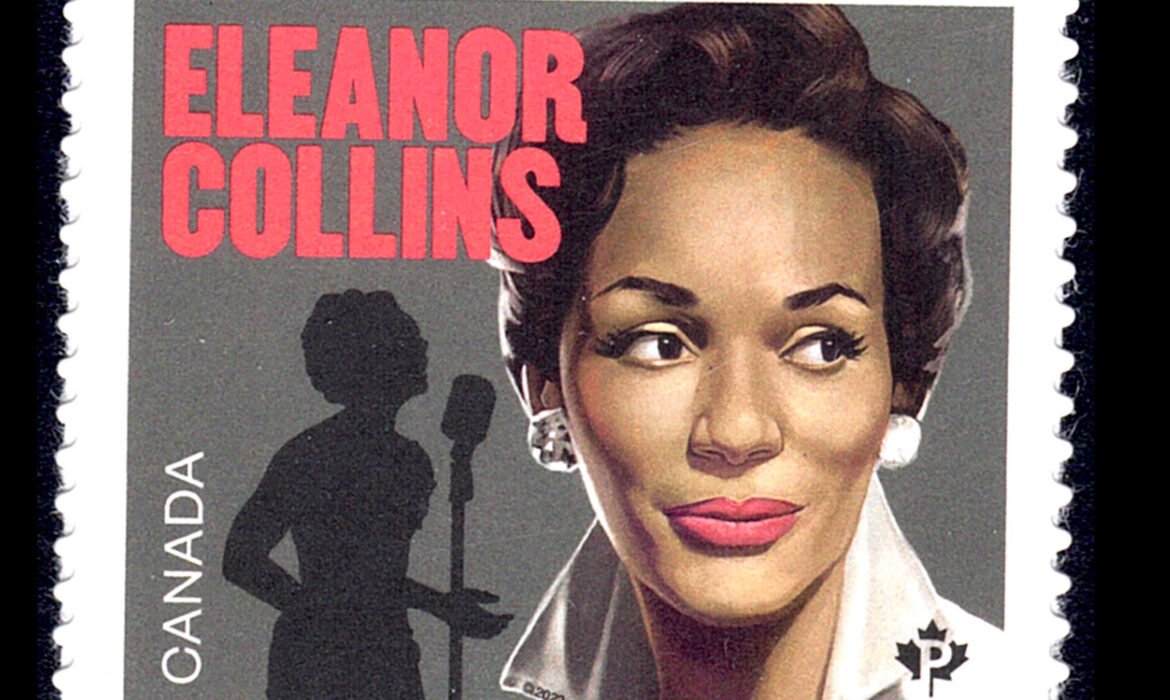 Trailblazing jazz singer and TV icon, Eleanor Collins is being honored with a stamp by Canada Post.
The stamp depicting the “Canadian First Lady of Jazz” was unveiled at a virtual ceremony on January 21 that paid tribute to Collins’ life and legacy ahead of Black History Month.
Nalda Callender of the National Congress of Black Women Foundation, filmmaker Sylvia Hamilton and musicians who performed with Collins throughout her career, including Sharman King and Marcus Mosely were part of the virtual unveiling of the stamp.
In a tribute to the singer, Callender paid homage: “you never cease to amaze us with your quality and success. You are such an inspiration. You have worked hard for this moment and we couldn’t be more proud of you.”
Hamilton added to the tributes she puts Collins in the same league as jazz greats Ella Fitzgerald, Billie Holiday and Lena Horne.
“It has been a great honour in my life to have known you, shared the stage with you and to have had the opportunity to learn from one of the best,” Mosely said of Collins.
Born in 1919 in Edmonton, Alberta, Collins moved to Vancouver in the late 1930s, where she found a thriving jazz scene which she quickly became a part of.
Her first notable appearance was in the early 1940’s on CBC Radio with the gospel group Swing Low Quartet. After this she began performing with Ray Norris for the jazz series Serenade in Rhythm.
In the early 1950s, she started singing with other top musicians of the day and went on to perform at the Jazz City International Jazz Festival in Edmonton in the 1980s and on Jazz Canada with the Tommy Banks orchestra and the Jazzland radio program.
She has also performed with greats such as Oscar Peterson and Dizzy Gillespie.
Collins made her television debut in a CBC variety series out of Vancouver called Bamboula: A Day in the West Indies, which aired in 1954.
CBC then showcased Collins’ elegance in The Eleanor Show in 1955, making her Canada’s first female jazz artist to host a national television series. Collins hosted another show, Eleanor, in 1964.
Always a paragon of class and virtue Collins is said to have confronted racial prejudice “by cultivating the principles of equality and acceptance through her professional and volunteer work.”
In the decades following the 1950s, Collins continued to appear on numerous television and radio shows until her last concert in Vancouver when she was in her mid-90s.
The centenarian is humbled and grateful for the acknowledgement and honor. “I am grateful to be alive in this new age, for the quality of life I have somehow been able to maintain, for the lovely acknowledgements of my life and work, and for everyone who has been part of my journey it has been a real blessing,” she is quoted as saying.

“To really have someone affirm your work and life, on a postage stamp? That is something. There’s only one word for that — that is surreal.”

Collins who remained married to Richard Collins for 70 years and raised four children, received the Black Canadian Awards Lifetime Achievement Award and was honored with an Order of Canada on her 95th birthday, November 21, 2014
The new stamp features a stunning illustration of Collins in the foreground along with a silhouette of her performing in the background.