Advertise with Us
Home News Community News Call Her Crusader 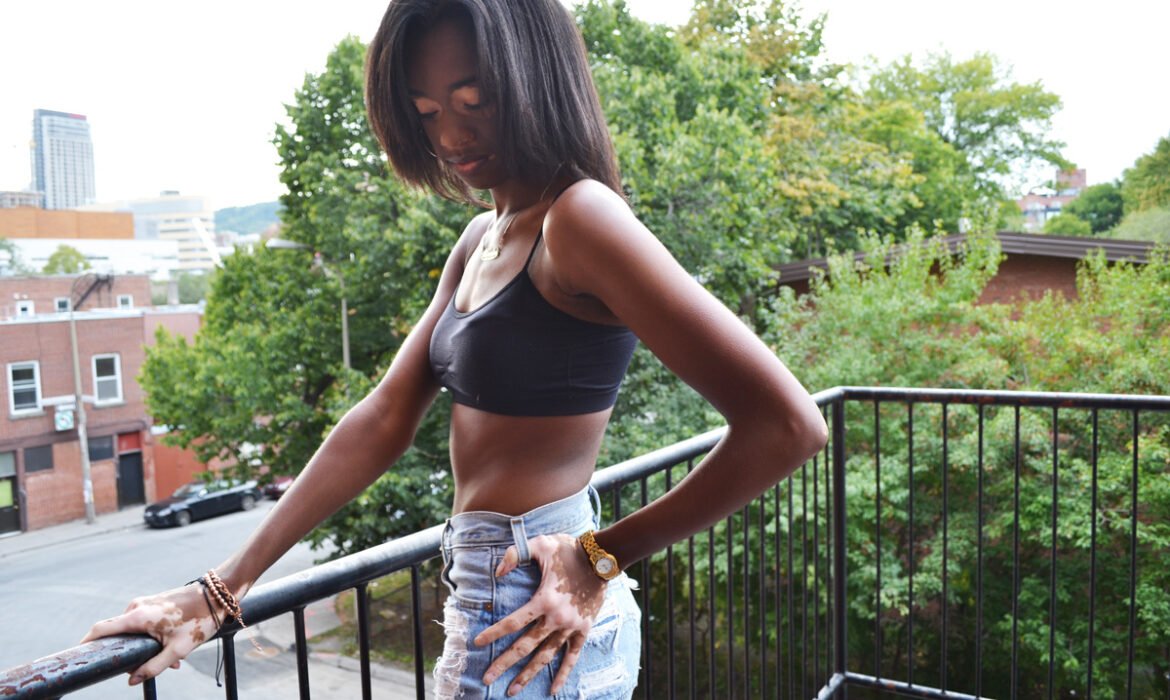 Aiesha speaks out to raise consciousness and awareness on Vitiligo

Aiesha Robinson was taken aback when she was approached (almost confronted) by a man in a mall in the West Island. She didn’t feel much like speaking to him, but when he made reference to her skin condition and confessed that he too was dealing with the disorder, she had to hear him out.
It turned out that the man, who had his two children with him, used to be happily married; he sponsored his wife to Canada from a country in Africa. Things were going well until the little white spots on his body turned to white blotches and white patches, that’s when his wife decided that she couldn’t deal with the disfigurement and left. He contemplated killing himself.
After hearing the story, Aiesha went to her car and cried.
They are both dealing with vitiligo (say: vi-til-eye-go) a disorder caused by the absence of melanin in certain areas of the skin, which leads to irregular shaped white spots on different areas of the body. It can be acquired at any age.
Aisha says she first heard about the affliction because of Michael Jackson, who famously brought it into international prominence and also had a grandfather with it.
She noticed her first itsy-bitsy-tiny spot on her right thumb around six years ago  when she was 18, but didn’t give it much thought and waited for it to fade away.
“When it didn’t go away, I showed it to my friend who herself was dealing with vitiligo and she told me that I need to go see the doctor immediately, but at that point in my life I just wasn’t prepared to deal with it, so I didn’t go right away.”
At the time, the young West Island resident was immersed in basketball, which she has been playing since she was eight. Along the way, she left a trail of excellence with Lindsay Place High, Brookwood Intercity team, Sun Youth and eventually with Dawson College.
Within a year the spot on her thumb multiplied to eight, triggering a bit of a panic, and causing Aiesha to find creative ways to cover up and hide the spots, which she did until about two years ago, when she knew she had to face reality.
“At that point I decided that I wasn’t going to let it take over my life,” she told the CONTACT in a recent telephone interview. “Because I was dealing with it mostly by myself, I started to confide in family and friends and stopped covering up.”
It also meant that she had to face the public and deal with expressions of ignorance and prejudice because of her appearance.
“Some would stare, others would have funny looks on their faces, especially in social settings such as night clubs and parties, all of which made me feel very bad… I cried a lot.”
Aiesha says there were also times when because of her appearance, she
faced discrimination trying to find jobs and wondered if she would ever find a man to see beyond her disorder, so  she can  start a family.
It was difficult finding her way out of  her on-going depression.
What helped was the support of her parents, her brothers, her cousins, other relatives and her legion of friends. She says a big part of it came from one of her brothers who fueled her with techniques of self-empowerment and positive thinking. And it all charted a new course for her.
Today she doesn’t cry anymore, instead she devotes herself fulltime spreading awareness of vetiligo and helping others who’re marginalized due to circumstances beyond their control.
She started with a 19 minutes documentary titled Living With Vitiligo, which was released in  and so far has received  about 1,000 hits on YouTube. And most recently she has hit the trail as a motivational speaker; demystifying the disease and helping people get beyond their discomfort when dealing with those who are afflicted.
Her first speaking engagement was at La Prairie Elementary School in front of some Grade 5 and 6 students.
It was an awesome experience, which convinced me that this is what I wanted to do… speak to people, spread awareness, and help others.
Her next appearance at the LaSalle Boys and Girls Club was also very edifying.
Aiesha is also using her recently established not-for-profit organization, Born to Rise, as a forum to educate and work on behalf of marginalized youth.
She says her struggle with vitiligo has made her realize that many other young people are dealing with their own issues… so she wants to use the experience she has acquired to help .
On April  25, Aiesha launches Born to Rise with an evening of inspiration,  featuring  a line-up of  motivational speakers and performers at Westmount High School inviting all  Montrealers, especially youth in search of  empowerment.
Behind every person lies a story. Information  514 978 9228 or 438 886 9228