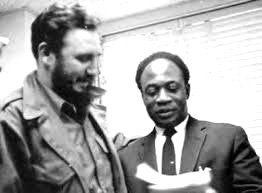 There is often talk of human rights, but it is also necessary to talk of the rights of humanity. Why should some people walk barefoot, so that others can travel in luxurious cars? Why should some live for thirty-five years, so that others can live for seventy years? Why should some be miserably poor, so that others can be hugely rich? I speak on behalf of the children in the world who do not have a piece of bread. I speak on the behalf of the sick who have no medicine, of those whose rights to life and human dignity have been denied.— Fidel Castro’s message to the UN General Assembly, 1979
The legacy of Fidel Castro was built not only on his words but also on his efforts to change the conditions of those in his country and around the world that have been robbed of their dignity.
To many, he remains the greatest revolutionary in contemporary times.
To Afro-Cubans and those who are mixed-race, who have been mired in decades of poverty and the object of state cruelty and murder in the pre-revolution period, Castro and the revolution provided a path to dignity and heralded what was to be a new beginning in the country.
Like Blacks in North America and the rest of the Caribbean, Afro-Cubans were hobbled by the legacy of slavery and a history of extreme oppression as they tried to take their place in the Cuban society that emerged after the country earned its independence from Spain and shook off two periods of occupation by the U.S.
Although they had fought gallantly in the wars of liberation in the late 1890s, Afro-Cubans soon found themselves unable to enjoy the fruits of their efforts as they continued to languish among the unemployed and disenfranchised.
By 1912, their attempt to organize themselves politically sparked a race war that saw tens of thousands of Blacks massacred across the country, to “near genocidal proportions” as described by one writer.
And in the years leading up to Castro’s revolution, Blacks were systemically degraded to second-class status in Cuba, having access to only the most menial jobs and education while unable to go to certain beaches, parks and other public spaces.
Their plight was not lost on Castro who saw the abject discrimination they faced, first in his formative years on his father’s extensive plantation where many were employed, and around Santiago de Cuba where the bulk of the Black population reside.
Two months after marching into Havana, he targeted the scourge of racism as a priority in the shaping of the new Cuba with one of the most famous quotes on the issue:
“One of the battles we must prioritize more and more everyday . . . is the battle to end racial discrimination at the workplace. There are two types of racial discrimination: One is the discrimination in recreation centers and cultural centers; the other, which is the worst and the first one we must fight, is racial discrimination in jobs.”
And he moved swiftly to dislodge some of the foundations upon which the racial disparities were built.
He enacted a massive literacy program that enabled almost every Cuban to learn to read and write.
And he passed legislations such as the Agrarian Reform and Urban Reform Laws, which provided farmlands to families in rural areas and set them on a path to self-sufficiency, while at the same time significantly lowering rents in cities to facilitate the mobility of Blacks
Among some of the earliest laws enacted in the new Cuba were directives that outlawed discrimination and prejudice in jobs, housing, education and health care.
As a result, many young Blacks were able to elevate themselves to respectable levels in society as doctors, lawyers and other professions.
But as it is for Blacks elsewhere, the road to equity for Afro-Cubans is long and winding.
So today, 57 years after the revolution, their economic and social conditions still lag significantly behind whites. And stratification in Cuban society is still as pronounced as ever with Blacks systematically under-represented in politics, business and media, and even in frontline jobs in the lucrative service industry.
But it has to be said that Castro’s Cuba has gone further than any other nation in attempting to close gaps between Black and white by removing barriers to education and passing laws to upend discrimination in the Cuba’s workforce.
Many observers of Cuban politics have noted that the decline of the Soviet Union ushered in a new era of racial inequity. By losing its main trading partner and global supporter the country was forced to adjust its monetary policy as it became more dependent on tourism.
It introduced the Cuban convertible pesos (CUC) as another of its official currency together with the Cuban pesos, and as the currency of choice in the country’s tourism and service sector.
However, because the CUC or chavito was valued at more than 25 times the pesos, the mostly white workers of those sectors were able to collect in one day what a doctor or schoolteacher made in a month.
Racial equity in Castro’s Cuba took another hit as outside remittances became a vital part of the country’s economy because the bulk of the money coming in went straight to the hands of   mostly white families from ex-pats in the U.S.
There’s a reason why Afro-Cubans initially were and still are big supporters of the revolution, and much of it had to with the awareness that racism is difficult to dislodge in any society, but el
Commandante Fidel Castro did more than anyone to take a stand against it in Cuba.