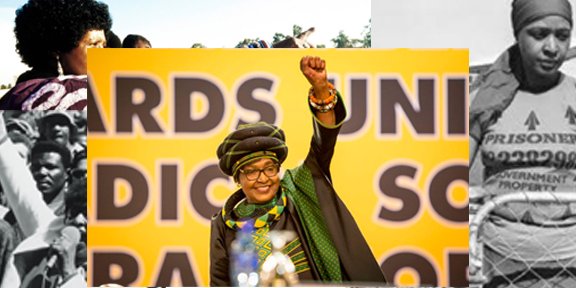 An inconceivable void grips the nation of South Africa and the world following the passing of the mother of the nation, the radical anti- apartheid stalwart, Winnie Madikizela-Mandela. She died on April 2 at age 81.

Winnie, whose Xhosa name was Nomzamo (“She who tries”), was born to a Xhosa family in Bizana. She was the fourth of eight children – seven sisters and a brother.

Her parents, Columbus and Gertrude, were both teachers. Her mother died when she was 9-years-old, resulting in the break-up of her family, and the siblings sent to live with different relatives.

On leaving school, Winnie went to Johannesburg to study social work at the Jan Hofmeyr School, despite restrictions on the education of Blacks during the apartheid era. She earned a degree in social work in 1956.

After her studies, she became the second wife of South African anti-apartheid leader Nelson Mandela; they had two children, Zeneni and Zindziwa Mandela. She was a loving mother at home and became an historic anti-apartheid activist in her own right.

After her husband was jailed—for almost three decades—Winnie was called “mother of the nation” and soon became a symbol and stalwart of the struggle against the [segregationist] system. She was imprisoned for 17 months, most of them in solitary confinement, an experience that she later said, changed her profoundly.

After her release from prison, her home became a meeting place for diplomats, fellow activists, and international journalists.

She was renowned for her war cry and mantra in the streets, “Amandla!” (Power in Xhosa).

Mandela met the brutality of racial segregation with fire; she was constantly arrested and assaulted by the police. But she remained unshaken, consumed by the need for Black liberation, regularly taking to the streets and continuously agitating against the sadistic regulations of the apartheid system.

After Nelson Mandela’s release from prison in 1990, they were unable to rekindle the flame that once burned between them and they divorced shortly after, he citing that she was not the woman he married 37 years ago. But she did not cower (from the public eye), remaining devoted and resolute in her life of politics and struggle. In December 1993 and April 1997, Winnie was elected president of the ANC Women’s League where she served, but was forced to step down in 2007 due to legal trouble, but she continued to be an outstanding figure for racial and gender equality.

On Good Friday, Ms. Mandela went to church, but reportedly complained of flu-like symptoms over the weekend and was admitted to hospital.

“She died after a long illness, for which she had been in and out of hospital since the beginning of the year,” family spokesman Victor Dlamini said in a statement.

He added, “She succumbed peacefully in the early hours of Monday afternoon surrounded by her family and loved ones.”

She will be remembered for her struggle to liberate her people from the scourge against racial oppression.