A decade of helping student-athletes 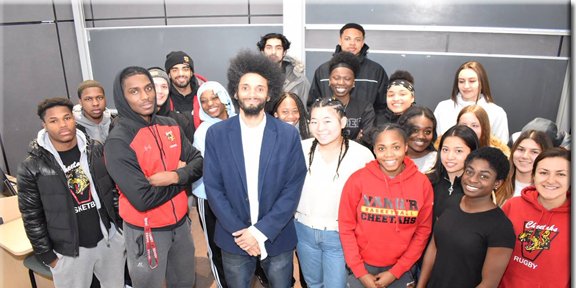 Eva R Gsum Foundation: More than 150 have been led closer to their dream

Having spent much of his early life on the basketball court, playing at all levels from high school to university, Garvin Musgrave knows the benefits of what can be learned playing sports.
“Those leadership skills that I acquired back then are still useful to me today in my job and in other areas of my life. And it’s the same for those young men and women that we’ve been trying to help,” he told the CONTACT recently.
March 26 marks 10 years since Musgrave and his team at the Eva R Gsum Foundation have been helping young student athletes go towards their dreams.
“More than 150 student-athletes in need received support to persevere in their education and continue to play the sport they love,” he states.
To that end the foundation has given out more than $100,000 in assistance over the past decade.
Every year, they offer six scholarships to students at three Anglophone colleges – Vanier, Dawson and Champlain – upon the recommendations of coaches, athletics’ departments or community groups.
Musgrave, who is the founder and serves as the executive director, says to make it happen, they depend on a solid network of contributors that have been supporting the foundation over the years.
“And because we function without paid staff or expenses, we’re able to donate 100% of what we receive, which makes us stand out from other charities.”
In carrying out their good deeds, the foundation comes into contact with many ‘at-risk’ youth and those facing dire circumstances in their lives.
“In the last year or so, we’ve helped a student returning to school after the loss of both parents, a student forced out of their home just before the holidays, and a young student-athlete-parent making all three work.”
The foundation also reaches out to young men and women at local tournaments and summer camps, as well as donating books and other back-to-school supplies to students in need.
Looking back over the past ten years, Musgrave, a Concordia University graduate, says he founded the Eva-R-Gsum Foundation because he saw how important it was to student-athletes who were struggling financially.
He co-opted four schoolmates, two from high school and two from university to serve on the board of directors and they immediately began impacting on the lives of young people.
As athletic director at John F. Kennedy High School for the past 15 years, Musgrave has had a front seat view on the lives of many young men and women.
He says not much has changed in the lives of student-athletes over the decade because the needs are still as pronounced as ever.
“What I’m seeing today are young people who are creative and blessed with limitless potential and resources at their disposal,” he says. “But many are lost and can’t see a clear path forward because they lack motivation.”
Looking forward, Musgrave and his board are positioning Eva-R Gsum to team up with another schoolmate who is part of a deejay, sound system, Digital Movements, and planning a series of community events such as Colorwave Painting Classes, SocaRolla Rollerskating, SocaStrike Bowling and Glace Ice Skating.
In celebrating the 10th anniversary of the foundation, Musgrave and his team are hosting a free High School Basketball Coaches Clinic on March 29 and a massive SocaStrike event on March 30 at the Pont Mercier Bowling Alley in LaSalle.
Support Eva R Gsum FOUNDATION at 7056 Marie Rollet
LaSalle, Quebec H8N 3E7 (514) 368-1199 email: ergfoundation@live.ca