As anti-vaxers, anti-maskers flood campaign for their freedoms to be maintained. Four other candidates are traversing the country campaigning. For three of them, their hope is that they will be the next Canadian prime minister and for one, Justin Trudeau he hopes to come out of it with a majority government.
Here’s a look at the four…. 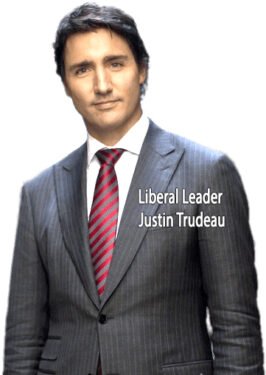 Justin Trudeau was born on December 25, 1971, in Ottawa, Canada. He was immersed in Canadian politics from the start. He is the oldest son of former Prime Minister Pierre Trudeau and his wife Margaret and spent his early years at 24 Sussex Drive, the prime minister’s residence in Ottawa. In an interesting incidence of foreboding, American President In fact, only months after his birth, American president Richard Nixon predicted his political future during a Canadian state dinner with Trudeau’s father. Nixon said, according to BBC news, “I’d like to toast to the future prime minister of Canada: To Justin Pierre Trudeau.”

After working across Canada he joined politics in 2006 chairing the Liberal Party’s task force on youth renewal. The following year, Trudeau began his campaign for a Parliament seat representing Montreal’s Papineau riding (district), winning the post in 2008.

He became the Liberal Party’s leader in 2013 and during the election season in 2015 he sought the Prime Minister’s seat. His election promises included “real change” in his campaign, calling for tax increases for the wealthy and tax cuts for the middle class. He also pledged to protect abortion rights and push through the legalization of marijuana in Canada.

Erin O’Toole leader of the Conservatives 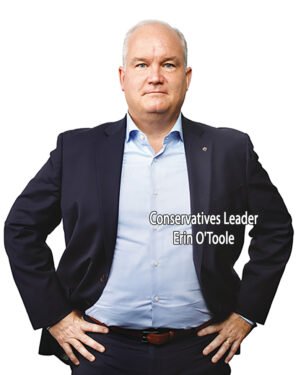 Conservative leader, Erin O’Toole has the unique privilege of being one of the candidates who has lived in four of Canada’s 10 provinces. He was born in Montreal to Mollie and John O’Toole who served as the member of Provincial Parliament (MPP) for Durham from 1995-2014. He moved from Montreal at the age of one, and grew up in Port Perry and Bowmanville. O’Toole joined the Canadian Forces in 1991 and studied at the Royal Military College (RMC) until 1995. He was commissioned in Air Command serving as an air navigator, eventually attaining the rank of captain. Following his active service, he received a law degree, practicing law for nearly a decade.

He joined politics in 2012 and became the Member of Parliament for the Ontario riding of Durham. He briefly served as Minister of Veterans Affairs in 2015 in the Harper government. In 2017, he ran for the party’s leadership, finishing third to winner Andrew Scheer. After Scheer’s resignation. O’toole became the leader of Conservative Party of Canada in August 2020.

O’Toole has marketed his party to working-class Canadians. O’Toole has been described as a moderate member of his party. On domestic policy issues, O’Toole supports gradually eliminating the federal deficit, defunding the Canadian Broadcasting Corporation’s (CBC) TV and digital English-language operations, simplifying federal taxes, allowing provinces to not have a carbon tax, and pipeline construction. On foreign policy issues, O’Toole supports a CANZUK agreement. This is  Canada, Australia, New Zealand and the United Kingdom as part of an international organization similar to the former European Economic Community. This includes increased trade, foreign policy co-operation, military co-operation and mobility of citizens between the four states, tied together by speaking English. On the international stage. O’Toole’s voting record on social issues has been characterized as socially progressive, though he voted against euthanasia legalization.

He recently doubled down on a campaign promise to eliminate a ban on some assault weapons, which is a sensitive issue in Canada after several mass shootings in the last 15 years. 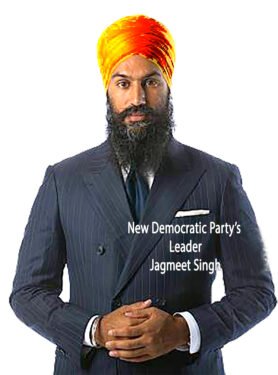 TORONTO, ON – AUGUST 11: Jagmeet Singh, Deputy Leader for the Ontario NDP. Aparita Bhandari is bringing 5 fashionable Indian men to the Star for a photo shoot in the studio of them together, and individually. (Chris So/Toronto Star via Getty Images)

Annamie Paul of the Greens 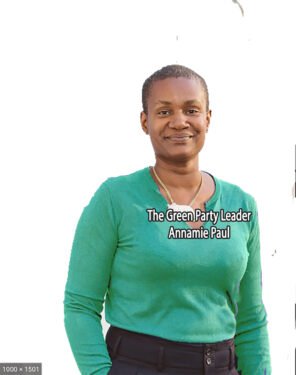 The Green party is under the leadership of Annamie Paul. She is the first Black – Jewish person to be elected leader of a federal party in Canada. She was born in on 3 November 1972. She attended high school at Toronto’s Runnymede Collegiate Institute and holds a Bachelor of Laws degree from the University of Ottawa and a Master of Public Affairs degree from Princeton University. She was called to the bar in Ontario in 1998.