The sad state of Puerto Rico after Maria 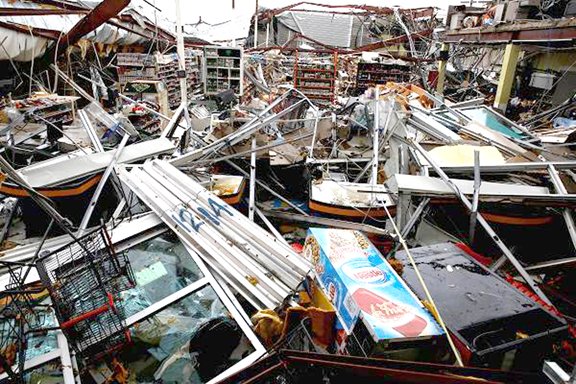 Weeks after the hurricane no food, no water, no electricity, no medication, lots of BS from the president

Two weeks after Hurricane Maria ravaged Puerto Rico, the island remains in a bad state.
Thirty-four people confirmed dead as a direct or indirect result of the category 4 Hurricane that struck on September 20. And experts agree that after clearing up the rubble and taking stock,   the number of dead will rise considerably, maybe into the hundreds.
More than half of the population of 3.6 million remain without safe drinking water and 95% are without electricity, including almost all of the country’s 70 hospitals.
On the ground, store shelves are empty, as are gas stations across the country; families are going hungry, many haven’t eaten in days, those in need of medication are out of luck.  Things are bad.
To make them worse, the country, an unincorporated territory  of the United States of America, had to deal with a visit by its president, one Donald J. Trump, who showed up with his wife and their entourage on Tuesday, October 3.
After he spent a little time walking around some of the safe zones around the country and a 17-minute meeting with some the so-called first responders, it determined that, like Puerto Rico, Trump has a problem.
Carmen Yulín Cruz is the mayor of San Juan, the capital of Puerto Rico, she has been hinting at his dysfunctionality as president for several days.
She met Trump at a briefing with a few other Puerto Rican leaders.
“This was a PR, 17-minute meeting. There was no exchange with anybody, with none of the mayors,” the mayor told MSNBC after the meeting. “And in fact, this terrible and abominable view of him throwing rolls of paper towels and throwing provisions at people, it really — it does not embody the spirit of the American nation, you know?”
According to a CNN reporter who was on the scene at one of Trump’s stops on the island. The scene was beyond shameful:
Trump, along with the first lady and the governor, shook hands with the crowd. Trump, still wearing a windbreaker, picked up a can of tinned chicken breast and held it up for the crowd to see.
He handed a pack of batteries to a man, as many in the crowd held up their cell phones.
Trump held up a flashlight and showed it to the crowd, while shaking hands.
The first lady followed close behind.
Trump kept picking up items from tables laden with supplies, showing them to the crowd and handing them to people with outstretched hands.
“There’s a lot of love in this room,” the President said. “Great people.”
To say that the president doesn’t get it might be one of the biggest understatements in the reign of this troubled man.
As a matter of fact, Trump and his team never really took the time to appreciate the scope of the disaster that ravaged the Caribbean island, so much so that a few days before his visit, his acting Homeland Security Secretary, Elaine Duke, referred to the recovery efforts there as a “good news story.”
Mayor Cruz almost went crazy with that statement.
Then the first thing out of the mouth of the president as he landed on the island were references to the number of people who were killed, suggesting that it wasn’t as bad as Hurricane Katrina. Here’s the quote attributed to him on that:
“Every death is a horror, but if you look at a real catastrophe like Katrina, and you look at the tremendous — hundreds and hundreds and hundreds of people that died, and you look at what happened here, with really a storm that was just totally overpowering, nobody’s ever seen anything like this. What is your death count as of this moment? 17? 16 people certified, 16 people versus in the thousands. You can be very proud of all of your people and all of our people working together. Sixteen versus literally thousands of people. You can be very proud. Everybody around this table and everybody watching can really be very proud of what’s taken place in Puerto Rico.”
After that, it was all downhill.
A guy who doesn’t know how to smile properly should not attempt to crack jokes, especially when the subject of jokes is surrounded by dire circumstances. Trump did anyway.
“You’ve thrown our budget a little out of whack. We’ve spent a lot of money on Puerto Rico,” referring to the country’s failing economy and what has to be spent on recovery.
Then he summed up as only Donald Trump can: “It’s a great trip. Your weather is second to none but every once in a while you get hit. And you really got hit.”
Retired Lt. Gen. Russell Honoré, who commanded the military response to Hurricane Katrina in New Orleans, has the final word on Trump’s response to hurricane-ravaged Puerto Rico:
“The president has shown again, you don’t give a damn about poor people, you don’t give a damn about people of color and the SOB that rides around in Air Force One is denying services needed by the people of Puerto Rico.”