The Fitz-Patrick Sisters In Concert 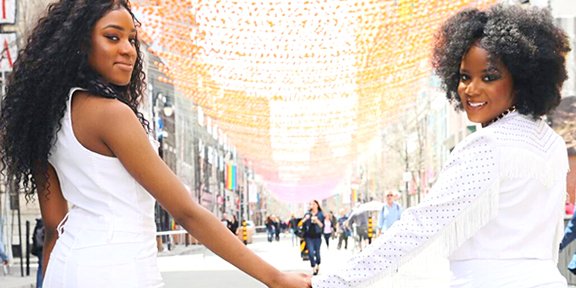 Montreal’s ones-to-watch-for, The Fitz-Patrick Sisters, are set to host their first, full-length, live concert performance on Saturday, October 20, in downtown Montreal at the Evangel Pentecostal Church located at 1235 Rue Lambert Closse, (near the old Forum), commencing at 7 PM.
The highly anticipated concert is a musical celebration, capping off a successful artistic year marked by a busy calendar and coveted appearances.
The Fitz-Patrick Sisters are described as ‘next generation’, millennial ‘movers & shakers’. Fans playfully describe the dynamic duo as the city’s very own version of ‘Mary Mary’ that’s marked by scintillating stage presence, captivating performances and top-tier vocal talent. The sisters’ sheer allure is undeniable, both on social media and Montreal’s music scene.
Over the past 2 years, these show-stopping, talented sisters (Ariel, 22 and Elasah, 23), have garnered enormous attention, opening for Jamaica legend Papa San (Kingston), New York Haitian-sensation Jackson Chery and Bridging The Gap (NYC), and Grammy-award winner Tasha Cobbs (ATL). The Fitz-Patrick Sisters have also performed for Canada Day Celebrations in Toronto, ON and Jamaica Day/Carifiesta (Week-ends du Monde) celebrations at Parc Jean Drapeau in Montreal and many other venues always wowing audiences.
The Fitz-Patrick Sisters growing popularity as artists continues to trend in the right direction, crossing over into social media. They were recently invited by representatives of Social Media to attend the YouTube pop-up space workshop in Montreal as one of the city’s most popular YouTube Channels. To close out 2017, they posted an acoustic Inspirational Medley video on Facebook that had over 40,000 views in 7 days. They were also featured as the sole Montreal artists at The Glass Awards in Toronto, which will be broadcast on Yes TV and Global TV.
The ‘praise party’ will also feature Montreal’s international recording artist, Jean Jean, and the exciting youth ensemble known as New I.D. Ministry from Ottawa and Montreal. The night promises to include several big surprises, including guest appearances, a grand prize giveaway and much more.
For information and tickets, text or call 514-775-5167, or log on to www.fitzpatricksisters.com.