Spotlight of academia on three of our luminaries 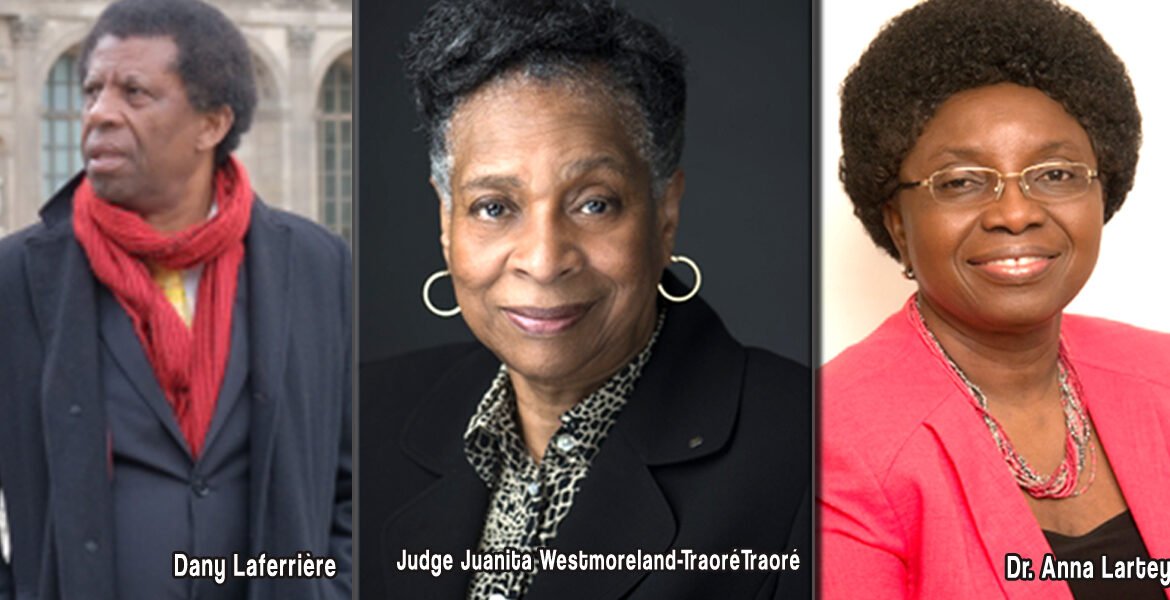 Three high-achieving individuals in our community, retired jurist, Judge Juanita Westmoreland-Traoré, renowned author Dany Laferrière, and Dr. Anna Lartey, an internationally recognized expert on global nutrition, were among a group of 14 luminaries chosen to receive honorary doctorates from McGill University for 2018.
The three have excelled in their respective fields and through their contributions and achievements they have impacted the lives of many in Canada and around the world.
In describing the 14 exceptional individuals who are the recipients of the university’s highest honors, Professor Suzanne Fortier, Principal and Vice-Chancellor, was quoted as saying: “This year’s honorary doctorate recipients include people who have broken important ground here in Quebec and around the world, and have improved the lives and well-being for populations around the globe. I think their stories will be a source of inspiration, both for the McGill community at large, and the Class of 2018 as they embark on their own exciting journeys.”
With her appointment in 1999,  Judge Westmoreland-Traoré  holds the distinction of being the first African Canadian to sit on the bench in Quebec.
In her more than four decades as a jurist, university professor and public servant, she carved a stellar career path that was defined by her commitment to human rights and equity.
And her exceptional talent and academic acheivements helped position her to be a vanguard for change in politics and in the workplace  including becoming the first African-Canadian Dean of a Law School in Canada with her appointment as Dean of the University of Windsor’s Faculty of Law in 1996.
She also served as the first Employment Equity Commissioner of Ontario when she was appointed by then NDP Premier Bob Rae in 1996.
While here in Quebec, her path to the bench included her tenure as a professor at the Université de Montréal and as one of the first faculty members in the Département des sciences juridiques of the Université du Québec à Montréal.
She also served as a board member of the Office de protection des consommateurs du Québec, as a Canadian Human Rights Commissioner, and as the first Chair of Quebec’s Conseil des communautés culturelles et de l’immigration.
Westmoreland-Traoré retired from the Court of Quebec in 2012, but sat as a supplementary judge until 2017.
Born in Montreal, Westmoreland-Traoré has been a lifelong member of Union United Church and the Congress of Black Women of Canada, and also served on the boards of Centraide of Montréal, the Women’s Legal Action and Defense Fund and La ligue des droits.
An officer of the Ordre national du Québec, her achievements and contributions have been recognized far and wide, including in 2008 when she was awarded the Rights and Freedoms Prize from the Commission des droits de la personne et des droits de la jeunesse on the occasion of the 60th Anniversary of the Universal Declaration of Human Rights.
She also received the Luminary Award from the University of the West Indies and the Viola Desmond Award from Ryerson University.
On Thursday, May 31, she was conferred with the Doctor of Laws, honoris causa, at the university’s graduation ceremony in downtown Montreal.
Dany Laferrière
Today, Dany Laferrière stands as one of the most respected scribes of the French language.
His books, all 30 of them written in French, have been translated into 15 languages, including English, Chinese, Japanese, Korean, German and Polish, and have earned him international acclaim.
But above all, the Haitian-born author and academic has attained the distinguished standing of being an officer in the Académie française to which he was elected in December 2013, becoming the first Haitian, the first Canadian, and the first Quebecer to receive the honor.
He is only the second Black person to hold a seat in the hallowed institution that is the keeper of the French language, after the iconic Senegalese writer Léopold Senghor.
A journalist in his native Haiti, he moved to Montreal in 1976 and catapulted to international fame with the release of his first novel, “Comment faire l’amour avec un nègre sans se fatigue,” which was later adapted for the screen and earned Laferrière a nomination for Best Adapted Screenplay at the 11th annual Genie Awards.
Over the past decades, he has won several prestigious awards for his writing, including the Prix Médicis, Prix international de littérature and the Grand Prix du Livre in Montreal for his 11th novel L’énigme du retour.
Mr. Laferrière, who was appointed officer of the National Ordre du Québec and awarded the Order of Canada with the grade of Officer, was also named by the government of France Commander of the Légion d’honneur and Commandeur des Arts et des Lettres.
On Monday, June 4, he was conferred with a Doctor of Letters, honoris causa.

Dr. ANNA LARTEY
Based on her expansive body of research and work in the field, Ghanian-born Dr. Anna Lartey is recognized as an authority in the arena of Global nutrition.
She is a Fulbright Scholar with a PhD in International Nutrition from the University of California, boosted by close to three decades of teaching and research in Sub-Saharan Africa, during her tenure as Professor of Nutrition at the University of Ghana.
Her research was responsible for the development of the World Health Organization’s Growth Reference Standards, which have now been adopted by 125 countries as well as helping to gauge how maternal HIV affects infant nutrition.
She also assisted in the establishing the Nutrition Research and Training Center in Ghana, an international dietetic internship institution that facilitates training for graduate students and professors as well as research.
Dr. Lartey, who holds a Bachelor of Science from University of Ottawa and earned a Master of Science degree from the University of Guelph, is the past president of the International Union of Nutritional Sciences, an international NGO dedicated to the promotion of science, nutrition, research and development through international cooperation.
She currently is the Director of Nutrition at the Food and Agriculture Organization of the United Nations.
On Wednesday, June 6, McGill conferred Dr. Anna Lartey with Doctor of Science, honoris causa.
Other illustrious Canadians who received honorary doctorates from the university for 2018 include Orna Berry, Alice Mannor Chan-Yip, Jitender Dubey, Monique Jérôme-Forget, Maria Klawe, Zarin Mehta, Hillel C. Neuer, Peter Salovey, Gerald Sheff, John E. Wennberg, and Eli Yablonovitch.