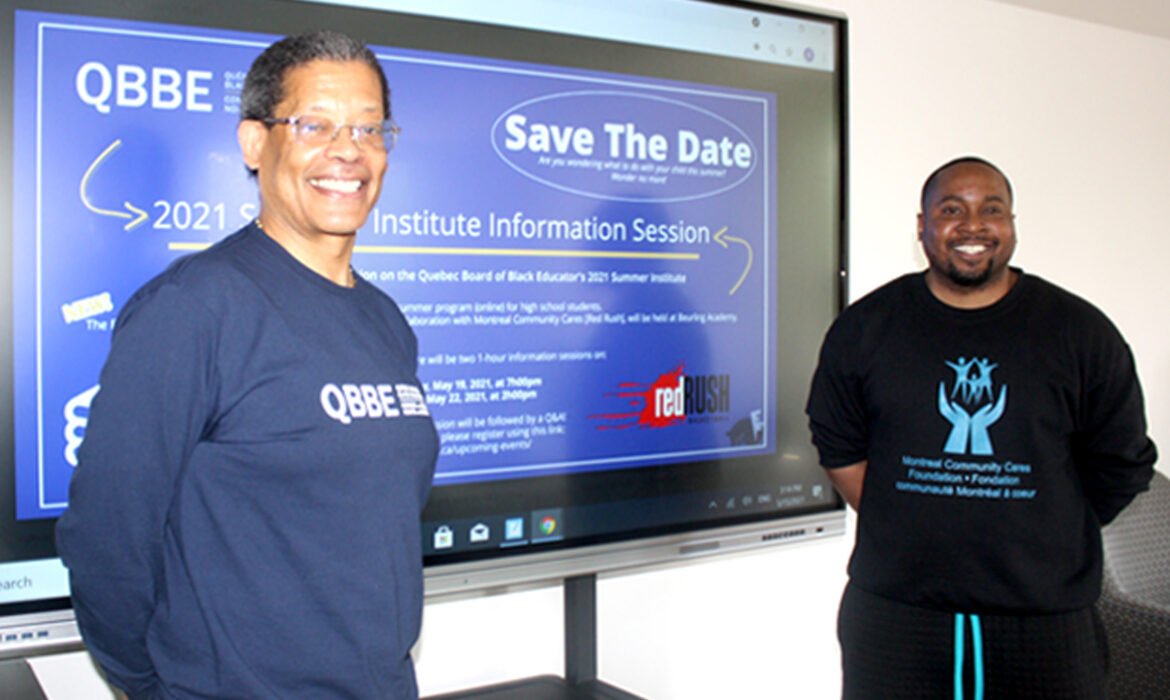 In the areas of education and sports, Alix Adrien and Denburk Reid make a formidable combination. Both has been involved with the game at the highest levels, Adrien as a high school coach, Reid as a professional player and a Hall of Famer at McGill University where he is still the all-time scoring leader.

The duo is equally outstanding in the education arena where Adrien, currently the executive director of the Quebec Board of Black Educators (QBBE) is coming off more than four decades as a highly respected educator, who served as a school principal, vice principal and a high school Math and Physics teacher.

And Reid, founder of the Red Rush Basketball program and the Montreal Community Cares Foundation, earned his BA in Economics and Management and recently completed a Master’s in Educational Leadership at McGill.

Recently they have decided to put their experience and talent to work on behalf of our community and the city by collaborating in the launch of the QBBE’s 2021 Summer Institute, which will offer educational support as well as training in basketball, physical and mental well being and leadership to students between July and August. More than 350 are expected to participate,

“This collaboration is to empower our youth. It will also help to close gaps and help kids who are coming from difficult situations by uplifting them through education and sports,” he told the CONTACT at a recent sit-down at the offices of the QBBE on Sherbrooke Street in NDG.

“This is exactly what it looks like when community groups collaborate,” say Adrien, whose organization has been running its summer remedial education program over the past 53 years.

Since 1968 the QBBE’s BANA and DaCosta Hall programs have helped more than 15,000 students boost their chances in high school and colleges with supplementary summer school courses.

This year, both programs are part of the Summer Institute, which Adrien expects will continue to grow with other collaborations.
“The concept of launching this institute came out of collaborations with community advocate Leith Hamilton and the goal is to continue building partnerships with other community organizations using the QBBE’s expertise in education to secure better outcomes for students in our community,” says Adrien, who holds a degree in Mathematics from the University of Ottawa, a diploma in Education from UQAM and is a course from completing a Masters degree in Educational Leadership at McGill University.
Ultimately he says, the hope is that the institute will also form partnerships with local universities and with Historical Black Colleges and Universities in the USA to tap into their advance expertise in educational strategies for students that are Black or from minority communities.

He added that part of the goal is to direct more students into STEM (science-technology-engineering and math) programs with modifications to include the arts, which he says is very important for many in our community.

Adrien is excited about this initial partnership with Red Rush Basketball Program.
He says it’s especially meaningful not only because of the lifelong friendship that has grown between him and Reid whom he taught physics and coached at Ecole Secondaire Mont Royal but because of Reid’s passion of promoting education and leadership through sports.

For his part Reid, who played professionally with the Montreal Matrix and who was inducted into McGill University’s Hall Of Fame in 2012, says sports is just a vehicle.
“The real value is education… that has always been my message.”