Master Harold and The Boys at the Segal 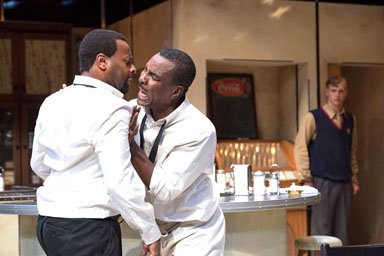 Warm yourselves this winter with Athol Foulard’s classic, Master Harold and The Boys. A coming-of-age story that was once banned at its inception in South Africa is set to hit the stage at the Segal Centre For The Performing Arts this winter.

First produced at the Yale Repertory Theater in 1982, Master Harold and The Boys is based on the playwright’s early life in South Africa. However, the play itself is not a mere recital of an incident from his past. Instead, Fugard has gone beyond personal experiences and extended it into a story that touches on key issues in our world.
Master Harold was awarded the Drama Desk Award as well as the New York and London Critics Circle Awards.
Set in 1950s South Africa, Master Harold and The Boys is a powerful examination of the impact of apartheid on the relationship between friends from two different races. Seventeen-year-old Harold does his homework while two Black men, who have long worked as servants for his family, clean the floors.
As the day unfolds, the three fondly reminisce about times spent together, but when news comes that Harold’s alcoholic father is returning home, affections turn to anger, intimacies sour, and the personal becomes political.
It is a very relevant piece in this current climate, where issues such as racism are still very much woven into the North American society’s fabric.
The play features Haitian-born actor, Allan Louis, famous for his work in Stomp the Yard and Ontario native, actor and producer Andre Sills.
It will be playing at the Segal Centre for Performing Arts in Montreal from January 21-February 11, 2018. And should not be missed.