Advertise with Us
Home News Community News Haters will hate. Subban will continue to win

Haters will hate. Subban will continue to win 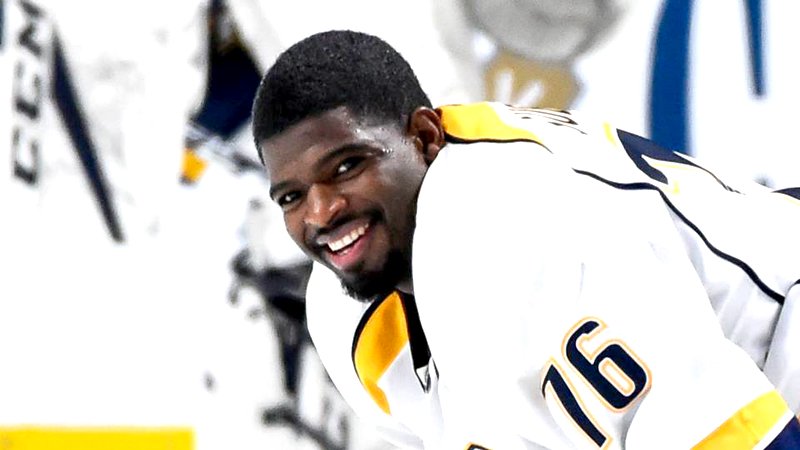 After his unceremonious trade, P.K is still standing and playing while his detractors pout

What is it about P.K. Subban that provokes so much unruly emotion in so many Montrealers?
I know.
He is an amazing hockey player and he’s Black.
In a city with a strange fetish about the game and an ingrained misunderstanding of young Black men, P.K, with all his skills, talent, color and flair was like one of the so-called “Injuns” in the old John Wayne movies…. He didn’t stand a chance of finding his place in this city.
He had to go.
But it doesn’t matter how far away he goes, P.K. remains stuck in the craw of many of his detractors in Montreal, especially now that the home team players are sunning out their uniforms for next season, while he and his new team, the Nashville Predators, are playing for the Stanley Cup.
It’s safe to say that as long as he continues to win and to shine, and if indeed he wins the prized trophy, these haters will find it difficult to swallow.
How sad it is that Subban’s extraordinary prowess on the ice will never be fully appreciated in Montreal, his first NHL town, primarily because he is Black, as difficult as that might be for many to accept.
Listen to the pundits on the sports show circuit on radio and television and hear them vacillate on Subban’s talent, his personality and his importance to his new team.
Basically, a collection of supposedly intelligent individuals drawn together in their refusal to accept the 28-year-old defense man into the fold of hockey greatness because of a supposed flaw in his character that makes him suck all the oxygen out of any room he steps into.
It’s because of the way he dresses, the way he speaks, the music he listens to, and everything else he does off the ice. It gets to people.
One commentator, unable to control his emotions called him a clown, because Subban did a little dance during the introductions before a game. Imagine the internal rage that provokes (you) to call someone a clown in public.
Recently, the press was able to dig up some mediocre player to state publicly that Subban was “garbage on the ice.”
Oh, the hate.
One of the most vicious so far has to be the hatchet job the Montreal Gazette attempted on the young man in an opinion piece by one Jack Todd, headlined ‘Not because of Subban” published on Monday, May 7.
Unbelievable in its triteness, backwardness and simple bad-mindedness, the column written by one who is supposed to be one of Montreal’s respected sports hacks, can only be taken as an attempt to comfort those in the city who are aching because Subban has taken an unlikely team to the finals.
Todd was merciless in his attack on Subban, calling him out for his supposed failings in his team defeat in a playoff game against the St. Louis Blues. He identified two plays: P.K. Subban was in front of the Nashville net early in Sunday’s Game 6 against St. Louis, doing not much of anything except screening goaltender Pekka Rinne when the Blues scored to take a 1-0 lead.
That happened maybe 90 seconds after Subban wound up for that big slap shot in the Blues end, only to have it swallowed up in a heap of bodies. He went to conclude that: Subban does have a tendency to wander without any specific purpose in the defensive zone and to become overly infatuated with his own shot when his team is trying to score.
Obviously, in his haste to tar and feather Subban, the writer, who the late Bob White always described in the most unflattering ways, chose to conveniently forget the extended minutes Subban was called upon to help the Montreal Canadiens win so many games. And the benefits of that same slap shots that helped him wrack up more than 63  goals and more than 200 assists  for that ungrateful team, which unceremoniously traded him to what many deemed at the time to be a backwater team.
Must confess that this writer knows shyte-all about hockey (talk to me about cricket, especially West Indies cricket in our heyday, and soccer, and you’ll learn a thing or two…). And it pains me to challenge the opinions of any journalist, as distasteful as some can be, but those limitations and self-imposed restraints became unhinged in the midst of the on-going attempt to attach asterisks on the achievements and talent of this young Black hockey superstar.
Here’s what Todd and other detractors want you to believe: It’s not because of Subban that the Nashville Predators made it to the Stanley Cup finals and might even win it.
And if it’s not because of Subban, how the arse do you explain that the same Predators have been languishing on the edge of average for much of its history.
In the 18 years since they entered the NHL, the Predators have on a couple occasions made it to the first round of the playoffs, only to get whipped early, and regularly.
Even after they made one of the biggest deals in the history of the game, offering a $110 million, 14-year contract to one Shea Weber in July 2013. They didn’t make it to the playoffs the following season.
Now here comes Subban: flamboyant, loyal and skillful, with a capacity to control the ice, evoke terror with his slap-shot, while guarding against even the best forwards in the league and voila… Nashville is hockey town and the Predators stand on the edge of glory.
And through it all his fans and supporters are lapping it up. One intrepid entrepreneur renamed his bar Chez Subban.
Meanwhile, Jack Todd, some in the Gazette, sports commentators on Montreal radio and television, and the management at the Montreal Canadiens still haven’t gotten the message: you can’t stop the tide…it comes in, it recedes…
Get use to his blackness and enjoy PK.