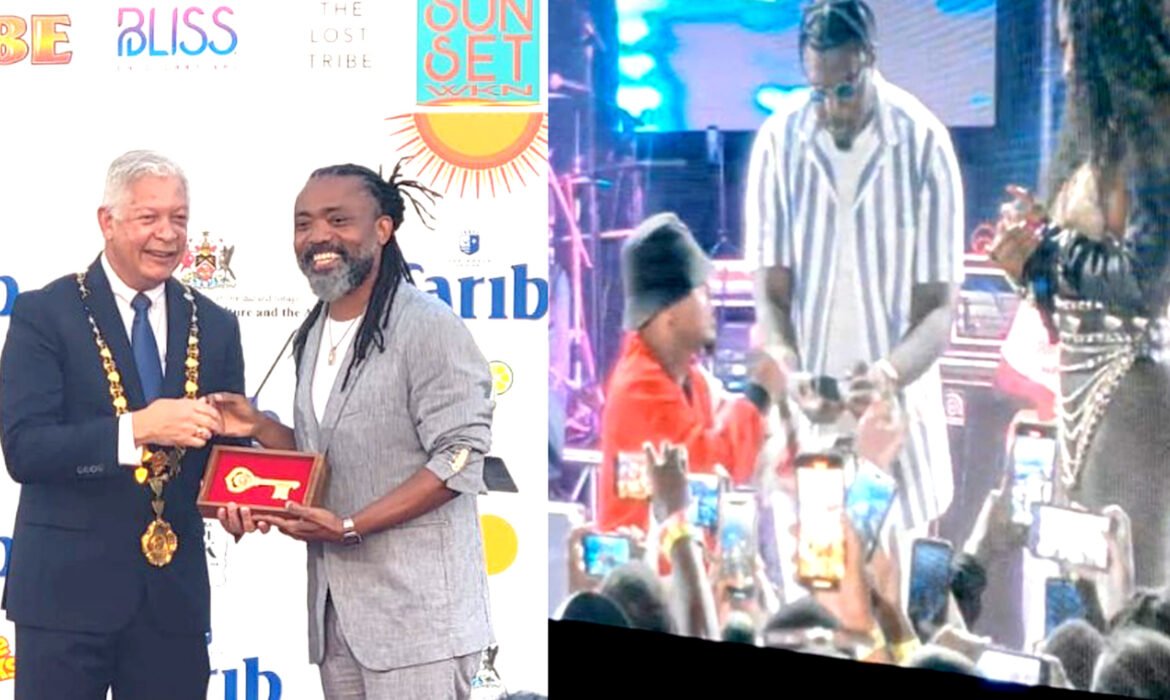 All eyes are on Toronto Caribana this year, as it is anticipated to be the most attended one. So next issue we will do a Caribana recap.
But for now, did you know that Machel Montano got the key to the City of Port of Spain and Popular Soca couple Ricardo Drue and Patrice Roberts are engaged?
Montano is celebrating 40 years in Soca this year and was given the keys to the city of Port of Spain on July 22. The Key to the City is an honor bestowed on outstanding citizens who have contributed to society.
The presentation was made by PoS Mayor Joel Martinez as part of mas company Tribe Carnival and Ultimate Events’ launch of Sunsetwkn (Sunset Weekend)– the weekend-long launch of Tribe’s 2022 Carnival presentation A New Dawn. The event was held at Ariapita Avenue, Port of Spain.
Montano, in accepting the honour, said receiving the key to Port of Spain, the epicentre of carnival, gives him strength to continue for another 20 years and he wants to use those years to continue inspiring others.
Martinez said Montano who is known as the King of Soca, is a trailblazer and an inspiration to all and is deserving of the honour.
Montano said the honour was not just earned for himself, but on behalf of his friends, family and fans. He said in thinking of a key, one thinks of a door and a window and this will be a window of opportunity for him to share his wisdom and experience, as he continues to pave the way for those coming behind.
Popular artiste Ricardo Drue, an Antiguan native has proposed to long-time partner and fellow Soca heavyweight Patrice Roberts.
On July 26, during his performance at the Druesday carnival show in Antigua, Drue popped the question while on stage: “Will You Marry Me?”
“Hell, yeah!” said Roberts, clearly caught off guard by the proposal.
“She is now officially an Antiguan,” said Drue to the cheering crowd.
Although the couple have been on and off for years, their relationship got more serious after the birth of their daughter.
The couple made their relationship open to the public on social media last year after the release of Toxic Love.