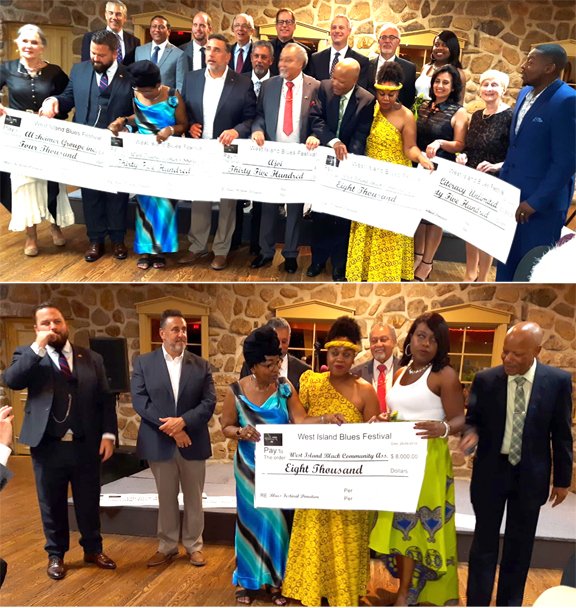 The West Island Blues Festival was built on a foundation that keeps it connected with surrounding communities.
That’s why over the past 15 years, in addition to becoming an annual source of summertime fun and entertainment in the West Island, it has contributed close to  $200,000 to regional organizations that serve a variety of interests and individuals.
This year, on the heels of the well-attended festival staged at Dollard Des Ormeaux Park on June 16, they were able to donate $21,500 to five groups, including the West Island Black Community Association that received $8,000. They gave $3,500 to the West Island Women’s Shelter,  $4,000 to the Alzheimer’s Group, $3,500 to AJOI a group serving disenfranchised youth in the West Island and  $2,500 went to Literacy Unlimited.
The presentations were made at the annual WIBCA Banquet and Ball hosted on Saturday, September 29.
Festival founder and president Errol Johnson told the CONTACT how important it was for them to donate to the various causes that contribute to community life in the West Island.
“It has become the raison d’etre of the festival.
We launched it as a simple fund-raiser for the West Island Black Community Association and it was a grand success,” he said. “But realizing that there’re so many groups working in the community out here, we had no choice but to expand our list and help as many as we can.”
Over the years, organizations such as The West Island Association for the Intellectually Handicapped, The West Island Palliative Care Centre, Portage House, Call of The Wild and The Arthritis Association were among the many others benefitting from the outreach of the festival.
Johnson, one of the longest serving city councilors in DDO says as a result, the Blues Fest has entrenched itself in community life among West Islanders and has been steadily growing in popularity.
He says also that organizers of the event, which include co-fonder Dimitrios (Jim) Beis mayor of Pierrefonds-Roxboro, Benoit Langevin, Tania Charron, Michael Doig, Colin Porte, Michael Stanley, Fay Johnson, Steve Vivier and Patrick Roy, pride themselves on the professionalism that surrounds the festival.
“It’s important because attracting corporate sponsors is a big part of our funding strategy.”
Johnson says getting TD Bank on board this year, as a major sponsor, is a significant achievement for the festival.
“TD is heavily involved in assisting festivals and helping to build community life across the country, so we’re hoping to establish a solid long-term relationship with them,” he says.
He also pointed to the many other corporations that have been lending their support to the festival, such as All State Insurance, Audi Prestige DDO, Vivier Pharma and Steve Music Store.
“Another big part of our fundraising efforts centers around the VIP Evening, which takes place the week before the outdoor event and attracts a lot of individual support for the festival.
Looking back over the past 15 years, Johnson says he is proud of the fact that the festival has grown to be one of the biggest and most exciting outdoor events in the Montreal area.
“Our aim is to continue to build the Blues Fest with the help of the community and stay true to our commitment to lend a helping hand to people around us.”