Advertise with Us
Home Special Features Transport MInister made a stop-over at MR. PATTY’s BBQ

Transport MInister made a stop-over at MR. PATTY’s BBQ 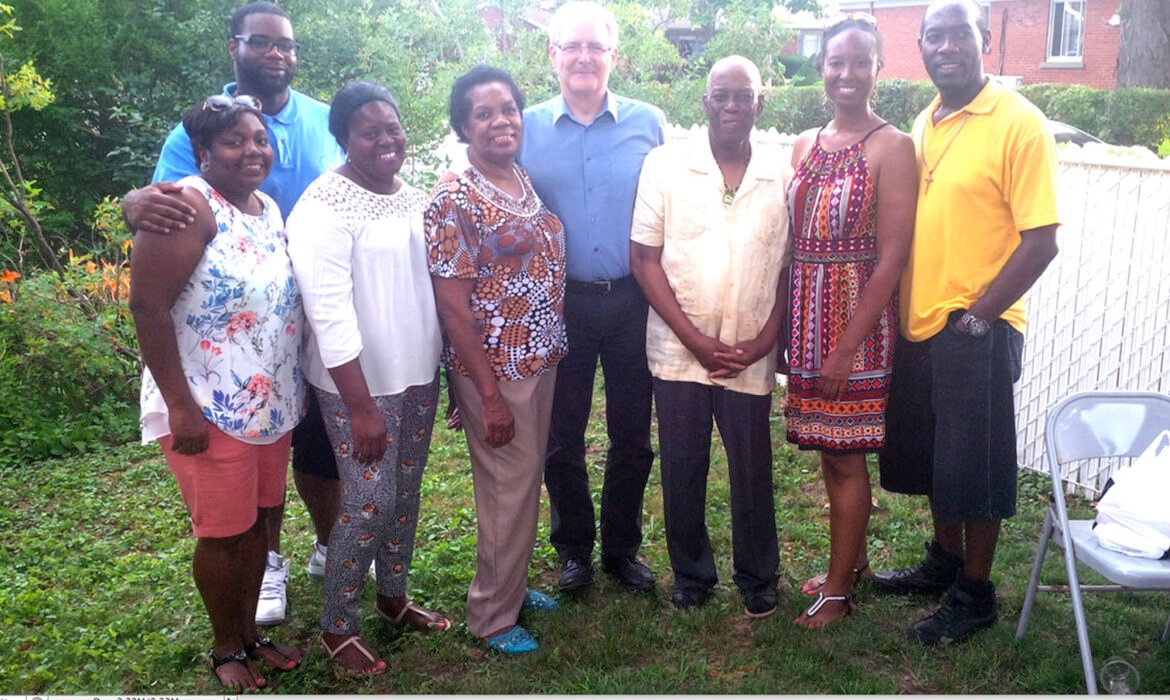 On Sunday July 17, Federal Transport Minister Marc Garneau made a surprise visit to the home of David and Madge Bailey in Cote St. Luc. The occasion was a special BBQ to celebrate the birthday of David, whom much of Montreal know as Mr. Patty.
Garneau, Member of Parliament for Notre Dame de Grace-Westmont  built a spectacular career as Canada’s first Astronaut in Space and a naval  engineer before being elected to office.
He was named to the transportation portfolio by Prime Minister Justine Trudeau after the Liberal swept into office last year.
He used the occasion to share in the bountiful delights of the Bailey household including jerk chicken, BBQ chicken BBQ Pork, **** fried fish, and of course patties with the more than 100 guests who showed up for the occasion.
And in presenting David with an official citation from the federal government, Mr. Garneau shared with guests the remarkable story of Mr. Patty’s entrepreneurial journey from Manchester, Jamaica to the little haven of culinary delights located on Patricia Street on the north eastern edge of NDG.
David met his wife Madge at a bakery where they worked in Kingston, Jamaica. They moved to Montreal in the early 1980s and started putting down the foundation for their business.
Not long after settling here, David found work at Real Bagel and Madge as a nurse. T Both worked nights and during the day, they made patties in their apartment to sell to  local churches and to friends and relatives.  Word spread quickly about the delightful tasting snacks.
In 2004, the little home-based business  moved to it’s current location, as Mr. Patty. But it continued to be fueled by the passion of David and Madge and their immediate family.
Their children Rohan,  Yvette and Donovan, all had full-time jobs but made time to pitch-in and help mom and dad and their neice Colecia get the business off the ground and keep it afloat. Other members of the family ever present to lend a hand.
Mr. Patty started as a small, take-out restaurant specializing in patties and other baked goods but as its popularity of expanded so did it’s menu to include Roties, Jerk Chicken and Jerk Pork and Caribbean culinary adventures.
A fundamental part of the success of Mr. Patty has been the family determination to give back to the community and they have help extensively when they are able to. Organizations such as The Quebec Amateur Netball Federation, The Jamaican Association of Montreal, The Imani Family and Full Gospel Baptist Church, The Montreal West Church of God of Prophecy, The Young Achievers Recognized for their Dedication to Succeed (Y.A.R.D.S) have all benefitted from their generousity.
During his recent visit to the BBQ at the Bailey’s home the transport minister discovered something Mr. Patty’s clients knew all along: there’s very little substitute for  great tasting food.
Mr. Garneau congratulated David Bailey and his wife Madge  for  their years of hard work,  for expanding the culinary landscape of the city and for building a great family.