Advertise with Us
Home Special Features The songs of Aliah

The songs of Aliah 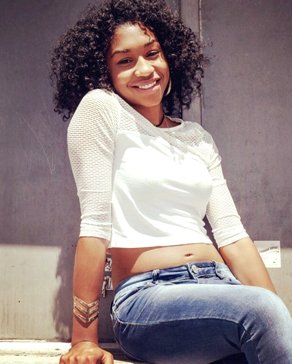 A handful of the audience at the recent West Island Blues Festival stayed late into the night, long after the featured act, Freddie James, had left the stage to enjoy the musical offerings of what has been billed as an emerging act. They will not soon forget what Aliah Guerra had to offer.
In fact, by the time she was done delivering her repertoire of seven songs, which included one or two of her own compositions and a few popular numbers such as George Benson’s Masquerade, the audience, many of whom were in the park for several hours, wanted more.
The 20 year-old singer-songwriter who had her first performance as a five-year-old at a talent show in NDG has a way of winning people over with a style not far removed from Erykah Badu or India Arie. She told the Contact although education is a big part of her plans for the future, she is totally committed to her musical journey and is excited to see where it leads.
She says she has been on it as long as she can remember, from her days at Elizabeth Ballantyne Elementary School right on to Westmount and Lindsay Place High Schools. She also took piano lessons at the Cote des Neiges Black Community Association for a couple years before she started teaching herself to play the guitar in 2010, and two years later, with a home studio set up, she began to explore her skills as a songwriter.
And like many of today’s emerging artists, she was soon offering her music on YouTube for others to enjoy, sample and critique.
Aliah is also big on community, having spent much of her life benefitting from organizations across the city, such as St. Raymond’s, West Hill, Loyola Centre, Westhaven and the CdNBCA. And devotes a lot of time working with young people and community groups such as the West Haven Centre and the West Island Black Community Association, where she works as a coordinator.
“Like music, I’m at home when I’m working with children because I see a lot of myself in them and can really relate to some of them as spunky as they might be.”
Over the years at elementary and high school she has won more than her share of academic awards and citations, and  now as she makes her way from Vanier College to Concordia University, where she will be studying political Science, she says her passion for music ties in with her desire to help bring about social change.
“The way I see it, education is a way to change our future and music is a great way to create change.”
And so she plays.