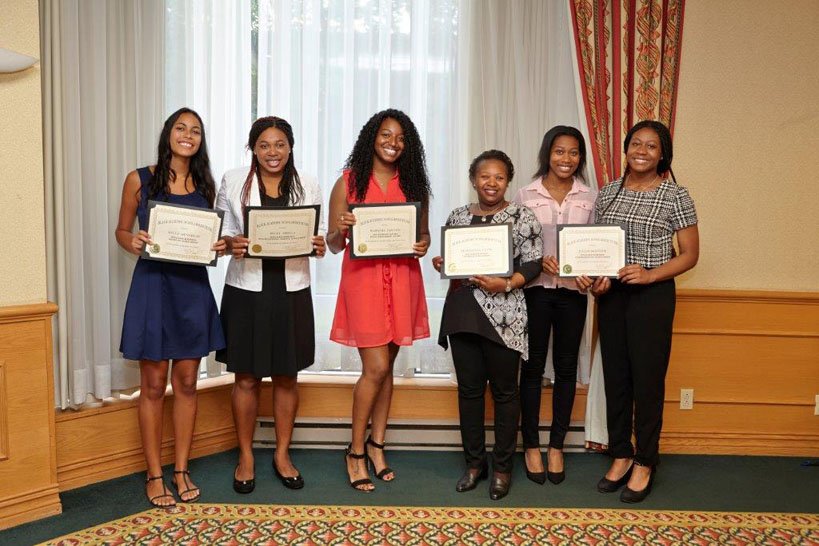 On Sunday, September 10, the Black Academic Scholarship Fund (BASF) held its annual award luncheon and awarded several outstanding students scholarship certificates.
The BASF is a non-profit organization active in Montreal since 1991, working to enhance the economic status of our community and providing more educational opportunities for visible minority youth.
In so doing it strives to promote entrepreneurship and excellence among professionals, and providing financial support to youth.
Among the scholarship winners are Kelly Hennegan – McGill University – Pharmacology, who earned the Jackie Robinson Graduate Scholarship.
Kelly is a former Jackie Robinson Scholarship recipient, who earned the Health Sciences award in 2012. She is a straight A student who recently completed her undergraduate degree at McGill, majoring in Pharmacology with a minor in Psychology. She has been accepted in the M.D, C.M graduate program at McGill University.
She is also a research assistant at MUHC Research Institute and a Scientific English Editor for the Montreal Neurological Institute. Kelly created a Pharmacology workshop for disadvantaged high school students, and has been the recipient of several academic awards and accolades. She is a workshop coordinator for Explore! Careers in Health Pharmacology, and a part of the Quebec Black Medical Association Youth Initiative. Her extracurricular activities include track and field, and hospital volunteering.
Kelly aspires to one day own a healthcare practice.

Julian McKenzie – Concordia University – Multiplatform Journalism, received the Jackie Robinson Undergraduate Scholarship.
Julian recently completed his undergraduate degree in Multiplatform Journalism at Concordia University. He is currently a graduate student in Television, Radio, and Film at the Newhouse School of Public Communications at Syracuse University. He aspires to be a professional journalist working in various forms of media, such as print, radio, and video.
He was a teaching assistant this past year, and a radio host at the Concordia campus radio station, CJLO 1690 AM. He is the co-founder, co-host, and producer of The Starting Rotation, a weekly sports radio show at the station. Julian has freelanced for various publications, such as The Montreal Gazette, NOISEY, The Montreal CommunityCONTACT, The Manitoban, and was the sports journalist for the Link. He was the winner of the “Sportsnet U Recruited Contest,” where his winning article was featured on the Sportsnet website. He was the CJLO Diego Award Winner for “Best Radio Voice” and “On-Air Professionalism.”
He is very much attuned to multiple social media platforms, stressing its importance as a tool to building a name for himself.
Julian has been on the Rugby and Football teams at his schools, plays the piano and enjoys film, reading and writing. He has volunteered at several activities with the Union United Church, the Montreal Children’s Hospital and The Cedar Cancer Institute.

Abakasanga Etang – Vanier College – Social Sciences received the Jackie Robinson Entrance Scholarship
Abakasanga is the first recipient of the new Jackie Robinson Entrance Scholarship. He has been the recipient of two other Jackie Robinson Scholarships, in 2009 and 2014. He will be double majoring at Lakehead University, with an Honors Bachelor in Outdoor Recreation and a Bachelor in Women’s Studies. He has just completed the Social Science program at Vanier College, majoring in Women’s Studies. His interest in gender issues helps him to be more socially conscious, which he says allows him to have a broader perspective on society.
He has been a teaching assistant for an outdoor education program for Vanier College’s Physical Education Department, which coincides with his deep love for the outdoors, an English tutor, a mentor for Aboriginal high school students, and an animator during Vanier College activities.
Abakasanga has also been on the Dean’s honor roll several times, and received many other distinguished awards during his stay at Vanier College. He is a serving member of the Canadian Armed Forces, which keeps him disciplined, and allows him to implement leadership skills in his studies and his day-to-day life.

BECKY MBELLA – CHAMPLAIN COLLEGE – NURSING earned the Jackie Robinson Health Sciences or Nursing Scholarships
Becky recently completed the Nursing program at Champlain College, where she has been on the Honor Roll multiple times. She has been admitted to McGill University in the Bachelor of Nursing program. Her teachers have noted her knack for efficiency, organization, and professionalism, remarking on her eagerness to learn, and how she strives for excellence. Although being a full-time student and raising a family, Becky has found time to volunteer at the Montreal Children’s Hospital, where she provides one-on-one time with the children.
She is a PAB (Préposé aux Bénéficiaires) at the CHSLD St-Lambert sur-le-golf. Becky is also an active member of Bakweri Association of Cameroonians and a Sunday school teacher and superintendent at Greenfield Park United Church.

Mahkeda Newton – Vanier College – Special Care Counselling earned the Batshaw Award.
Mahkeda has completed the Special Care Counselling program at Vanier College, and is now a McGill University student majoring in Social Work. She wants to one day be a social worker for troubled youth and believes that in order to be successful and discover one’s own fullest capacity and capability, one must attain higher education.
She has volunteered at CHSLD Bayview, helping residents with decision-making. She has also volunteered at West Montreal Readaptation Center at Vanier College, and at Welcome Hall Mission, focusing mostly on implementing activities geared towards children.
Mahkeda credits her godparents with helping her to become the individual she is today.