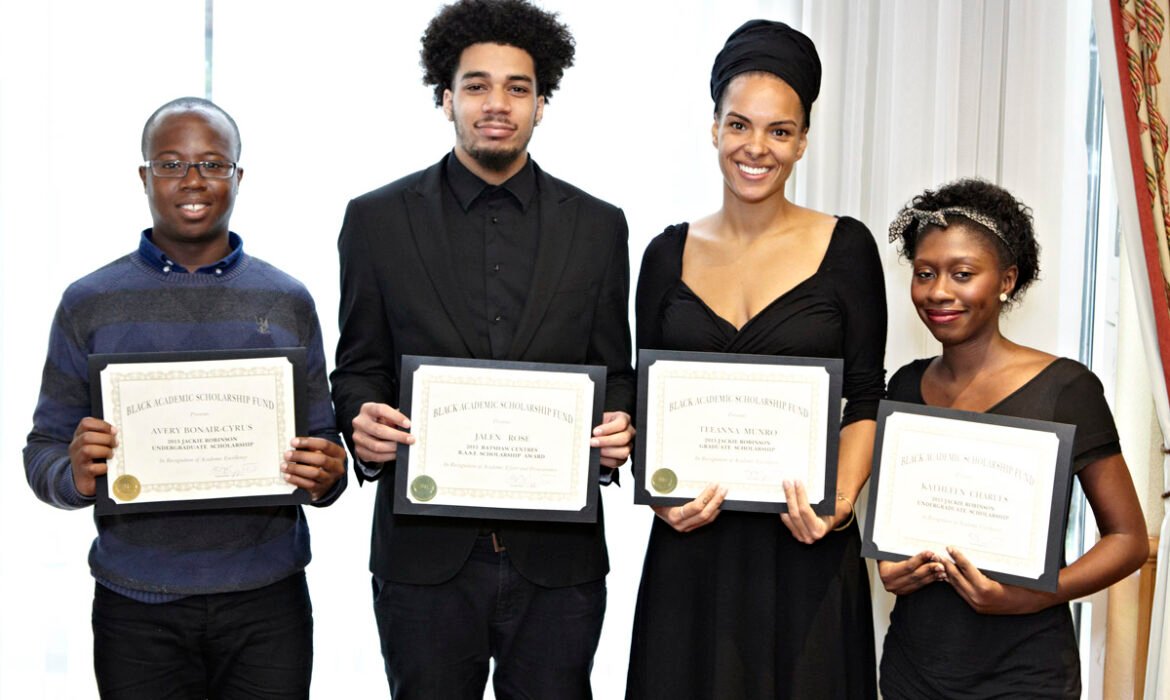 Three university and one CEGEP student were awarded scholarships by the Black Academic Scholarship Fund (BASF) at the annual awards luncheon and ceremony held September 14th, at Le Nouvel Hôtel in downtown Montreal.
BASF President, Sylvia Piggott and board member/scholarship coordinator Kathleen Suite, hosted the event recognizing scholarship recipients Teeanna Munro, Kathleen Charles, and Avery Bonair-Cyrus for their impressive academic performances and commitments to giving back to their communities.  As well, this year’s Batshaw Award was presented to Jalen Rose.
Teeanna Munro is an aspiring educator who has been accepted into a Master’s program in Teaching and Learning at McGill University.  She recently completed an Undergraduate degree at Concordia University, majoring in English Literature.  Teeanna’s decision to dedicate her career to teaching is based on her recognition of the power and influence that education has had on both her life and those in her community.  In addition to her academic endeavours, Teeanna is also very much involved in her community.  As a summer program animator with Desta Black Youth Network, she organized and created programs to encourage and educate the participants.  Teeanna is also a regular supporter of the organization, where she helps to plan and coordinate events and activities.
Kathleen Charles is a second year Psychology major at the Université de Montréal.  Her goal is to pursue a career as a marriage and family therapist.  Coming from a disadvantaged background, Kathleen soon recognized that education is the key to success.  She also recognizes the need for trusted individuals to whom members of her community can turn for assistance.  In addition to her studies, Kathleen volunteers with Osmose, an organization that helps educate secondary 4 and 5 students on the various aspects of mental health.  She also works with Maison de la Famille Pierre Bienvenu Noailles, an organization which arranges supervised visits for parents who have lost custody of their children.
Avery Bonair-Cyrus is currently a student in McGill University’s Music Theory Program.  He has been playing the cello for over 15 years and has now transitioned from student to teacher.  He is the cello teacher in the Viva! Sistema program at Saint-Gabriel”s Elementary school in Pointe Saint-Charles, a program which provides free music lessons to under-privileged students in the community.  Although Avery has toured with the National Youth Orchestra, won a variety of music competitions and toured internationally, he has come to realize that most of his joy comes from teaching his musical passion to others.  Upon completion of his current program, Avery intends to pursue a second degree in Education.
Jalen Rose is this year’s recipient of the Batshaw Award.   He is a second year student at Dawson College in the Social Sciences program.  Although he is unsure of his career path, he aims to obtain enough knowledge to allow him to achieve success and find a meaningful career.  For most of his life Jalen has lived in Batshaw’s adolescent group homes.  During those years he was able to channel his high energy into basketball, a sport in which he excelled.  Despite many obstacles, Jalen has succeeded in maintaining his grades and has managed to keep a positive outlook on life.
Dr. Dexter Johnson, a long-time supporter of BASF was this year’s keynote speaker.  Dr.  Johnson is a Board Certified Oral and Maxillofacial Surgeon in Canada and the United States, with degrees from McGill University, New York Medical College and Harvard School of Dental Medicine.
Dr. Johnson’s inspirational talk emphasized the importance of perseverance and hard work in the pursuance of one’s goals.  “There is a difference between a wish bone and a back bone”, he noted.  With hard work, and by surrounding yourself with like-minded successful people, anything is possible.  Using himself as an example, he offered that nobody in his family had gone to medical school, but with hard work and determination, he was able to achieve his life-long goal of being a doctor.  Success is possible for anyone who is willing to apply themselves, he concluded.
The luncheon was attended by the scholarship winners, their Family and supporters, the BASF’s Board of Directors and their honoured guests, which included Dr. Dexter Johnson and his wife Dr. Anita Brown-Johnson, Dr. & Mrs. Clarence Bayne, Mr. & Mrs. Howard Dayle, Mrs. Edelmera Harrison, Mrs. Linda Marques of Collins Clarke, Mrs. Belin Alleyne, as well as Mr. Sam Barile and Ms. Beverly Robinson, both of Batshaw Youth and Family Services Centres.
The Black Academic Scholarship Fund (BASF) has been awarding scholarships to deserving students for over two decades. Their annual golf tournament fundraiser has allowed the organization to award 230 scholarships since its inception in 1991.
For more information on the Black Academic Scholarship Fund (BASF) or to make a donation, visit www.basfund.ca
For photos of BASF events and updates of their activities, like them on Facebook.
https://www.facebook.com/BASFMtl