Revisiting the Congress of Black Writers 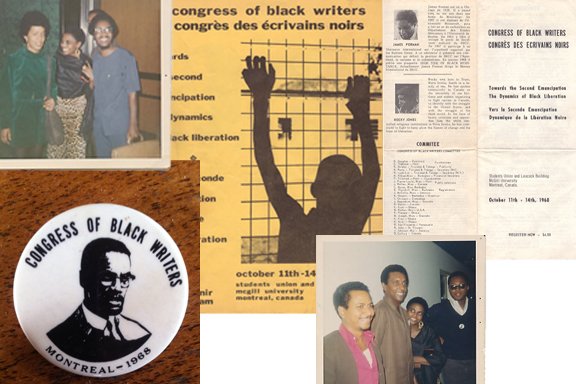 More so than in any other Canadian province, politics is a constant in Quebec, day in day out. And Montreal as its economic and political centre has always been the hotbed from which so much of it emanates.
Such as it was leading up to the weekend of October 11-14, 1968, when extended periods of labor unrest by police officers, teachers and taxi drivers and social restlessness by student, anti-poverty and women’s advocacy groups fueled the politically charged climate that became the back-drop for the Congress of Black Writers.
That according to respected author David Austin, who dedicated close to 25 years studying the event that he described as a “contemporary laboratory, a window into the world of Black politics and part of an important moment in the sixties.”
The four-day event held at the Student Union Building of McGill University, brought together a gathering of the world’s most illustrious advocates in the struggle for what was then described as Black liberation and empowerment.
Former student leader and Dominica Prime Minister Rosie Douglas was one of the co-chairs. And participants came from far and wide; they included a range of professionals and experiences.
Two legendary writers and global thinkers from Trinidad and Tobago were among the featured speakers, C.L.R James and Stokely Carmichael, as well as intellectuals Bobby Hill of Jamaica, Walter Rodney of Guyana and another Trinidadian, Darcus Howe, who resided in England at the time.
Also on hand were several African-American academic heavyweights, Professor Harry Edwards who masterminded the athletes’ Black-power protest at the 1970 Olympics in Mexico, acclaimed psychiatrist Alvin Poussaint, and James Forman, civil rights leader and then-member of SNCC, The Black Panther Party and the League of Revolutionary Black Workers.
Two women, Canadian Joan Jones, a community worker and Trinidad’s Barbara A. Jones, a plant geneticist were identified as having pivotal roles in the event.
Having explored the significance of the Congress in two of his books, Fear of a Black Nation: Race, Sex and Security in Sixties Montreal and the recently-released, Moving Against the System: The Congress of Black Writers, Austin points to two of its major impacts on Canada.
“It represented a public announcement that Black people were ready to stake their place in this country,” he told the CONTACT. “It also showed that the issue of anti-Black racism was a feature of Canadian society.”
He says the biggest take-away from the discussions that involved some of the best Black minds on the planet was its direct and indirect connections to political struggles in the U.S., the Caribbean and Africa.
“The individuals involved in the Congress were fighting to change things for Black people, but in so doing they were changing the world for everybody,” he says. “And sadly we have underestimated what came out of it.”
He says although Montreal was the epicenter of the massive movement for change and empowerment of Blacks, it’s difficult to gauge how our community has been able to capitalize on it.
“I think we are stuck in a strange place where a few have moved forward, but the vast majority stuck in the same place or regressed.”
Austin says that he can say categorically that Anglophone Blacks have become more transient and at the same time further removed from power.
“The question now is how do we organize strategically for the future… what I can say is that we have a younger generation that has the potential and the intelligence, but are we equipped.

This month marks the 50th anniversary of the historic Congress of Black
Writers. Join author David Austin for the launch of two books: Moving
Against the System: The Congress of Black Writers and the Making of Global Consciousness and Dread Poetry and Freedom: Linton Kwesi Johnson and the Unfinished Revolution….