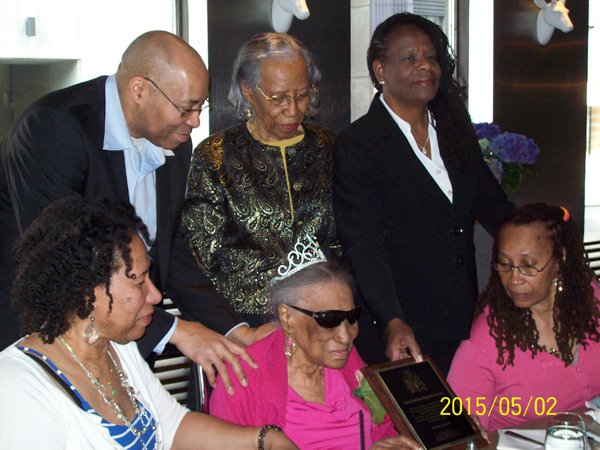 On Saturday, May 2, Mrs. Edna Bertha Pilgrim-Porter was at Restaurant Branzino in downtown Montreal surrounded by relatives and friends, the most fitting way to celebrate her 100th birthday.
In the midst of the free flow of joy that marked the occasion, she received an impressive list of awards and commendations from Her Majesty Queen Elizabeth; His Excellency David Johnston, Governor General of Canada; His Worship Denis Coderre, Mayor of Montreal and from Her Excellency Yvonne Walkes, High Commissioner of Barbados to Canada.
Mrs. Pilgrim-Porter was born in Christ Church, Barbados on May 1,1915 and built a wonderful life there before immigrating to Canada in 1974 where she planted her roots at Evangel Church.
Mrs. Pilgrim-Porter is the mother of four children, Harriete (deceased), Felicia, Andrea and Kenneth, and grandmother to numerous grandchildren and great grand children.
Some, including her sister Marion Moore, her daughter Andrea and grandchildren and great grandchildren travelled from as far off as Toronto, Alberta, New York and Virginia to be part of this golden celebration.
Montreal Community CONTACT joins the rest of the community in saluting a wonderful woman.