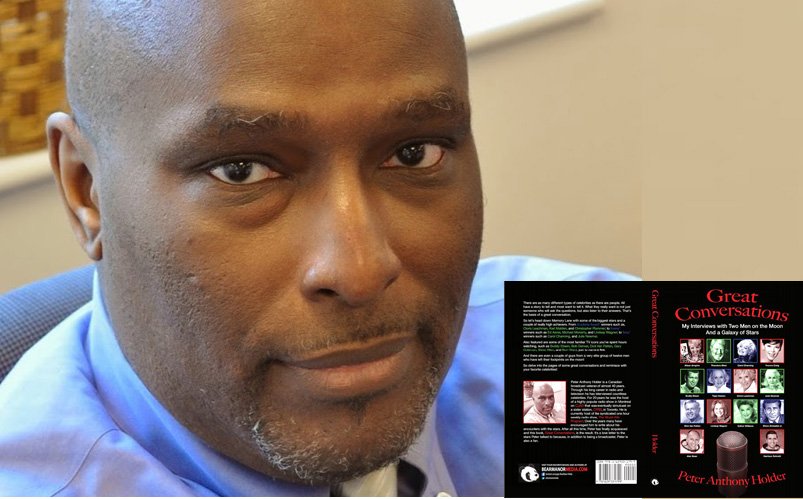 Broadcaster Peter Anthony Holder fashions a book out of his passion

In decades past, television and film was the centre of household entertainment, and the stars that appeared in those movies and shows occupied a special place in the lives of many families.
The way Peter Anthony Holder tells it, stories told by the celebrities of days of old can be as fascinating today as they were when these men and women ruled the screen and stage.
There lies the basis for his book Great Conversations: My Interviews with Two Men on the Moon And a Galaxy of Stars, which, as he says, chronicles the many encounters he has had talking to these celebrities on the radio.
“It’s a trip down memory lane with some of the biggest stars for all of us who grew up in front of the television and who spent many hours at the movies,” he told the CONTACT, describing the book.
Holder, who spent more than two decades as a broadcaster at CJAD Radio 800 AM where he had the privilege of speaking to hundreds of those stars and other celebrities, saw it as an opportunity to repackage about 31 of those interviews and share them with readers.
Among the many big personalities featured in the book are TV icons, such as Buddy Ebsen, Bob Denver, Dick Van Patten, Gary Coleman, Steve Allen, and Burt Ward. Then there are the luminaries of the big screen: Cloris Leachman, Karl Malden, Christopher Plummer, Ed Asner, Michael Moriarty, Lindsay Wagner, Carol Channing, and Julie Newmar.
Holder, who occupied different time slots on CJAD and stood out as a noted conversationalists, says some of his most memorable tête-à-têtes were with two women who were both hysterically funny, personable and great to speak with, Cloris Leachman, who up to this year, was the ‘winningest’ Emmy Award actress and who won an Academy Award for the movie The Last Picture Show, also Yvonne Craig who played Batgirl.
He says Craig’s passing in 2015 got him thinking about recapturing their conversation and sharing her story, and cites that as the foundational idea for the book.
He is also excited to share what he describes as “inspiring conversations” with two of the 12 astronauts who went to the moon: Allan Beam who was on the second Apollo Mission and Harrison Schmitt, who was on the last Apollo mission as a scientist before entering US politics.
After close to four decades in media, during which time he elevated to the top echelons of broadcasting on Montreal biggest English speaking radio station, then online with his own show, The Stuph Files, Holder also worked extensively with the Just For Laughs Festival and as a freelancer writer.
And with his wealth of information in store, Holder says the book came easily, taking only about six months to write.
Looking back, he says there’s exceptional value to each and everyone of the interviews and the conversations he has had over the decades, but for the book, it came down to choosing the most interesting.
In offering Great Conversations: My Interviews with Two Men on the Moon And a Galaxy of Stars, to readers around the world, Holder says he is confident that the book will stand as a manifestation of the universal appeal of entertainment.
It’s available in soft cover ($30.95) and hard cover ($38.04) and can be accessed at amazon.com. or peteranthonyholder.com, or peter@peteranthonyholder.com