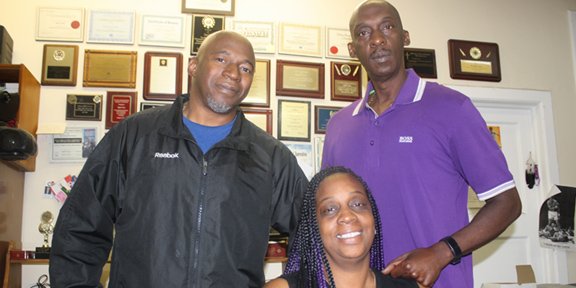 Thanksgiving Sunday at the Hampton Inn and Suites

If you’re over 40 and going out to party, then you should be doing so in an environment where the vibes are positive, and the music what we once loved, and among beautiful people like yourself.
That’s the way organizers of the annual Graduating Class Reunion Ball sees it.
And every year they make it their business to ensure that the settings are just right for their guests to enjoy a memorable evening.
“We cater exclusively to the no-drama generation who doesn’t mind the dress code and who want to enjoy music for dancing,” says Winston Murray, a renowned party promoter and the driving force behind this signature event.
“That’s why our goal has never been about turning a profit, just putting on a quality event.”
This year, on Sunday, October 7, the event is themed the Hotel Edition as it moves from the clubs to the Hampton Inn and Suites in the West Island.
And as it has been from the beginning, Murray, known on the scene as WD, is in it with his high-powered team of organizers, including life-long friends, Earl ‘The Pearl’ Henry and Everton Greene together with his sister Dianne.
Each brings a special talent that helps the Graduating Class to distinguish itself among other parties in the city.
Dianne, a nurse by training, is in charge of hospitality and getting guests in and out of the event with the least hassle.
She has a team made up of mostly her children and nieces each trained in areas such as bartending, security and handling money.
“They make my job easy, so I’m mostly there as a coordinator.”
The man known as “The Pearl” has a unique role as a link between the deejays and partygoers, roving the floor and ensuring that the vibes are always flowing in the right direction.
“I love to see people dancing,” says the veteran deejay, who cut his teeth on the local club scene back in the 1980s.
Green, recognized as a master from back in the day, continues to thrill Montrealers with his prowess in selecting and mixing tunes as DJ Spec II.
As usual, he will assist in coordinating the line-up of other deejays that will be providing music for the event. Two of them DJ Tuff and Eddie Lewis are considered icons and can be depended on to keep the vibes flowing between midnight to morning.
For the 10 to midnight slot, Murray and his team are turning the floor over to emerging deejays, Skizz and DJ Cookie G.
As the hundreds of partygoers that attend this Thanksgiving Sunday event every year know, The Graduating Class is a little more than your average party, indeed it’s an opportunity to celebrate what the scene was in Montreal in the 80s and 90s and early part of the last decades.
And there’ll be the usual giveaway of gifts and favors throughout the early part of the evening, together with a new addition to this year’s event: the sale of souvenir T-shirts.
Murray says: “We call ourselves The Graduating Class as we are now able to pass the knowledge we have acquired to the young while still being able to keep a connection with the elders.”