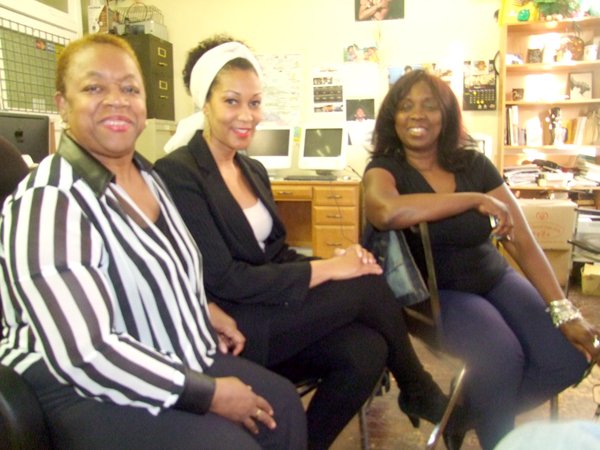 There was a time in this city when the Montreal Ebony Models provoked images of giltz, glamour and style. Back i

n those days
Jackie was the raving beauty that wowed audiences with every stride along the catwalk.
Dayle King was the artistic maven of dance and movement who choreographed every move to ensure the girls and guys showed the best of themselves and their attire.
And Gemma Raeburn Baynes, who always had a lifelong desire to stage an event, was the driving force behind the hundreds of shows that have made the group a household name on the local fashion landscape.
The group was also a potent force for good, raising tens of thousands of dollars for various causes around Montreal.
Officially launched in 1979, the Montreal Ebony Models count among its ranks over the years an illustrious line-up of personalities, some of whom have imprinted their names on the cultural landscape of Montreal and Canada, and others who have gone on to international repute.
Named among them are Ansonia Harrington, Lisa Osborne, Herby Seaman, Bob Cox, Charmaine Urquart, Hondo Flemming, Vivian Brown, John Ashby, Ann Raeburn, Charles Jordan, Edina Bayne, Wanda DeCastro, Lyn Griffiths, Debbie Hurley, Desiree Tucker and Marilyn Jones.
Many of them will revisit the catwalk on the weekend of May 7-9 for the big reunion event that is part of the Montreal Caribbean Fashion Week, which will be staged at the Concordia Multi-Faith Chaplaincy and at the nearby Oscar Peterson Concert Hall, both on the Loyola Campus at 7141 Sherbrooke Street West.
The event will bring over 30 local and international models and designers together for three electrifying days of show and styling with designs from Barbados, Guyana, Grenada, Trinidad and Tobago, Jamaica, St. Kitts, Haiti, Guadeloupe, New York, New Jersey, U.S. Virgin Islands, Toronto and Montreal.
Among the big name fashionistas from abroad who will be coming here are Athaliah Samuel, former Miss Trinidad and Tobago World and her compatriot Tyrone Nelson, Erin Griffith and Ramon Dotson and Alexis Campbell from Barbados, and Jessie-Ann Jessemy and Raquel Leid, Rehanna Warren from Grenada, Sonia Noel from Guyana and Malou Cadet from Haiti. Montreal Designers Mirmond, Angela Alexis, Maureen Wiltshire, Althea Thompson Toronto’s Mildred Lawrence-Tamssot and Cherith Burke.
All of it will come together under the masterful hands of creative director Richard Young of Trinidad and Tobago.
The event runs over three days under the theme: Chocolate, Wine and Fashion.
It opens on Thursday, May 7, Gala Red Carpet VIP evening, with an adventure of culinary delights, a “showstopper” fashion show offering piece de resistance of over 30 designers and live entertainment.
Fashion Fun Friday is on May 8; bringing together trendsetters of tomorrow and a hair design and beauty show featuring five top hairdressers and makeup artists.
Saturday May 9 will be an all-out glam party. Themed Fashion Night Out with Glitz and Glamour, it will be staged at the Oscar Peterson Concert Hall, also at 7141 Sherbrooke Street West.
Johanne Sternthal, fashion guru, author and philanthropist will be presented with a Lifetime Achievement Award for her work in the local and international fashion industry.
This sparkling evening will wrap up with a really cool After Party featuring Juno Award Nominee Freddie James.
“Not only are we emphasizing the talents of our local Caribbean Designers and Models, but we thought also to align and showcase what the Caribbean destinations have to offer”, says producer Gemma Raeburn-Baynes.
The event supports the Sickle Cell Anemia Association of Quebec. Doors open each night at 7:00 p.m. Shows starts at 8:00 p.m.
Tickets starts at $30 and are available at most West Indian Outlets or on-line at www.playmasmontreal.com Info: (514) 620-6612.