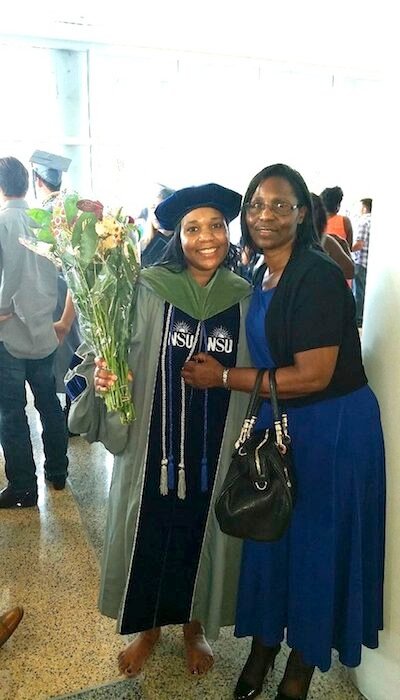 There is a lot of pride floating around Montreal, especially around Edgeton Allen (Father Eddgy) and his wide circle of family and friends over the recent achievement of his niece Keisha Johnson, who earned her Doctorate (DHSC) in Health Science in August from Nova University of South Florida.

Keisha left Jamaica at the age age of 4, for the USA. She blazed a trail of excellence throughout elementary, junior high and high school, earning several educational and community awards along the way, including one for leadership from the District Community Board Of South East Queens, New York.
At Thomas Edison High School she laid the foundation for her medical career, holding a place on the Honor Roll during her three years there.
At age 16, she was accepted and enrolled at West Virginia University where she completed a BSc in Medical Technology, followed by a MA (Hons.) in Organizational Leadership and Development at the University of the Rockies and was inducted into the International Golden Key Society. At Nova University of South Florida, she graduated with honors as Dr. Johnson.
She acknowledges that her mom, Phillipa Allen Johnson, has always been her bedrock of support.
Keisha has always been a regular visitor to Uncle Edgeton and her army of cousins in Montreal. In August, he returned the favor by making the trip with his wife to Fort Lauderdale, Florida, to celebrate Keisha Johnson’s graduation along with other family members from around the world.
The Montreal family would like to say congratulations to Dr. Keisha Johnson for her achievements and wish her continued success.