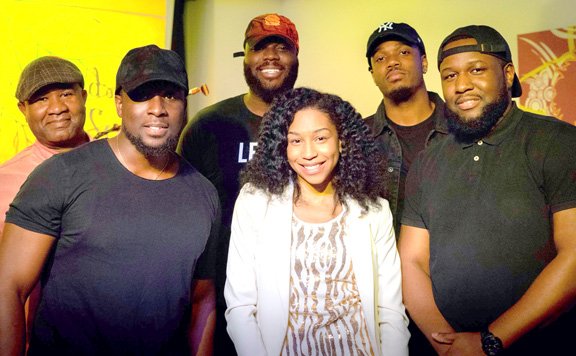 In a phrase, I was impressed.
I was able to get my hand on her EP, and after a careful listen of the production, I was immediately taken by the voice of the young up-and-coming Montreal singer, Aliah.
So I gave it another listen just to ensure that I had absorbed it all, that my ears were not deceiving me.
My conclusion? That girl is good.
So on Friday, June 1, I knew that I had to be there, at the Blue Print Lounge, in downtown Montreal for the official release of her first EP, Sounds of a Seed. I wasn’t disappointed.
I had already come to my conclusion; but wasn’t prepared for how much better she would be on stage. Aliah brought and delivered the goods… and left it all there for the crowd to relish.
True to form, she delivered what in a previous Montreal Community CONTACT article heralding her arrival as an eclectic collection of Jazz fuzed with Neo-Soul, old school hip-hop and a little bit of pop for good measure.
Throughout her performance Aliah simply delivered.
And aside from her musical stylings, I was blown away by her poise, confidence and professionalism she also brought to the stage. It was evident as she launched into her first song. Her voice was on point, and that quality was evident throughout the night.
That’s because her compositions are well crafted and poignant, and of a perfect length to avoid being considered self-indulgent.
And she was well supported by a band that was truly up to the task. They were tight.
One of  the highlights of the performance was when Aliah started scatting, an old musical style developed by Black performers of back-in-the-day. A very difficult vocal style, she did the old crooners justice, much to the delight and appreciation of the audience. My jaw dropped; it was musical perfection.
Yet another personal high point was Aliah’s rendition of an old standard “Summertime” the Ella Fitzgerald version from the stage production “Porgie & Bess.”
I felt like I was listening to Billie Holliday.
Aliah, this Montreal (West Island) native is ready. She has set herself on a path to success.
I enjoyed this EP launch and concert immensely. And will be sending my ticket home with you to have it autographed; I am sure it will be worth a small fortune in a very short time.