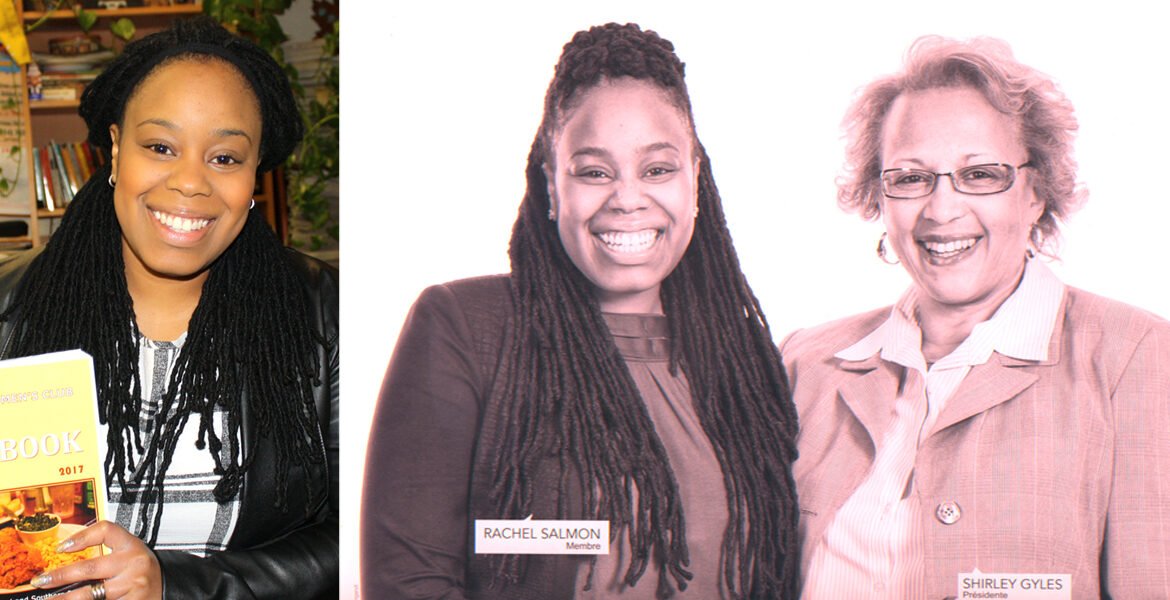 At 33-years-old, Rachel Salmon is mindful of the significance of the task handed to her when she assumed leadership of the Colored Women’s Club of Montreal (CWC), the oldest organization of its kind in Canada and a foundational one for our community.
Founded in 1902 by seven American women, wives of railroad porters, the CWC was built on service to the community, providing much needed relief to those on the margins of society.
The women, many of them Black Cross nurses tended to the sick and provided care to soldiers returning from the Boer War in South Africa and from WW1. They also organized a soup kitchen and purchased burial plots for the needy.
According to Salmon, the CWC, which modeled itself after the National Association of Coloured Women’s Club founded in Washington, DC, by freedom fighter and civil rights icons Harriet Tubman, Ida B. Wells and Mary Church Terrell, was totally dedicated to supporting black people in the Montreal area and to promote education.
And she sees it as privilege to be able to carry on the work undertaken by these brave women of yesteryear.
“Taking on this role is me carrying the torch, taking up the mantle and ensuring that their dream and their vision for our community live on,” she told the CONTACT at a recent sit down at our offices. “It’s an honor and I take it with absolute humility.”
Salmon, an entrepreneur for the past 14 years is the owner of Salon Rayshell one of the most popular beauty institutions in the city. She is also a wife and the mother of two teenagers.

She says while the focus remains on community, the emphasis for the CWC these days is on education.
“We are quite aware that living the life of your dreams starts with a good education,” she says. “And we all know that getting an education comes with its fair share of financial strain (so) we provide scholarships to deserving students within the Black community, and have been doing so for over 20 years.”
She says every year the Club awards scholarships to one or two deserving student at their Black History Month Soirée, Spring Hat Rose Tea and their Dinner Gala.
The number of scholarships handed out each year usually depends on monies raised at these events and through other fundraising initiatives.
While not divulging too much information on the amount of money, Salmon says it’s a significant sum meant…? and their commitment to the student is a little more far-reaching.
It’s meant to lift some of the financial strain, she says. “Providing these scholarships does not only help them financially, it’s also telling them we are here for you, we acknowledged your efforts, your determination and we are rooting for you.”
And she added that it’s an investment that goes beyond the student. “These young students will become husbands and wives, and raise families of their own. Not only are we investing in their lives, we are empowering and strengthening future Black families.”
Salmon says the satisfaction she draws impacting on young lives is just part of what makes her involvement with CWC so meaningful.
“It’s also a lot of fun to (interact) with the other members. We meet on the last Sunday of every month at one of the women’s home, they provide lunch and we discuss our agenda,” she says. “For us it’s also about the fellowship and unity that comes with being with each other.”
She says she was drawn to the club in 2011 by a woman who was a mentor and immediately taken in by that camaraderie and sense of purpose of the women.
When she was elected president last year, she was the youngest member of the club and was following in the footsteps of Shirley Gyles who held the position for about 20 years. She said she spent much of 2017 prepping for the task ahead.
“I have nothing but respect and admiration for Shirley. I shadowed her for almost a whole year and learned a lot from the way she does things and her approach.”
But she is prepared, she says, to put her stamp on the organization.
“I want to open it up to new members, especially young ones. My focus will be to encourage young women to be part of the sisterhood. A lot of them still don’t know about the club but I intend to change that.”
She says they recently set up a Facebook page that’s drawing a lot of inquiries from women across the city.
“We are looking for like-minded women that are driven that have a heart to serve and that want to give back to their community.”
Among its many activities throughout the year are trips across North America and around the world.
Over the years, the CWC members have journeyed to countries in Africa, including Senegal, Kenya, Morocco and South Africa, and extensively traced the trails of the Underground Railroad. The women recently returned from Hawaii.
She is also excited about their popular cookbook that’s back on the market.
The 330-page Millennium Cookbook originally published in the mid 1990s, and revised and reprinted in 2017, is described as “a mélange of island and southern recipes.” It includes favorites from many of the CWC members, past and present.
As she prepares to guide the CWC into the future, Salmon says her vision is rooted in the past and driven by the daring of seven intrepid women whose selfless commitment made the cause of community theirs.
“Our founding mothers are rejoicing… why?  Because The Coloured Women’s Club is still standing. We are still thriving….”
Salmon invites Montrealers to join members of the CWC at their first scholarship fundraiser of the year. The Black History Month Soiré takes place on Saturday, February 24 at 6767 Cote des Neiges Road, from 6:00 PM.
Rhythm and Soul will celebrate local talent: it’s an evening of fashion, music, Spoken Word… featuring West-Can Folk Performing and Roen Blu R’va Higgins, fashion & jewelry segment by S. Spence Creations, Doris Day Fashions, Wanjiru Designs and so much more.  For more information, contact Rachel Salmon at 514-481-2635 or Shirley Gyles at 450-672-7081, or Naomi Philip at 514-365-7774.