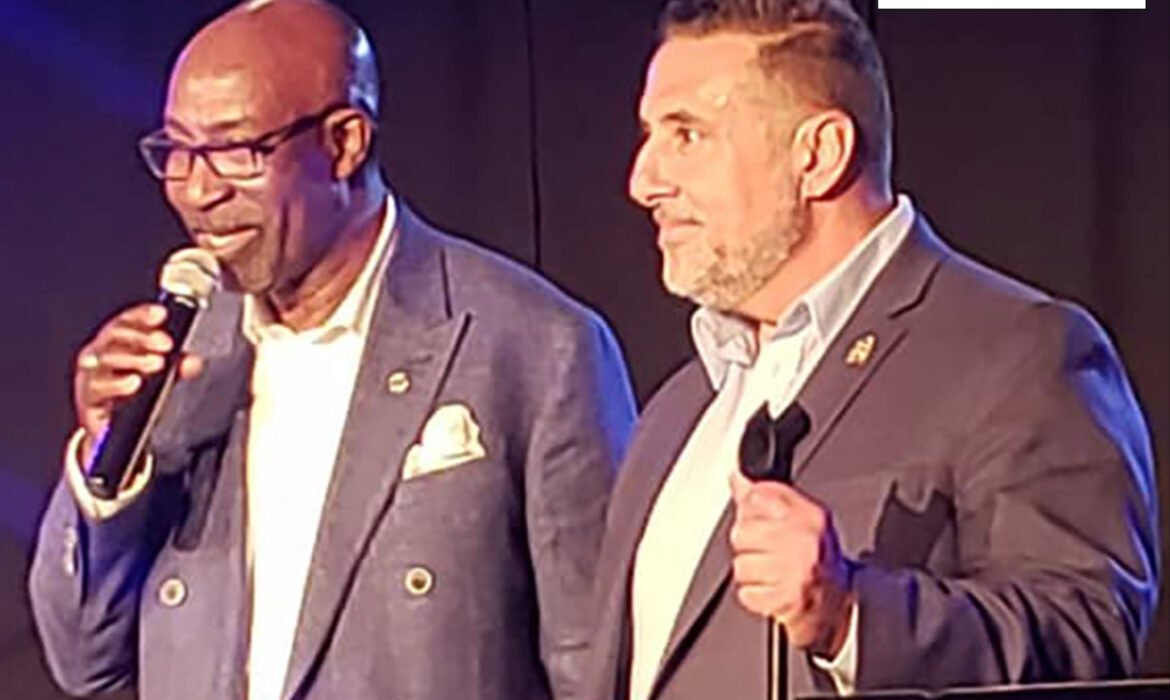 The West Island Blues Festival is back. On July 9, the 18th annual edition of the event returns to the outdoors at Dollard des Ormeaux Park after a two-year hiatus.
Since 2003, Errol Johnson, who is a long-serving city councillor and deputy mayor in Dollard des Ormeaux joined forces with Jim Beis, mayor of Pierrefonds to put together the free day-long festival, which doubles as a fundraiser that has donated over 250 000$, to various West Island organizations over the years.
In a recent telephone conversations, the two friends reminisce on the origins of the West Island Blues Fest, as well as their relationship.
It was in the early 2000s, when Johnson conceived the idea of staging the festival. In seeking assistance from the City of Dollard des Ormeaux and was introduced to Beis, who worked for the city at the time.
According to Johnson it was the beginning of a collaboration that continues today.

“I spoke with the city of Dollard and got permission to use one of their parks for the festival. And from there, Jim Beis who at that point in time was working for the city Dollard. He was the department head of Sports and Recreation and so we joined forces because he also loves music. He’s an avid fan of the band Kiss so we had something in common with music.”
Choosing Blues as the genre in focus was easy for Johnson whose love of music goes way back. “Naturally coming from Jamaica, most people would figure I’d say, ‘Let me have a Reggae fest,’ but I like Blues because of the guitar licks, and I find it to be sort of soothing music.”

In their university days, Johnson played guitar as did Beis.
Errol professed to being a bluesman while Jim took to heavy metal.
However, they say it was an easy decision agreeing on a Blues festival (a Black genre of music that historically gave voice to the voiceless. )
A happy coincidence that the roots of Blues mirror the festival’s goals.
Beis says: “Blues being the foundation of many genres was fitting for us because Blues was the music that was created to raise awareness in society. When we do these events, yes it’s music, yes it’s a free outdoor concert, but what it does is raise awareness for organizations that have been around for decades.”
Over the years, the Blues Fest has been raising money for numerous charities and organizations such as the West Island Black Community Association (WIBCA), which received all funds raised in 2003, to assist with renovations for the building they owned.
Nearly 20 years later, the West Island Blues Festival is growing in popularity, having the potential of reaching multiple stages in different locations or perhaps holding it elsewhere in the West Island, though nothing is secure yet.
But it stays true to its founding goals: an exciting outdoor show for the West Island and contributing to social programs and charities that, in return, benefit the area.
This year’s chosen charities are Literacy Unlimited, AJOI, West Island Women’s Shelter, Alzheimer Groupe Inc., and WIBCA.
No matter what, the festival will remain in the West Island, assures Jim Beis,

“It’s really about why we name it West Island Blues Festival, we looked at it as a West Island gathering. That’s why we never called it the Dollard Festival or the Pierrefonds Festival. It was the West Island’s festival and that’s what we’re about.”

He added that the festival’s small-ish scale (5000-6000 in attendance) gives the community a sense of local intimacy.
“Community for us has never been about how big you’re perceived. For us, we’re big to the point where we are much bigger than we’ve ever anticipated. Being it still generates a brand that people talk about as a signature event in the West Island
And despite the festival having Blues in the name, the event, much like the Jazz Festival, is diverse in sound.
Johnson says: “no it’s no purist thing. You know if you want to attract a decent crowd you have to be flexible.”

Without a doubt, the festival is a success.
The VIP show sold out, an indication of the people’s eagerness to participate in activities after two years of Covid affecting virtually every part of social gatherings.
Going back to a traditional outdoor event for the first time since 2019, this Blues Fest is off to a good start for another strong collaboration between Errol Johnson and Jim Beis.
Johnson agrees that the two make a good team replied, “He was there from day one. I had the initial idea of starting the festival but without his help in terms of logistics and getting those fundamental things done, it could not have happened.”