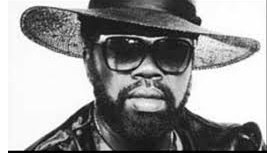 The passing of a calypso legend…

When we became aware of him in 1974, Winston Bailey was exactly what the calypso world craved: something different.
There he was, a seemingly tall man, Black man, dressed in all black, covered by a black cloak, and a big black hat that hid his face. He never smiled because he was always entranced in his music… music that was colored by its driving and pulsating rhythms…. The Shadow.
He captivated calypso lovers as he delivered his songs standing straight and rigid in the middle of the stage, periodically elevating into the air Maasai-style right on the spot.
In an era dominated by two of the greatest calypsonians that walked the earth, The Mighty Sparrow and The Lord Kitchener, Shadow had to stake his place on the scene.
And he did.
First, with two of the most popular songs of any carnival season, “Bassman” and “I Come Out To Play” in 1974, which easily won him the Road March and the runner’s up position. The popularity of I Come Out To Play was further enhanced when a small steelband from east Trinidad,  Scherzando, played it at the Panorama competition and almost upset all the big bands of the day.
In the years following, Shadow continued to mesmerize the calypso world with a string of hits, including Constant Jamming and Shift Your Carcass, Jump Judges Jump, Children Ting, Columbus Lied, Tan Tan, Swing The Thing, Poverty Is Hell, Tension, and Dingolay.
In 2000 he became one of only few Road March holders to win the Calypso Monarch crown, with  “What’s Wrong With Me” and “Scratch Meh Back.”
A year later, in 2001, he added a punctuation mark on his career by winning the Road March crown again with a jumpy little ditty, titled, “Stranger” and followed it up by winning the International Soca competition, the oldest person to do so.
After almost 50 years on the calypso scene, Shadow was able to connect with multiple generation of fans, all drawn to his embracing personality and the throbbing rhythms that came with his mega hits, such as Looking for Horn, Cocoyea, Horner Man Horning, and what You Come Here For.
The man who was born in Belmont, on the outskirts of Port of Spain spent some time in Les Couteaux, Tobago and went back to Trinidad with a bassman from Hell called Farrell, died on October 23 after suffering a massive stroke a few days earlier. He was 77.
He leaves an army of fans in Trinidad, Tobago, across the Caribbean and around the world wanting more.