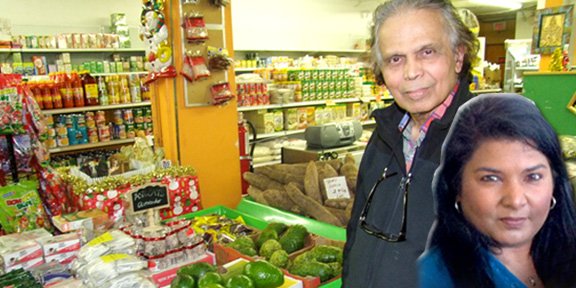 “When you’re in the middle of a hurricane and you see stuff coming at you from all directions, it’s difficult to decide what to focus on and how to protect yourself.”
So it was for Emily Ramdas, her brother Brandon, and the rest of the family over the past year or two as they struggled to keep open the doors of Montreal’s oldest Caribbean grocery store, Ramdas Foods, located at 1503 Dollard Avenue in LaSalle.
Sadly, they were overwhelmed by a perfect storm of family predicaments together with external challenges and were forced to make one of the toughest decisions of their lives.
“We made the decision last Saturday, (August 25). We had no other choice,” she told the CONTACT in a telephone interview. “To continue means that it will go on affecting our personal lives in a negative way. So we decided to close the doors for the last time on Friday, August 31.”
In September the store, which carried an endless supply of food products, spices and provisions catering to clients from the Caribbean, Latin America and India, as well as other Montrealers, would have celebrated its 44th year in business.
“After the decision was made, I felt this overwhelming sense of loss,” Ms. Ramdas says.
“You see, I’ve always felt safe within the confines of the store, as if I were always in the presence of family. Because, many of those who came in were like mothers, fathers, aunties and uncles to me. Now I feel as if I have no way of connecting with them.”
Emily, who took charge of running the business last August, came at a time of   extreme turbulence. It wasn’t long after one of her aunts died and her parents were experiencing various forms of failing health.
Also, the once thriving business became caught in a spiral of bad occurrences, the most pronounced of which was the extended period of roadwork in 2016 that hindered customers from easily accessing the store.
By the time the work was completed, Dollard Avenue was reconfigured and   the entrance was closed to southbound traffic.
Emily says it was the beginning of the end.
“Even I wasn’t able to get to the store without making a U-turn or committing some other traffic infraction.”
She says clients were driven away by the droves.
“I figured by the time it all ended we lost about 90 per cent of our customers who came to us by car.”
And it was the beginning of the domino effect.
“Because our sales dropped, we couldn’t buy in the amounts that we were accustomed to, and that impacted on our relationships with our suppliers because we had difficulties meeting our payments to them.”
Then came the family-related challenges as her mother became stricken with a life threatening ailment and became hospital-bound, and her father, who has a long history of heart disease, no longer able to be in the store he built and nurtured single-handedly.
Her mother, Mrs. Savitri Ramdas died on January 16, 2018.
Emily and her brother Brandon who had decided to invest themselves and their little personal resources and do what they can to sustain the family business, but before long they realized that they were caught in a full-fledged storm.
And although she too was dealing with her own medical and other personal issues, Emily embarked on a crusade to try to get clients back into the store, becoming a little bit of a political activist in the process.
Her repeated calls on the City of LaSalle to change the configuration to allow easier access to the little Strip mall where the store is located fell on deaf ears.
She started a petition, collected thousands of names and went on a media blitz and an online campaign. But it was all for naught.
She is heartened however by the many Montrealers who heard her cries and supported her campaign. And although they couldn’t avoid the inevitable, she’s proud of the efforts that she and brother Brandon, other members of the family and staff put in to salvage the store that was a foundational institution in Montreal.
Mr. Raymond Ramdas ventured into the food business in September 1979 after he recognized a growing need among the burgeoning Caribbean community to eat the food they grew up on. He opened Ramdas Foods at the Atwater Market. His rent at the time was $79 a month.
One year later he expanded the business and opened the LaSalle outlet, then made one or two forays in the Cote des Neiges area, on Victoria Street, then on Van Horne, which lasted for a few years.
For his pioneering entrepreneurial drive, Raymond was recognized by Montreal Community CONTACT as a Community Builder at a signature event in September 2016.
Looking beyond what she describes as a “setback,” Emily Ramdas carries the drive of her dad and sees herself and a family business emerging out of the ashes of this one.
“I have the plan, I have the willpower. I’m just hoping to find the right investors or partners.”