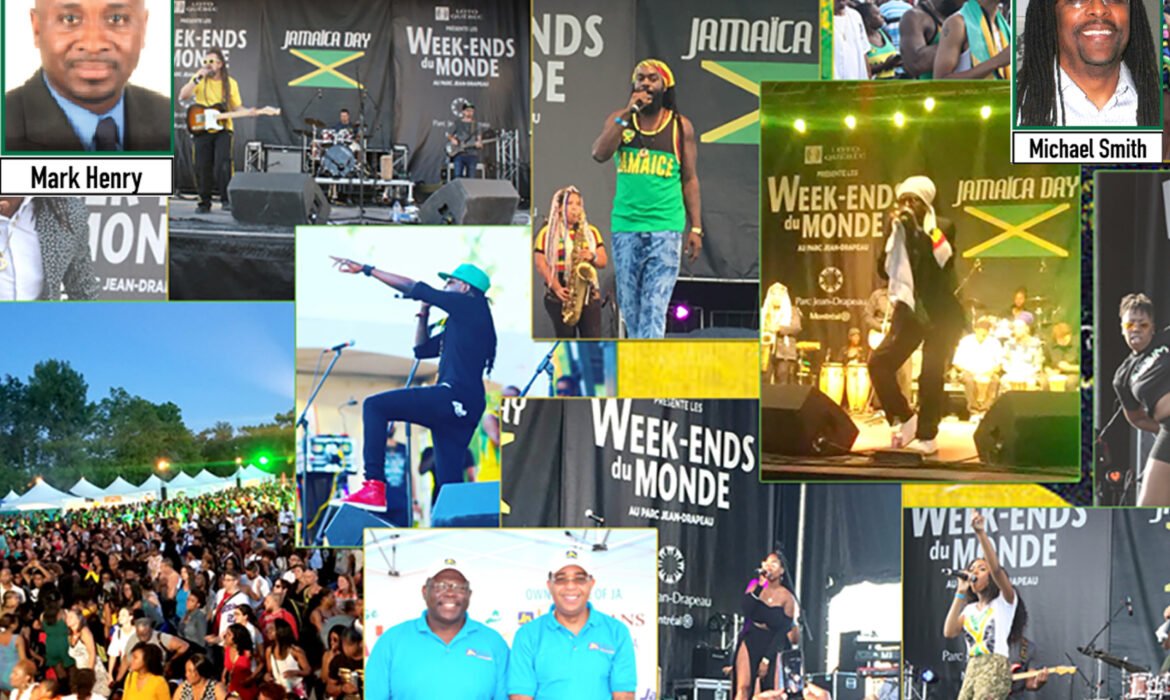 Cue strains of Bob Marley’s ‘One Love’ with wisps of smoke carrying the smell of jerk seasoning and other delightful scents in the mid-summer sunshine and breeze on the island that is Parc Drapeau….
For the past four decades or so, Jamaica Day, the annual celebration of music, food, arts and crafts and everything Jamaica has been ‘nicing-up’ Montreal, as one of the biggest outdoor festivals in our community.
However, the event has been in jeopardy because of some sour notes and out-of-timing ruminations as two competing groups of organizers claim ownership of The Day and the rights to host it.
Mark Henry president of the Jamaica Association of Montreal and his 1st vice-president Sharon Nelson have been on a public campaign over the past several months to reclaim Jamaica Day as one of the organization’s signature events.
It was first held at Kent Park in Cote des Neiges in 1980 and quickly became a staple on the city’s summertime cultural calendar over the following 40-something years.
Henry says since assuming office in 2019, he has come to realize that the event has been taken over by the the past president of the association who has made it “a one-man show” and made himself answerable to no one.
Much of this has to do with what might be a conflict between the association and a foundation that it established in 1988 as a way to raise funds to assist recovery efforts in Jamaica during the crisis of Hurricane Gilbert.
Henry the says the two entities have been sharing the same management board since the establishment of the Jamaica Association of Montreal Foundation but was forced to disentangle due to stipulations by one of the funders of the association.
And it is under the title of the foundation that the past president has been applying for the licences and rights to stage Jamaica Day.
More troubling says Henry is the fact that the past president saw it fit to hand pick a new board of directors for the Foundation as a way of consolidating his ultimate control and facilitate its total divorce from the association.
The problem with all that according to Henry, who was elected president of the association in December 2019, is the fact that Foundation is one of the mechanisms through which people can make donations to the organization and receive a charitable receipt. So it has to remain an arm of the association.
However, much of that function has become moot since the Foundation lost its charitable status in 2021 .
Henry says there have been several unsuccessful mediation efforts to resolve the impasse and he has reached a point where he can’t compromise on what is right for the association.
Michael Smith served as president of the Jamaica Association between 2016 and 2019 and presided over its separation from the Foundation.
He said it was what the funders demanded andc the two entities that emerged were completely separate from each other. And as it was the foundation was best positioned to stage the Jamaica Day festivities.
He says accusations of him taking over Jamaica Day and exerting control ring hollow since he has been the main organizer of the event on behalf of the association since 2000, when he brought on board to do so by past president Noel Alexander. And has been doing so almost singlehandedly ever since.
He says his intentions have always been to stage an event that reflects the dignity and vibrancy of Jamaica and at the same time try to erode some of the nasty perceptions that were circulating about Jamaicans in the city at certain times.
And from feedback, he did a pretty good job.
It was never about money, he says, because the event is not a money-maker. He pointed to the last one staged in 2019 , which drew 22,000 attendees. The net take after all expenses, he said, was about $4,000, which had to be reserved as “seed money” for the next event.
However, it’s all water under the bridge he asserted, because the bickering and ugliness have taken a toll on his patience… not to mention repeated instances where his life has been threatened.
So he has decided to walk away from it all and as far as he’s concerned, he will not be applying for any licenses to staging any version of Jamaica Day in the future.
Earlier this month, the City of Montreal announced that for the third year it was cancelling Weekends du Monde, the package of events that Jamaica Day hsd been a part of, on Parc Drapeau.
The City and Société du Parc-Jean Drapeau blamed the cancellation on labour shortage and increasing costs for infrastructure and organizing the events.