Nigel Thomas brings an enlightened perspective to the art of writing 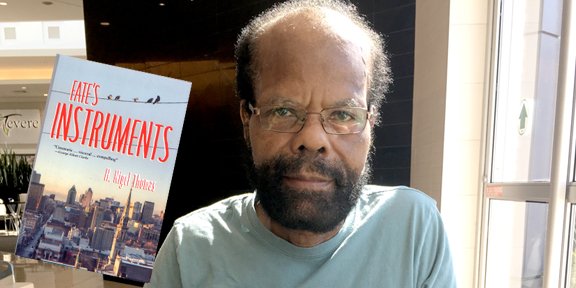 Montreal novelist H. Nigel Thomas gives what he considers to be a simple reason for writing: “I feel a compulsion to explore the complex mystery that is the human animal.”
A compulsion made even more urgent after thoroughly consuming two novels by renowned Trinidad and Tobago author, Earl Lovelace, “The Dragon Can’t Dance”, and “Wine of Astonishment,” along with the political masterpiece “Salt Eaters” from the late Toni Cade Bambara, a provocative African-American, author/film-maker.
“I was really taken by their storytelling style and it made me aware that I could write, I knew that I had stuff in me that I wanted to say.”
His instincts about his capacity to tell stories were right on target because his first book “Spirits in the Dark” sparked interest from multiple publishers, forcing him to choose between two of the more credible ones, a luxury not usually afforded to rookie writers.
In the 25 years that he has been putting pen to paper as a storyteller, the St. Vincent and The Grenadines-born former university professor has emerged as a formidable force of enlightenment with a series of books that attempt to unpeel the complexities around issues such as social justice, homosexuality, the immigrant experience in the metropolis and, more importantly to him, the inter-play between colonialism and Caribbean life.
“A commonplace observation dramatized in my writing is: power does a poor job of regulating itself. Colonial domination, under which I lived for the first 21 years of my life, furnished me with numerous examples of this.”
Through it all Thomas stands out as what George Elliot Clarke describes as “a master storyteller” in the vein of James Baldwin, the novelist he (Thomas) admires most.
His most recent book, Fate’s Instrument, has been winning acclaim from reviewers including Clarke who describes it as “cinematic in its scenes. Visceral in its plot, compelling in its characters…’” and a “globe-trotting, moveable feast of a novel (that) is a page-turning, savvy Gothic Romance of the heart.”
The book, the second in the No Safeguards trilogy, traces the lives of individual members of a Vincentian family as they try to heal wounds of the past. In it, one of the brothers, Paul, has made his way to Montreal before moving to Central America to be with his partner.
His life goes awry after the breaking up of his relationship and being stricken with cancer then seeking solace in the presence of a close circle of friends.
So far, two of Thomas’ books, “Spirits in The Dark” and “No Safeguards,” have been shortlisted for the Hugh MacLennan Prize for Fiction.
Thomas, who moved to Montreal in 1968, at the age of 21 blazed a trail of academic glory on his way to becoming a writer.
While pursuing his passion and working as a nurse at the Douglas Hospital, he completed a BA at Concordia University in 1974 and a Master’s Degree in 1975 followed by a Diploma in Secondary Education from McGill University.
He taught for 12 years with the then Protestant School Board of Greater Montreal while earning his PhD from the University of Montreal in 1986.
In 1988, Thomas took a position as an associate professor of African American Literature at the University of Laval, where he remained until 2006.
On October 24, Thomas will launch Fate’s Instrument at Paragraphe Bookstore, 2220 Avenue McGill College Montreal, QC H3A 3P9 at 6:30 pm. It’s a joint  book launch with Robin Blackburn McBride.
You can also check him out at the following venues:
Tuesday, October 16, 2018: 7:30 pm. Visual Arts Centre Readings: 350 Victoria Avenue, Westmount. Tel: 514-488-9558; Sunday, November  11, 2018: 10 am. Books & Breakfast. Le Centre Sheraton Montreal, 1201 BLVD. Rene-Levesque West.