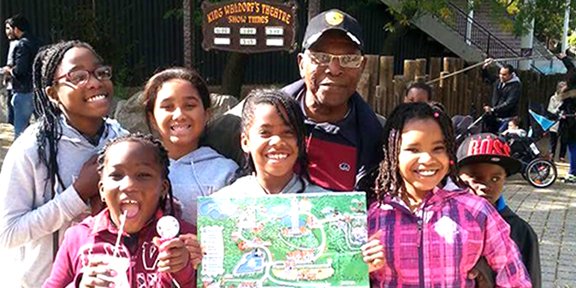 There’re thousands of men and women at all strata of society walking around Montreal, Canada, across North America and beyond whose lives have been impacted by having crossed paths with Mr. Oswald Allen.
Probably the one guy who can truly be described as a lifelong educator, Mr. Allen almost single-handedly built the Cote-des-Neiges Daycare Centre into a cornerstone of community life in Cote-des-Neiges and a foundational institution for Black and Caribbean people.
It was October 15, 1973 to be exact, when he opened the doors of the Cote-des- Neiges Black Community Preschool to offer support to young parents looking for a place for their pre-schoolers.
Today, 45 years later, thousands of Montrealers have received their initial preparation for school and for life from Mr. Allen and his staff at the daycare.
“We have been fortunate to have had on-going support from the Black community and from the Cote-des-Neiges community,” says Mr. Allen in a recent telephone interview. “That support has been crucial in helping us maintain the quality of care and services that we have been able to offer.”
Today, the daycare centre housed on the ground floor of Coronation Elementary School on Van Horne, corner of Victoria, remains a fixture in the uptown neighborhood, vital to parents seeking to access a place in Quebec’s so-called $7-a-day childcare system.
About 15 educators and support workers staff the centre, which operates on about a $1 million-a-year budget, mostly for salaries. It accommodates about 45 children between the ages of 18 months and five years, every year.

And although it is still entrenched in our community, Mr. Allen notes that he’s seeing an increasing number of children from new immigrant families from the Middle East, Southeast Asia and other parts of the world.
Mr. Allen says over the years there have been a few challenges along the way, particularly in keeping the numbers steady and dealing with various governments over the years pertaining to funding.
But he maintains that with the support of those who help him manage the centre and its reliable staff, it has been  smooth sailing  for the most part.
Quebec is the only province in Canada to offer universal daycare services to parents with an estimated 250,000 Quebec children attending some form of daycare in the province at a cost of $2.5 billion to the government.
Parents pay $7.75 a day to participate in the public system.
Mr. Allen looks back at what it has taken to keep his institution vital and relevant for more than four-and-a-half decades in a system that’s been through more than its fair share of changes and in a community where many parents  have been categorized as marginalized.
He says it was modeled after the Headstart Program in New York in the ‘70s, when governments started putting money towards educating children four-years-old and younger as a way to build and salvage marginalized families and communities.
He came to Canada from St. Vincent and the Grenadines where he was an educator. After completing Teachers’ Training College, he served as a principal at several      schools before migrating to Canada in 1971.
Once here, he immediately got involved with the Cote-des-Neiges Project, serving as its education coordinator, where part of his job was to go into high school and try to assist the many Black students that were falling through the cracks in the education system.
He also organized an annual summer camp for the Project, as it was called. And it was out of this summer camp that the daycare was founded.
He says he always has been fortunate to have the support of the local school board to provide rental space for the daycare.
The first location was at the Logan Elementary School at the corner of Darlington and Van Horne before moving to Van Horne Elementary in 1979, then to Coronation Elementary on Vezina Street in 1982, then to their current location in 1997.
In marking this landmark anniversary, Mr. Allen remains careful never to forget the tough days in building the daycare centre to what it is today.
“We’ve come a long way since the early days when I was driving a school bus to various parts of the city picking up children as far off as Park Extension, Ville St. Laurent and NDG.
“But after the government demanded that we provide snacks and lunch, we could no longer provide transportation for free and most parents couldn’t afford to pay for it, so we stopped it.”
But together with the tough times were the many exhilarating moments as he maintained a front seat in seeing how the daycare impacted the lives of families in positive ways.
“I still meet former students, who are doing very well in life and who remember being part of the Cote-des-Neiges daycare family that for me is my greatest reward.”
The Cote-des-Neiges Daycare Centre celebrates its 45th Anniversary with a Gala Banquet and Ball at Schofield Hall in Town of Mount Royal on Saturday, May 26.
In addition to the culinary adventure that they have prepared for visitors, there’s a list of top-level performers on hand to provide entertainment for the evening, including Mirielle Philosca, Cleopatra Marshall, CC Walker, Pete Douglas and Wes Can Folk Performing Company.

Guests at the annual Cote des Neiges Daycare Centre Banquet and Ball have come to expect the very best in dining, entertainment, and the many other delights that the evening promises every year.
On Saturday, May 26, organizers plan on continuing the tradition. So those in attendance can expect the chefs at Bestbite Catering will be going above and beyond to serve up a culinary treat not experienced at any other event in our community. So it has always been, and so it shall be, especially for the Centre’s 45th Anniversary.
So too it will be with the entertainment.
One of the highlights of the evening will undoubtedly be listening to the incomparable Mirielle Philosca, who for years has been thrilling audiences at this event with her sensational voice and ability to transcend genres, moving easily from Gospel to jazz and blues to contemporary as she chooses. Always, Mirielle delivers a command performance.
Just as entrancing will be Cleopatra Marshall, another mainstay of this event. Whether solo or together with her husband, CC Walker, Cleo brings a powerful presence to the stage and has earned her reputation as one of our best singers.
Walker, a heart-warming crooner, is also expected to spread his charms with his soulful expressions.
An integral part of the musical tradition of this event is the appearance of Pete Douglas who shamelessly steals the hearts of women with his heart-churning voice and capacity to invoke nostalgia as he brings back some of the oldies.
However, the spark of the evening will be the much-anticipated performance by West Can Folk Performing Company, who has earned the distinction of being the cultural ambassadors of the Black and Caribbean community.
Egbert Gaye, managing editor of Montreal Community CONTACT, will be the featured speaker.
Montrealers owe it to themselves to celebrate with Mr. Allen, his staff, parents and supporters of The Cote des Neiges Daycare Center as they mark their 45th anniversary.
It takes place Saturday, May 26, at Schofield Hall, TMR from 6:00 PM to 2:00 AM
Info: 514-733-1397.